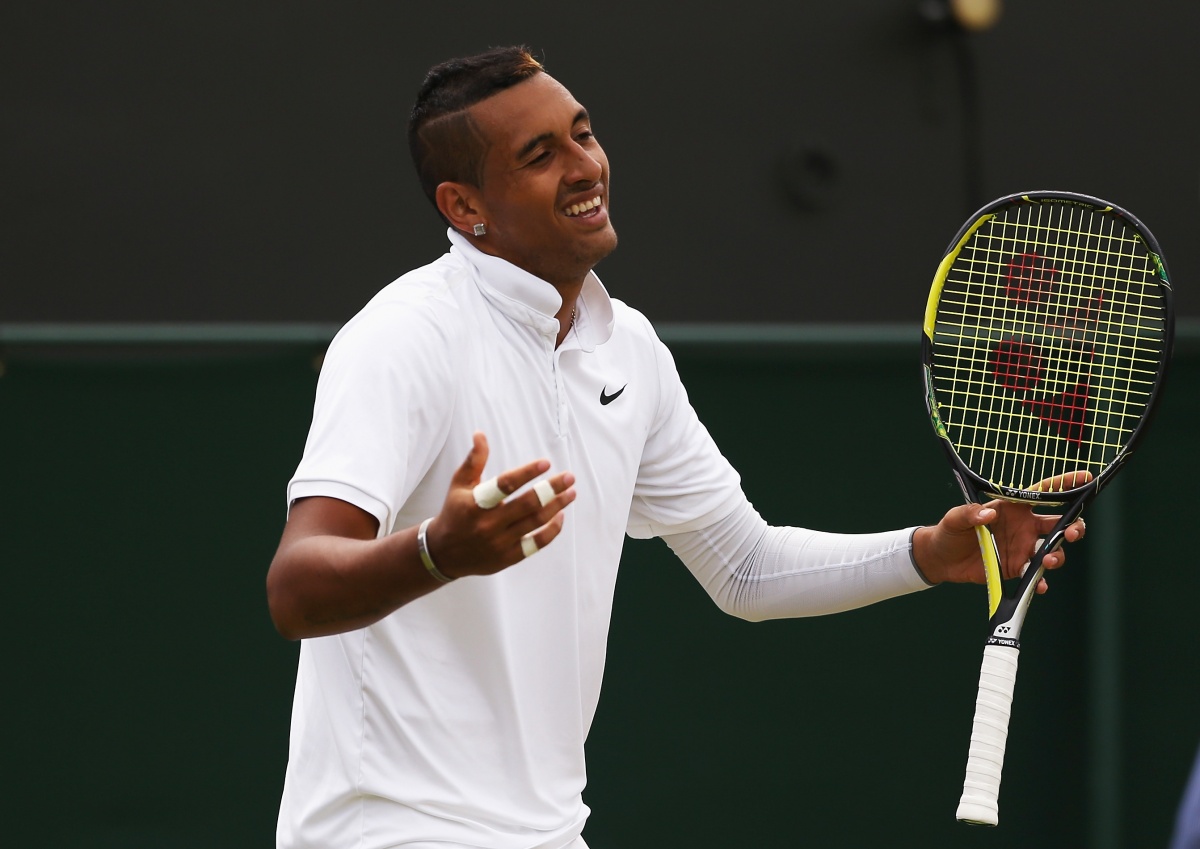 Nick Kyrgios has made a typically volatile Wimbledon exit, the tennis enigma accused of tanking during a rollercoaster four-set fourth-round loss to classy Frenchman Richard Gasquet.

Kyrgios came into the match with hopes of winning the title after taking out world No.8 Milos Raonic with a scintillating third-round display.

His march to the last 16, following his heroics at the All England Club last year and another quarter-final charge at the Australian Open, had tennis greats Mats Wilander, John McEnroe and John Newcombe agreeing it would be crazy to write the young sensation off.

But Kyrgios fought with his players’ box, cursed himself as “so dumb, so dumb” and blatantly didn’t try in one return game during an eventful encounter on the very same Show Court Two in which he saved a grand slam-record nine match points to conquer Gasquet last year.

He saved two match points in the third set and held two set points in the fourth set to raise hopes of another famous comeback win.

Lightning didn’t strike twice, though, as Kyrgios surrendered the match with his 10th double-fault in the fourth-set tiebreaker, bowing out after two hours and 53 minutes.

There was nothing to suggest Kyrgios wouldn’t blow Gasquet off the court after he broke the 21st seed in the opening game with a blaze of winners.

But Gasquet hit back with a scorching forehand pass to level proceedings at 2-2 before Kyrgios unravelled.

Constantly under pressure as Gasquet began to prey on his second serve, Kyrgios conceded the first set with a netted forehand.

Kyrgios’ struggles continued in the second set as he twice double-faulted and barely tried in the fourth game before falling behind 5-0.

Seemingly upset with his racquet stringing, Kyrgios took his frustrations out on his manager John Morris, now also coaching the firebrand after he split with Todd Larkham on the eve of the championships.

“Thanks, you guys, thanks,” he said, pointing to his support staff.

“I asked for one thing. One thing.”

Kyrgios then received a code violation and could be heard telling someone in the crowd to “just leave”.

He avoided a bagel but still dropped the second set in just 24 minutes amid a flurry of wild errors.

Kyrgios continued to chide himself but briefly surged to raise hopes of another fightback after famously recovering from two sets down against Gasquet in the second round last year.

But even after charging to a 3-0 lead, Kyrgios never appeared comfortable.

Irritated by the chair umpire’s hurry-up during another changeover, he said: “Mate, Rafa (Nadal) and stuff take 30 seconds between points. I’m just changing my socks.

“Do you want to ask him? Richard, I’m just changing my socks.

Kyrgios sought a hug from a ball boy after netting a routine forehand volley to give up his third-set break as Gasquet levelled at 3-3.

“I don’t know what’s going on,” he then muttered after firing a forehand wide to stand on the brink of defeat at break points down serving at 4-4.

A double-fault from Gasquet gifted Kyrgios a set point, but the one-time semi-finalist produced a breathtaking round-the-net-post backhand winner from metres outside the court.

Kyrgios netted an attempted backhand pass on his second set point and was livid with umpire James Keothavong after a successful challenge showed his shot caught the baseline.

“This is bullshit, mate,” Kyrgios fumed at Keothavong before the point was replayed rather than Gasquet having to face another break point.

Kyrgios unleashed a blistering backhand pass and then hooked a courageous forehand winner to save match points in the tiebreaker before stealing the set with a forehand thunderbolt.

He let out a mighty roar in celebration as Gasquet obliterated his racquet to earn his own code violation.

But Gasquet regained his composure as Kyrgios lost his nerve, double-faulting on his first set point and netting a backhand on his second, as the Frenchman booked a quarter-final against either fourth-seeded French Open champion Stan Wawrinka or Belgian David Goffin.