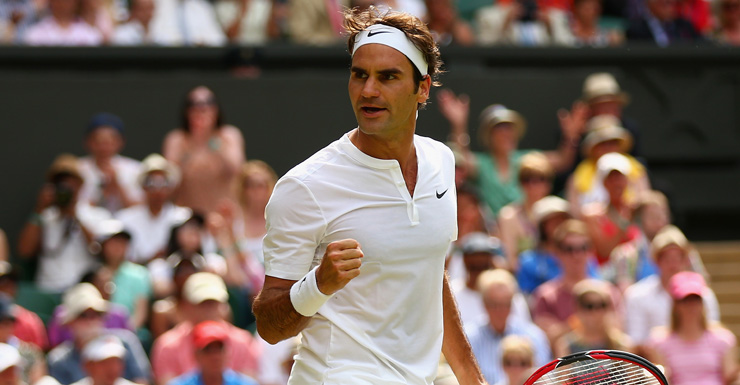 Roger Federer has admitted he loves being Wimbledon’s great entertainer after producing a candidate for shot of the tournament in his demolition of Sam Querrey.

Seven-time champion Federer added to his repertoire of magical Centre Court moments in the second set of his 6-4 6-2 6-2 second round victory.

Sprinting along the baseline, the Swiss great slipped the racket between his legs to direct the ball over the head of the stranded Querrey with an outrageous lob.

The 33-year-old’s audacious piece of skill brought gasps from the crowd and admiration from Querrey, who was so impressed he said he felt like walking around the net to ‘high-five’ his opponent.
“He’s got that aura around him. You know, today he hit that shot between the legs,” Querrey said.

“He hit some amazing shots. You want to go over and give him a high-five sometimes.”

Federer was both amused and pleased when told of the American’s reaction to his moment of magic.

“Sam’s a super laid-back, nice guy. I really like him a lot.

When we look at each other, I feel like we know when somebody hit a good shot.”

Asked whether he chose to hit the shot that way to entertain the crowd in a match he was already dominating, Federer insisted he was just reacting instinctively.

“It all happens very quickly. I can’t put it on super slow and go, All right, what’s best? ‘Cause I guess so many things shoot through your mind,” he said.

“The easiest way for me was somehow through the legs rather than coming to a complete standstill and then hitting a lob, which he would have seen where it was going to go.

“Through the legs, you’re not sure if it’s going to come short or high. I got lucky. I hit it perfect.”

Federer has breezed through his first two matches in emphatic fashion as he bids to win the tournament for a record eighth time.