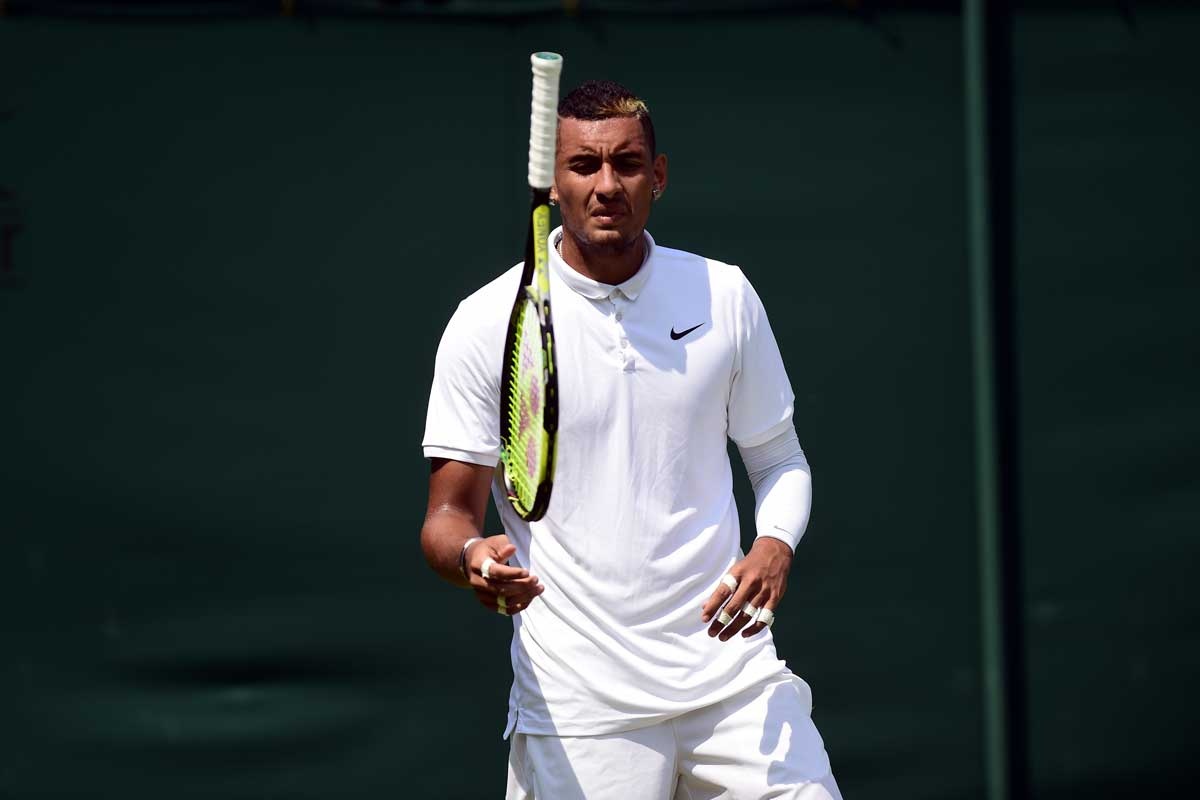 Another ugly exchange with the chair umpire has overshadowed Nick Kyrgios’s march to the third round at Wimbledon.

Kyrgios joined fellow Australian seeds Bernard Tomic and Samantha Stosur in the last 32 at the All England Club on Wednesday with a 7-6 (7-5) 6-3 6-4 victory over Argentine Juan Monaco.

The impressive straight-sets victory over the 35th-ranked Monaco laid down a marker ahead of his rematch on Friday with seventh seed Milos Raonic, the big-serving Canadian who ended Kyrgios’s magical run last year in the quarter-finals.

But instead of being celebrated, Kyrgios’s on-court conduct was once again questioned following a first-set spat with umpire Ali Nili.

Kyrgios took exception to a linesman reporting the 20-year-old for swearing and took the matter up with Nili.

But when Nili didn’t provide the explanation Kyrgios was seeking, the young firebrand began belittling the American.

Kyrgios continued his attack during his post-match press conference.

“I just thought he thought he was top dog in the chair really,” he said.

“He was telling me not to speak to him, all that stuff. Doesn’t really matter, you know.”

When asked if he was conscious of how much he was swearing, Kyrgios put his outbursts down to grand slam pressure and a headache caused by an ongoing sinus infection.

“I’m in pain and I’m playing a tennis match at Wimbledon second round. A bit of stress out there.”

Despite the histrionics, Kyrgios didn’t believe he was “causing any drama” and countryman Matt Ebden hoped the youngster’s running battles with officialdom wouldn’t hinder his progress.

On Monday, Kyrgios was forced to deny he was referring to Mohamed Lahyani when he blurted out “dirty scum … unbelievable” after another dispute with the umpire.

“It’s not so easy being super young. Bernie was in the same boat two or three years ago.

“You make a big result the pressure is on you. You have pressure from agents and sponsors to try and live it up, try and be a big dog, try and be the coolest guy in the world, try and put a persona on an image.

“It’s just fun for him. Some people like it, some people don’t. I guess you have to be a bit careful. I hope it doesn’t get in his way, put it that way.”

Tomic earlier overcame London’s extreme heat and humidity to set up blockbuster showdown on Friday with world No.1 and defending champion Novak Djokovic.

Tomic complained of dizziness as temperatures nudged 30 degrees but showed true grit to grind out a 7-6 (7-3) 6-4 7-6 (7-5) second-round win over talented young Frenchman Pierre-Hugues Herbert on Wednesday.

On another fine day for Australia, after its best start to the tournament since 1999, Stosur outclassed lowly-ranked Pole Urszula Radwanska 6-3 6-4 to reach the third for only the third time in 13 attempts.

The former US Open champion next meets Coco Vandeweghe, the big-hitting American who eliminated her from this year’s Australian Open.