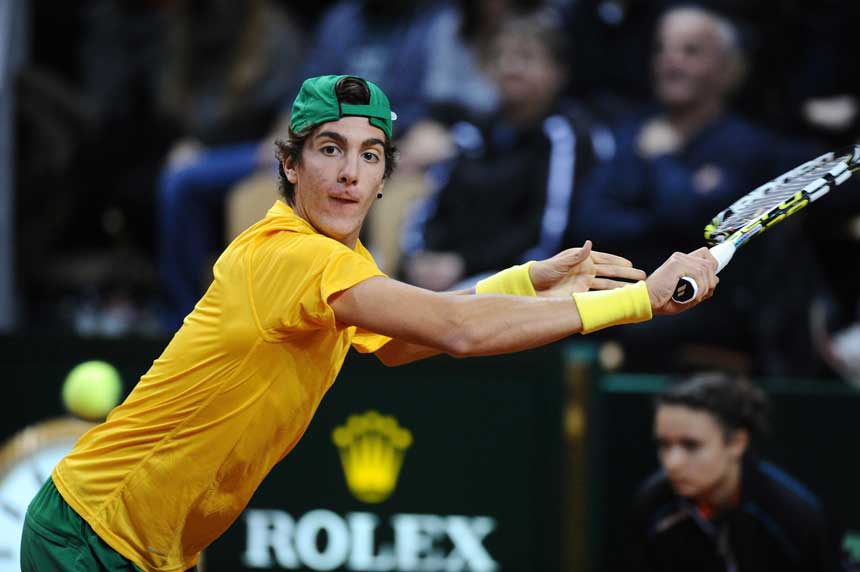 Newcombe last month awarded Kyrgios the medal named in his honour as Australia’s most outstanding performer of 2014.

But the seven-times grand slam champion and former world No.1 believes Kokkinakis is just as special.

While Kyrgios was grabbing global headlines with his giantkilling run to the Wimbledon quarter-finals, his good mate Kokkinakis was quietly making his own move up the rankings.

Standing at a towering 196cm, three centimetres taller than Kyrgios and 12 months younger, Kokkinakis claimed his maiden grand slam win at the Australian Open in January, made Rafael Nadal sweat in the second round and also earned rave reviews from his exhibition doubles partner John McEnroe.

Kokkinakis has also won over Australian Davis Cup captain Pat Rafter and now Newcombe is tipping the two-time grand slam junior runner-up to make his mark on the world stage in 2015.

“I think he’s the same as Nick, certainly with a potential to be top 20, top 10, top four or five in the world.

“In some ways, he might have a slightly better all-round game. Not quite as much explosive power as Nick.

“It might take Thanasi an extra year to get it, but I think he’ll make good inroads next year.

“I’d be very surprised if he’s not well entrenched in the top 100 by the end of next year.”

With the so-called Special Ks of Kyrgios and Kokkinakis leading the way, Newcombe has high hopes that Australia can re-establish itself as a Davis Cup force in the coming years.

“I think Lleyton (Hewitt) is going to take over (as captain) probably in 2016 and he’s going to inherit some good stuff,” said the former skipper.

“So to have Pat running (Tennis Australia’s) player development and pushing good stuff through, the signs are good.

“And both of them are on the same wave length about culture.

“You’ve got to have the culture, otherwise it ain’t going to happen – in any team sport.”