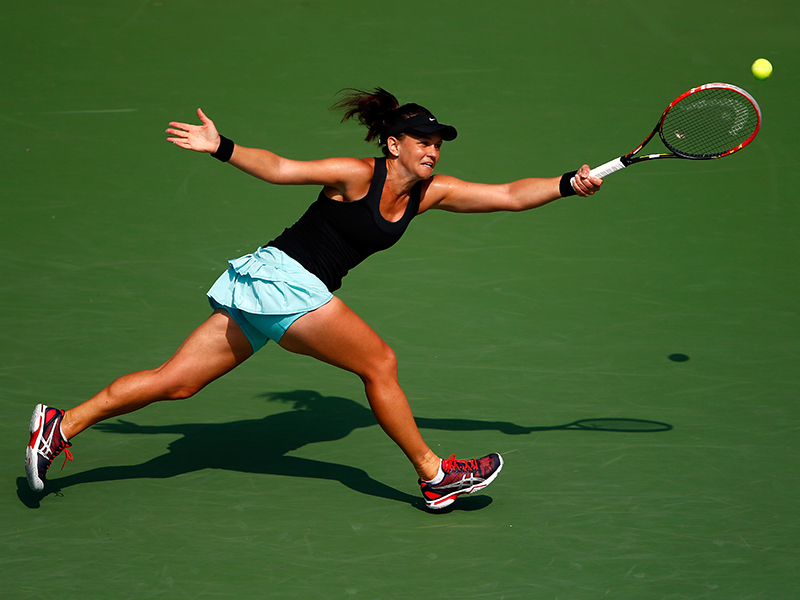 Casey Dellacqua is wondering what might have been after her bold bid to reach her maiden grand slam quarter-final came to an end at the US Open in New York.

Striving to enter uncharted territory and set up a likely blockbuster quarter-final with world No.1 and titleholder Serena Williams, Dellacqua lamented losing a fiercely contested opening set in the muggy conditions.

The West Australian twice stood within two points of taking the set with Pennetta under pressure serving at 4-5.

“That was when I felt like, `C’mon, I can get this first set.'” Dellacqua said.

“I obviously didn’t get that point. I think she freed up a little bit saving that one, swung out a little bit.

“She found her feet a bit better, her rhythm. That was probably a crucial point of the match and felt like I was finding my way, too.

“A bit disappointing not to get that.”

Dellacqua admitted playing singles at Arthur Ashe Stadium for only the second time – and first time since a night match against Maria Sharapova seven years ago – was a little intimidating.

“Sometimes you can get a little caught behind the baseline because it’s such a different visual thing for you out there, more than probably any other court in the world purely because it is so big.

“We played on it in the doubles final, but it’s different when you have a partner out there; you’re not hanging out there by yourself.

“Yeah, it did take me a little bit to probably find my shots. It is a different feel.

“I mean, that’s not the reason why I lost today. It was purely Flavia is a great player.

“She’s 11 in the world, done well here before for a reason. Today she was better on the day than me.”

In a glimpse of the torrid battle to come, Dellacqua fought off three break points in the opening game to hold after a seven-minute serving game.

Pennetta also had to save a break point to hold for 1-1 before striking first blood with a powerful backhand return down the line in the third game.

Dellacqua broke right back to make it 2-2 as the Australian’s heavy groundstrokes forced Pennetta to frame two forehands into the stands.

Pennetta claimed her second break when Dellacqua dumped a forehand into the net to fall behind 4-3, but the Aussie underdog hit back immediately once more with some impressive defence inducing another forehand shank from the Italian.

After holding firm for 5-5 and then breaking Dellacqua the very next game, Pennetta served out the hard-fought set after 50 minutes.

The Italian raced to a 4-0 lead in the second set and converted her double-break advantage after one hour and 20 minutes.

Despite the defeat, Dellacqua will depart Flushing Meadows with a career-high ranking close to the world’s top 25 – a year after dipping outside the top 200 – and on track to secure a first-ever seeding at the Australian Open in January.

“I’m obviously disappointed for that loss, but overall I’m happy with where I’m heading,” the left-hander said.

“The tennis I’ve played, the tennis that I am playing, it’s been a great tournament for me.”