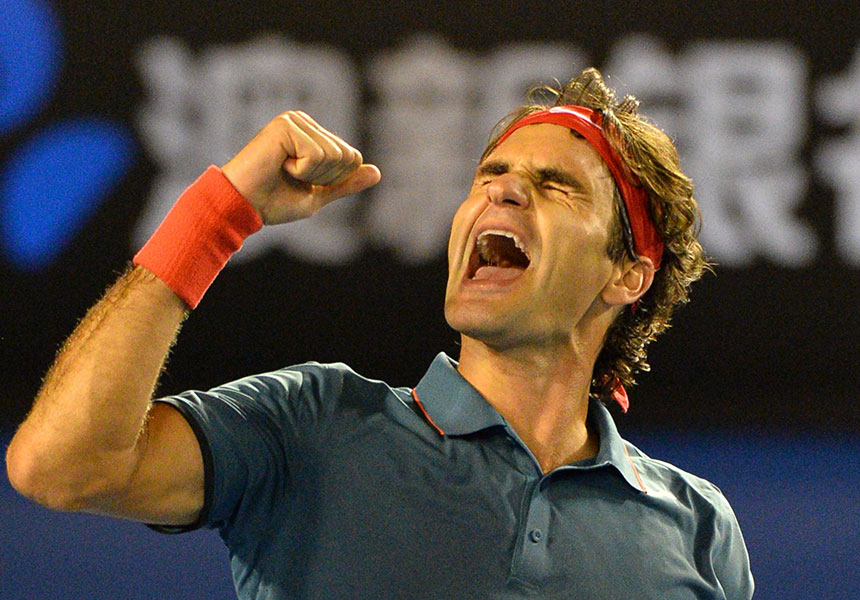 Ivan Lendl; the dour, undemonstrative, uncompromising Czech, resisting the urge to nod off. To his left, Stefan Edberg; the fresh-faced, ice-cool Swede, a sporting artist in his day. On court, Andy Murray and Roger Federer represented a study in contrasts as well. On this occasion, elegance would prevail over grunt.

Recent history pointed towards the Scot. Murray has won two of the past five Grand Slams and was a finalist in another. Federer, in the same period, made just one semi-final. The rub, of course, was Murray’s recent back surgery and the growing sense that the Federer of old was swanning around Melbourne Park.

Federer’s newfound willingness to attack the net was immediately evident in the first set, as he romped to a 6-3 win. The last thing he wanted was a baseline war of attrition and a string a quick-fire, dominant service games did the trick. A set up, Roger had the crowd and Andy had the grumps.

An errant Murray forehand gifted Federer a break in the fifth game of the second set, en route to a 6-4 win. The prevailing opinion that he had lost a yard of pace was being refuted before our eyes. His service games were invariably routs and he was running down balls much like the night he beat Murray in straight sets at the 2010 Open Final. Murray’s frustration was obvious. “STUPID!” he yelled after one particularly ugly shank. Lendl merely cocked an eyebrow.

At 4-4 and 15-15 in the third set, Federer chased down a ball that very nearly bounced twice, hitting a winner to boot. The umpire gave the nod to The Dodger and Murray promptly dropped serve. It seemed to wake him up, however, and he immediately broke back. In the ensuring tiebreak, he saved two match points and then snared four consecutive points to win 8-6. Against all the run of play, Murray suddenly had a sniff.

What he didn’t have, however, was a body that could go the distance. His back was seizing up and he winced noticeably following any point requiring significant exertion. It took 10 break points but Federer finally broke him and rounded things out with ace to win 6-3, 6-4, 6-7, 6-3. Losing no admirers, Murray hobbled off and Federer prepared for his 11th Australian Open semi-final on the trot.

Federer has one problem … and his name is Rafael Nadal. Bulgaria’s Grigor Dimitrov took it up to the champion Spaniard and had the chance to go two sets the better in a tense tiebreak. But when Nadal hunted down a drop shot and angled a one-handed backhand winner, he let out a massive “VAMOS!” and things were all square.

Dimitrov doesn’t like to be referred to as ‘Baby Fed’ these days but the parallels are there. He had his chances too, coughing up several set point chances in the third set with two identical loose forehands. You just don’t give Nadal chances like that and he quickly wrested back control, despite a festering blister on his favoured left hand needing constant attention and re-taping.

In the women’s draw, the curse of the tournament favourite continued. Victoria Azarenka and Agnieszka Radwanska couldn’t be more contrasting players. The Belarussian towers over the Pole, has won 10 of their past 11 matches (including the past 12 sets) and the past two Australian Opens. She plays a brutal, belligerent, backcourt game. Azarenka can be heard from the Belarussian hinterlands, whereas Radwanska plays by stealth.

Guile, touch, cunning and nous would win the day, however, with the Pole wowing the crowd with her range of tricks. By the end, Azarenka was a tortured soul, berating herself, copping boos from the crowd and managing just 14 points to go down 6-0 in the third. She rocked up to the press conference sporting a t-shirt that read ‘Deal With It’ and sought consolation from Red Foo. Radwanska, meanwhile, has to back up again today in her semi-final clash against Dominika Cibulkova.