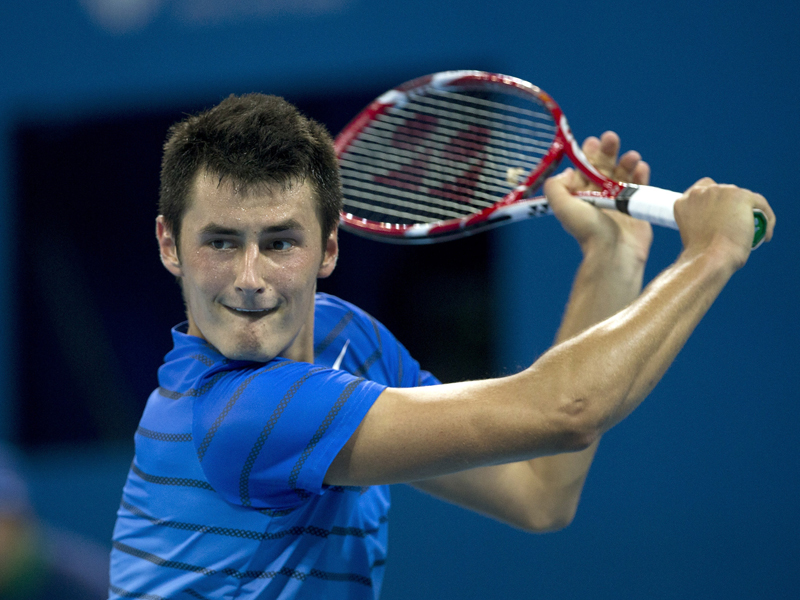 Bernard Tomic wants to ditch his party image and believes a humble approach will help him in 2014.

Bernard Tomic wants to ditch his party boy image and believes a humble approach will help him crack tennis’ top 20 in 2014.

Tomic’s previous goal of becoming a top 10 player this year seemed less far-fetched when he won the Sydney International and made it to the third round of the Australian Open in January.

But his campaign began to unravel with off-court distractions, which included his father and coach John being banned from tournaments after an incident that left Tomic’s former hitting partner Thomas Drouet with a broken nose.

Tomic’s second half to the year was blighted by a series of first-round bombouts, and the 21-year-old later enhanced his party boy reputation after being photographed getting a lap dance during Schoolies’ week on the Gold Coast.

But the world No.51 wants to be known as a great tennis player rather than a great party goer.

“I’ve been young, and maybe I lost my head there a little bit,” Tomic said on Friday.

Tomic will begin his Australian Open preparations at Perth’s Hopman Cup, where he will team with Sam Stosur in a bid to break Australia’s 15-year title drought.

Their first assignment is against Canada on Saturday, when Tomic will take on world No.11 Milos Raonic.

Tomic has produced some of his finest tennis on Australian soil, including a win over former world No.1 Novak Djokovic in Perth last summer.

But the 196cm right-hander has struggled to maintain his health and form overseas.

“Once the tour starts, I don’t take care of my body as well as I should,” Tomic said.

“I play a lot of tournaments. I get sick a lot of the time. So I’m always up and down.

“It’s difficult to control that.

“In Australia, I seem to rest and prepare very good. And I play good tennis in the summer.

Seventeen-times grand slam champion Roger Federer says Tomic needs to make a move into the top 25 next year, as well as simplify his approach to tennis.

Tomic agreed with the Swiss great, and said his new coach, Croatian Velimir Zovko, had helped him with his discipline.

Zovko will work with Tomic’s dad John, who is banned from attending tennis tournaments until May.