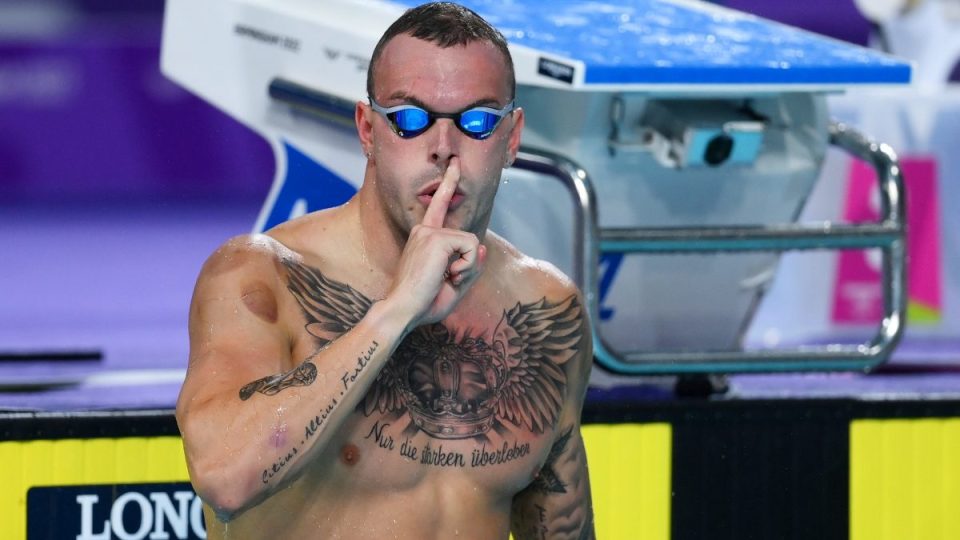 Another day of the Commonwealth Games, another Gold for Emma McKeon.

The Australian continued her run by touching the wall 0.15 seconds ahead of Holly Barratt in the 50-metre butterfly.

After he became the new Games 100-metre freestyle champion, Chalmers held a finger up to his mouth to issue a silence signal.

It was a not-so-subtle gesture to critics to shut up.

“That probably means more than giving a fist pump or a tensing of the muscles,” Chalmers said.

“For me, I hope that sends a powerful message.”

A day after saying he felt like flying home when overwhelmed by media scrutiny, Chalmers’ victory was brute power, leading from start to finish.

“It’s a bittersweet feeling for me,” Chalmers said, explaining he had been on an “emotional rollercoaster” prior to the race.

“Instead of enjoying the moment, it’s almost a big sense of relief to be honest with you.

“Even speaking to my coach before the race, I almost started crying and I’m not an emotional person.”

Chalmers had raged at media reporting about his relationships with his ex, McKeon, and her new partner and fellow swimmer Cody Simpson.

Despite talking of leaving the competion, the South Australian stayed and in Monday night’s final and was an unstoppable force, winning 47.51 seconds.

McKeown, despite a shoulder niggle, won by a whopping 2.21 seconds – an eternity in the swimming contest.

Read on to find out about Australia’s other golden athletes.

Ellen Ryan has made Australian lawn bowls history, and denied Guernsey a slice of its own, by claiming Commonwealth Games gold in the women’s singles.

Ryan’s see-sawing 21-17 victory was Australia’s first in the blue riband event, as she rallied from 6-0, 10-2 and then 16-12 down to end Lucy Beere’s quest to become her country’s first Games gold medallist since 1990.

It was Australia’s first lawn bowls gold at a Commonwealth Games held in Britain, while Beere’s silver was the 65,000-strong Channel Islands nation’s first medal of any kind since 1994.

The 25-year-old Australian burst into tears when mobbed by her Jackaroos teammates, including mentor and two-time world singles champion Karen Murphy.

But Ryan stands alone now, as not even Murphy – dubbed Queen of the Green thanks to two decades on top of the sport – was able to clinch the singles crown in five Games appearances.

“I’ve got pairs tomorrow with my best friend Kristina (Krstic) and that was the one I was always dreaming about, winning pairs gold,” Ryan told AAP.

“So I won’t believe it for a while, but I’ll have to have a couple of soda waters tonight.

“And having Karen here, you can’t get much better than that.

“It’d be great to get some younger ones involved (in the sport). Hopefully I can show that it is a sport for young people.”

Beaten 21-11 in the group stages by the 40-year-old Beere, Ryan was under the pump early.

But the 25-year-old had toughed it out to make the final and was happy to grit her teeth again, rallying despite regular brilliance from the favourite.

Earlier Australia’s men’s triples team fell agonisingly short of one of the great lawn bowls comebacks, denied gold in a 14-12 loss to England.

Easton snatched victory from the jaws of defeat against Canada’s Kelly Deguchi in the women’s 52 kilogram in Coventry, winning via Waza-ari in the golden score period.

The 26-year-old had two Shidos (penalties) to Deguchi’s one before the golden score period and appeared on the ropes before pulling off an Uchi-mata to seal victory.

Easton threw Deguchi over her thigh and onto her back then pounded her fist on the ground and threw her arms in the air in euphoric disbelief.

Katz was among the pre-tournament favourites but a semi-final loss to England’s Ashley McKenzie, the eventual gold medallist, relegated him to a bronze-medal fight.

But Katz didn’t show any signs of disappointment as he quickly seized control of his match with Zulu, getting on the attack immediately and meeting little resistance.

The 24-year-old claimed bronze in three minutes and 48 seconds by Ippon, sealing the deal with an excellent seoinage.

Immediately after Easton’s win, Nathan Katz made it three medals for Australia with a hard-fought victory over Jasleen Singh Saini in the men’s 66 kilogram event.

Like Easton, Katz appeared up against it as Saini went on the attack, and received two early Shidos.

Then, in his first real attack of the fight, six seconds before golden score, Katz got the inside grip on Saini then flung him squarely onto his back before punching the air in delight.

Katz, 27, made the bronze-medal match via victory over Wales’ Gregg Varey in the repechage, after losing his quarter-final against Cyprus’ Georgios Balarjishvili.

The Katz siblings are the sons of Kerrye Katz, who competed for Australia when women’s judo was a demonstration sport at the 1988 Seoul Olympics.

Another Gold for Godwin

Australia’s shining light in artistic gymnastics, Georgia Godwin hopes her golden form at the Commonwealth Games can help put the scandal-hit sport in a better light and drive it forward.

Godwin has claimed four medals, two gold and two silver, in 48 hours in Birmingham and has almost single-handedly put the gymnastics team into the spotlight.

On Monday, Godwin claimed gold in the vault ahead of Canada’s Laurie Denommee on a tiebreak, then silver behind England star Georgia-Mae Fenton in the uneven bars.

Australia’s captain earlier broke through for all-around gold on Sunday and claimed team silver on Saturday.

Godwin’s success is a welcome boost for Australian gymnastics.

The sport was left reeling in May 2021 by an independent review conducted by the Australian Human Rights Commission which found the sport’s culture and ‘winning-at-all-costs’ focus enabled physical, sexual and emotional abuse.

Godwin said she had deliberately blocked out the conversation, as it didn’t help her mental health when she was attempting to focus on major competitions

But the 24-year-old said she tried to play the “mother figure” in a young team attempting to put gymnastics in “the best light we can”.

“I do my best to try and show that gymnastics is a safe sport and that everyone should feel safe doing gymnastics,” she said.

“And we’re heading in the right direction, so that is really exciting to see.”

A three-time medallist on the Gold Coast, Godwin has now drawn level with Lauren Mitchell on seven Games medals, albeit with two less golds, and can claim another in Tuesday’s beam.

“I just come to these competitions and I just have fun and I do my best and the medals are a huge bonus,” she said.

“I’ve learned that putting that expectation on me doesn’t help.”

“I just went out there and put 110 per cent of what I had left into that first vault and it just happened to be enough,” she said.

In the uneven bars, Godwin landed a 13.500 to temporarily lead but was overtaken by Fenton, who produced 13.900 to defend her title.

Meanwhile teenager Jesse Moore was left to rue a fall late in his pommel horse routine that all but cost him a silver medal, finishing fifth.

A “pretty devastated” Moore said he “just ran out of gas at the end”.

Moore, 19, withdrew from the rings event due to the shoulder injury he aggravated in Sunday’s all-around final, but is aiming to compete in Tuesday’s high bar final.

Glaetzer may retire on top

Matt Glaetzer admits he may have had his final Commonwealth Games race – but believes it couldn’t have ended with a more glorious or unexpected gold.

Australia’s top track sprinter won his record-equalling fifth title at the Games in Monday’s 1km time trial – and had to do it the hard way.

Less than 48 hours after his terrible crash at the London Olympic velodrome which left him needing his elbow cut open to remove splinters, the Adelaide flyer was faced with the enormous disadvantage of having to ride a bike with different handlebars because of safety reasons.

Even he felt he couldn’t win while having to employ a less aerodynamic position with sprint handlebars instead of pursuit aero-bars, yet produced one of his great rides to successfully defend his four-lap title.

Last to go, Glaetzer clocked 59.505 seconds, with Australian silver medallist Tom Cornish left with head in hands after the three-time Australian champion had earlier clocked a potential winning time of 1:00.036.

“It’s going to be a very big stretch to make another Commonwealth Games, so that was more than likely my last Games ride – and to take away a gold for Australia is special,” said Glaetzer, after matching Anna Meares’ record Australian cycling tally of five Commonwealth golds.

“It’s becoming a habit for me at the Commonwealth Games, having to overcome adversity. It is really special.

“I’d rather not have the lows to bounce back from, but it’s testament to the challenges we all face that there’s always a new day and we can always try again,” added the man who’s overcome thyroid cancer and serious injuries to keep soldiering on the last two years.

Glaetzer had been cruelly denied a medal in the sprint on Sunday after being relegated for unfair riding following victory in the bronze-medal race.

He revealed all three Australians had only been told four days before flying out to the Games they’d need to use sprint handlebars because of fears their power output might snap the aero-bar.

At last year’s Tokyo Olympics, AusCycling had to apologise for a catastrophic equipment failure when Alex Porter ended up with facial injuries after crashing head-first into the track in team pursuit qualifying after the handlebar snapped.

The governing body had said in a statement earlier on Monday their riders would have to use drop handlebars which would result in “marginally slower times” but were a safety necessity.

Yet Glaetzer made light of it.

“It cost us a second out there – I knew I had to ride a 59 to win it and that hasn’t been done on sprint bars by myself, so it was new territory and I’m just super happy,” he said.

“It was pretty last minute when we found out. We couldn’t control it. But we’d rather be safe, and not snap anything or lacerate our arm with something going wrong, so we took it in our stride.”

On the final day of the track program, Glaetzer’s was the eighth gold won by the Australians and their 13th in all – the same tally as New Zealand – as they maintained their record of topping the track medal table for an eighth consecutive Games.