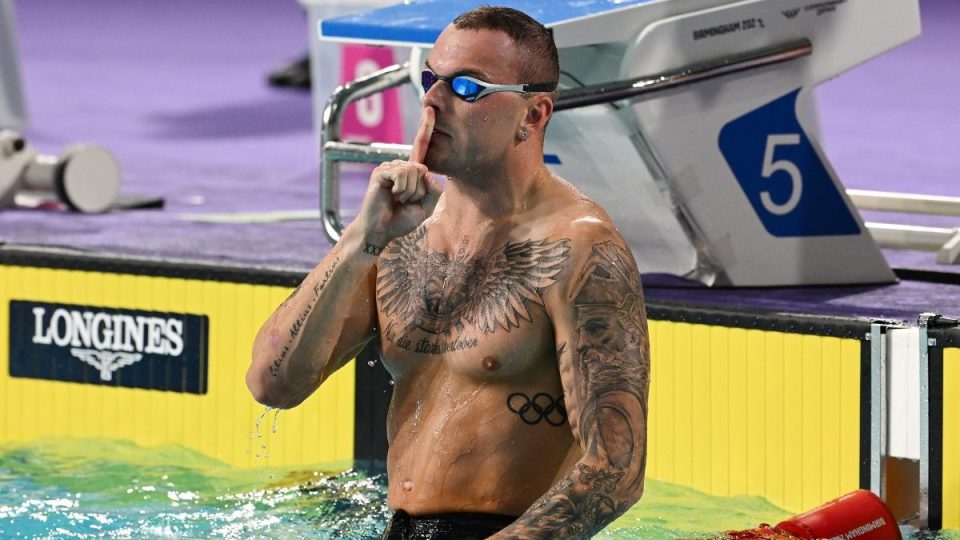 Brett Chalmers has accused Swimming Australia of failing to protect his Commonwealth Games champion son Kyle from overwhelming media scrutiny which led him to consider quitting the sport.

After winning the 100m freestyle gold medal in Birmingham on Monday night Chalmers climbed on the lane rope and signalled silence, in a message to media about his ordeal.

After the race he said his last two days had “been hell”.

“It has been an emotional rollercoaster.”

The South Australian ace had been in the headlines after reports of a rift in the Dolphins camp, with speculation about his relationships with ex-girlfriend Emma McKeon and her new partner, fellow teammate and former popstar Cody Simpson.

Chalmers said the mental anguish had made him consider leaving Birmingham and even ending his sporting career rather than swimming on for the Paris Olympics.

A tearful Brett Chalmers, who was at their Adelaide home, said Swimming Australia should have done more to protect his son from allegations of a “love triangle”.

“I look at it and think if it was in a workplace and you’re being asked the same question over and over again it’s a form of bullying and harassment and it’s not condoned and it’s not accepted,” Chalmers senior told told Mix 102.3 on Tuesday.

“You’d be pulled into the manager’s office and if you don’t stop you’d probably lose your job, whereas these people get away with it, they destroy people’s lives and livelihoods, it’s pretty hard.

“I just don’t get it, why? I guess sporting organisations and sporting clubs allow this to happen.

“They (Swimming Australia) failed hugely, and they’ve allowed the media to dictate the questions and kept going on about it – they’ve failed to look after their athletes.”

Chalmers said it had been tough to watch from afar but felt his son was being supported by his coach and his teammates.

“Kyle’s a guy that holds it pretty close to his chest, there’s no doubt it’s been tough. It’s been tough on myself being 15,000km away, I can’t imagine what it’s been like for him not to have family and friends or close relatives around him,” he said.

“He’s got some good teammates and a really good coach so I’m sure they rallied around him and gave him the love he needed.”