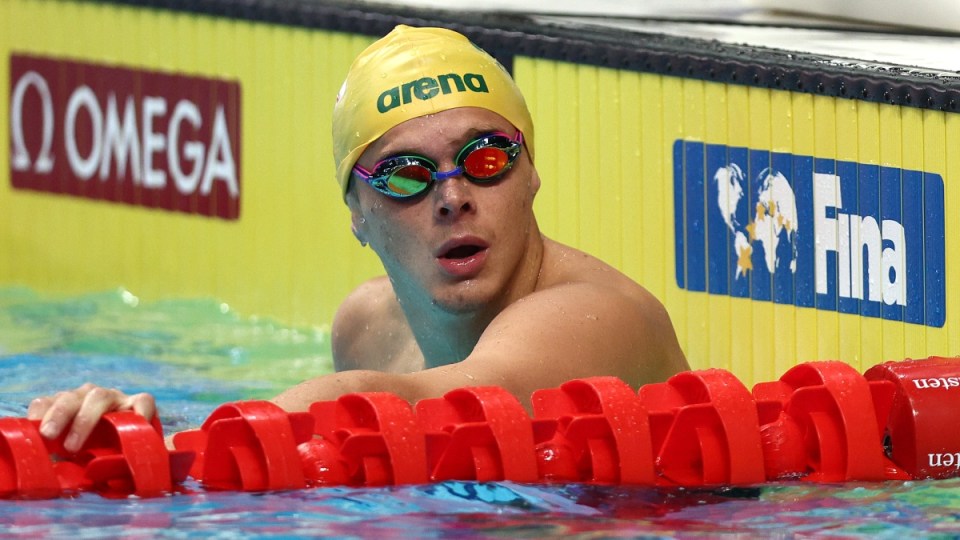 Australian backstroke champion Isaac Cooper has been banished from the looming Commonwealth Games for misusing medication.

Cooper has been sent home from the Australian swim team’s pre-Games camp in Chartres, France.

“Cooper has been sent home from the Dolphins training camp following some wellbeing challenges, including the use of medication,” Swimming Australia said in a statement on Wednesday.

“He has acknowledged his mistakes and accepted the consequences and Swimming Australia will continue to support him as he addresses these challenges.”

Cooper has departed Chartres, where he had been for the past week with the rest of the swim team ahead of arriving in Birmingham next week.

A Swimming Australia spokesman said the sedative Stilnox was “categorically” not the misused substance.

Before the 2012 London Olympics, six Australian swimmers –- Eamon Sullivan, Matt Targett, James Magnussen, James Roberts, Tommaso D’Orsogna and Cameron McEvoy – were sanctioned over the use of Stilnox at a bonding session.

All but Roberts admitted abusing Stilnox, a sleeping medication that had been banned by the Australian Olympic Committee.

The six swimmers were fined and given deferred suspensions by SA.

Cooper had been favoured to win gold medals in the 50-metre and 100-metre backstroke events at the Commonwealth Games in Birmingham starting on July 28.

The 18-year-old is the Commonwealth’s top-ranked swimmer in both backstroke events and was also entered in the 50-metre butterfly and 50-metre freestyle.

“The welfare of our athletes remains our absolute priority,” SA’s statement said.

“Swimming Australia is vigilant in educating athletes of their obligations under the National Integrity Framework and will continue to provide all necessary support to ensure they uphold the highest standards and behaviours when representing Australia.”

At Australia’s selection trials in May, the Bundaberg-born swimmer set a national record in the 500-metre backstroke.

Last month, Cooper made the 50-metre backstroke final at the world championships in Budapest, finishing eighth.

He placed 12th in the 100-metre backstroke at the worlds and won a silver medal as a heat swimmer in Australia’s 4×100 mixed relay team.

Disken, a four-time Paralympic medallist, is the reigning Commonwealth champion in the 100-metre freestyle S9 and 100-metre breaststroke SB7 events.