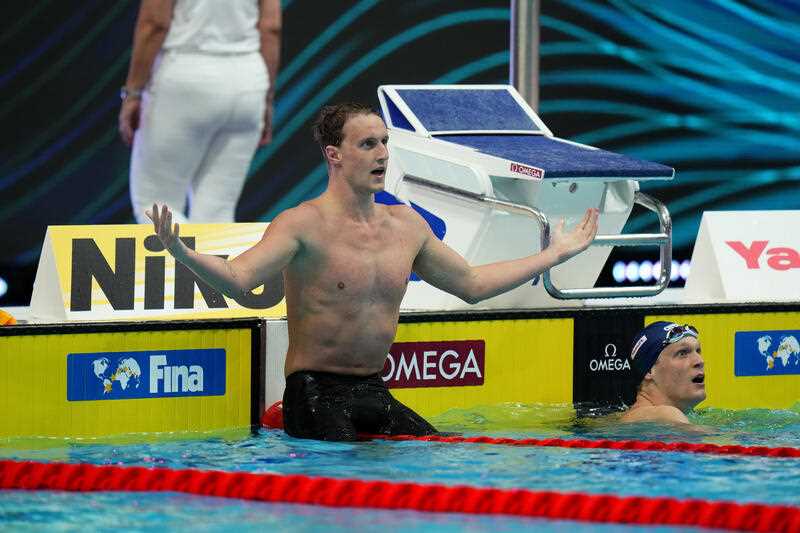 Winnington set the stage for a golden night in Budapest. Photo: AAP

Australia’s swimmers are leaving the rest of the world in their wake, making a near perfect start to the world swimming championships

The triumphs began with Elijah Winnington powering to his first global gold while the all-conquering 4x100m relay women chalked up another win.

Winnington earned redemption after his Olympic disappointment, speeding to an emphatic victory in the 400m freestyle, the first final of the entire week-long programme in Budapest, on Saturday.

Inspired by his lead, the sprint freestylers Mollie O’Callaghan, Madi Wilson, Meg Harris and Shayna Jack maintained Australia’s recent dominance in their event, winning the last event of the day with a comfortable victory in 3:30.95.

To complete a superb opening day for the Dolphins, Kyle Chalmers put in a searing anchor leg in the men’s 4x100m, enabling his teammates William Yang, Matthew Temple and Jack Cartwright to snatch what had looked the most unlikely silver behind a dominant US quartet.

The 22-year-old Gold Coast freestyler Winnington kicked it all off after the opening ceremony, swimming the race of his life and even flirting with the world record for much of his 400m final.

He eventually had to settle for a new personal best of 3 minutes 41.22 seconds as he demolished the field at the Duna Arena in the Hungarian capital and became the fifth fastest in history.

Only Ian Thorpe, among Australians, has gone quicker than his mark, which was the fastest in the world this year.

“It’s incredible. I was really relaxed, I’m just trying to enjoy this experience and that definitely helps,” the ecstatic Winnington said.

“In the last call room, I’ve heard the noise, the MC’s voice and it was a total boost for me.

“I haven’t had this feeling for a long time.”

“I was in a world-class field so I knew we were doing something pretty good, but with a hundred to go, I still felt really good and with 75 to go, I just built the last 50 out of it all.”

2016 Olympic champ Mack Horton had just missed out on making the final after the morning prelims but Winnington grabbed the baton, ending up over a second-and-a-half clear of German Lukas Martens (3:42.85), who’d started as the fastest in the field on 2022 form.

Winnington led through the first half of the race before Martens began to take control over the next two lengths, which only prompted a blistering finish from the Aussie.

Turning into the last length just behind, Winnington powered down the stretch in just 26.5 seconds while the German faded badly.

It marked a form of redemption for Winnington, who’s suffered from nerves before and who’d been left crestfallen in 2021 after going into the Olympics with high hopes but finishing only seventh in the final.

In the women’s 400 freestyle, Australian Lani Pallister just missed out on a medal in fourth as Katie Ledecky reclaimed her crown but failed to grab back her world record off Ariarne Titmus.

In the absence of Australian Titmus, who pipped Ledecky to the title in 2019 and took her world record in 3:56.40 last month, the American legend clocked 3:58.15 for her fourth world 400m free title.