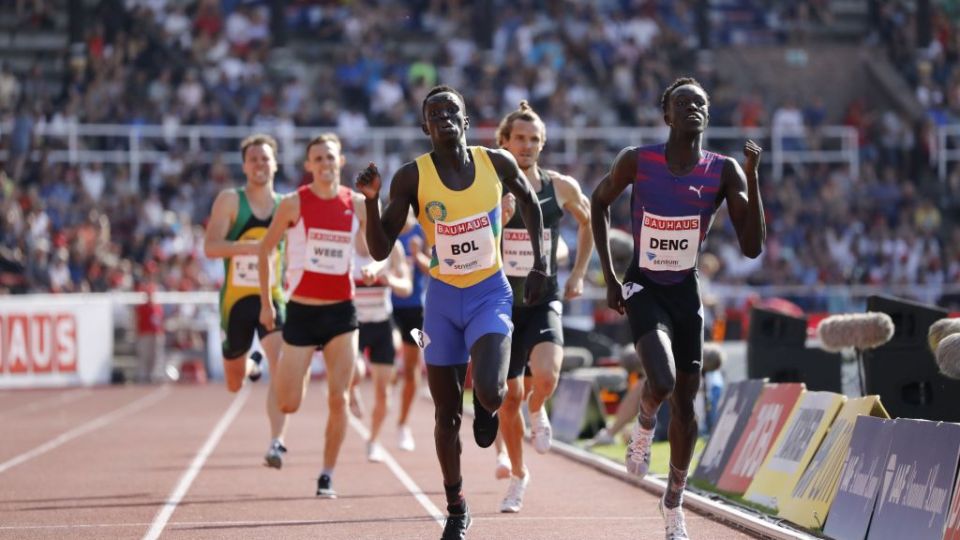 Joseph Deng is many things. A Queenslander. A lover of video games. A track star of boundless potential.

Australia’s 800m record holder, in fact, after breaking a mark that has stood for a few months shy of 50 years, at last week’s Diamond League meet in Monaco.

For any other athlete, that final fact alone would be the sole focus of attention. But he is also an African-Australian. Born in a Kenyan refugee camp to Sudanese parents.

So, the day after sensationalist headlines about “African crime gangs” in Melbourne were further fuelled by negative comments about African immigration from former prime minister Tony Abbott, Deng is inevitably drawn into that controversy, manufactured or otherwise.

He is measured and articulate on that.

He says he is focused on, “being able to have younger guys look up to you and hoping they follow in our footsteps … and achieve good things”.

Deng is doing the rounds of the media just hours off a plane after returning from Europe.

He is accompanied by teammate and fellow former South Sudanese refugee Peter Bol, who posted a personal best in Monaco and is himself a whisker from the record.

The young men accept they will be bearing more than the usual share of pressure assigned to Australian sportspeople.

Bol doesn’t mention Mr Abbott by name but says of his comments: “It is what it is. But at the same time, I think we are proud to be representing Australia and we were once immigrants.

Friends off the track, rivals on it

The pair offer accommodating smiles as they face the early-morning cameras.

They are training mates, housemates and friends; child arrivals to Australia now dodging television cables and touted as the spearheads of their adopted country’s middle-distance running renaissance.

“We are always pushing each other in training and we have been training with each other since March last year,” Deng says.

“We’re competitive at home, playing FIFA PlayStation, basketball, whatever it is, so when it comes to track its competitive, but it’s relaxed at the same time.”

Deng came to Australia at 6, Bol at 10. But both shrug off any talk of the difficulties involved, crediting their strong supportive families. Their social media accounts have affirmations of community pride without being provocatively political.

They want to simply remain focused on “running fast”.

“It’s an awesome feeling,” Deng says of his historic achievement.

“We have been working towards it for a while now, that was one of our goals and being able to get it, that’s just massive.”

His coach, Justin Rinaldi, is cautiously ambitious for his charge.

“He has just turned 20. If you look statistically, a 20-year-old running [in the region of] 1 minute 44 should make an Olympic final,” Rinaldi says.

‘Start of something amazing’

It was only a few days ago many Australians discovered they had a new, world-class rising track star.

Now, they find they have two.

“I thought they were both equally capable of getting that record”, Rinaldi says.

“You think about it, we have got two guys running 1 minute 44, we have got [Commonwealth Games bronze medallist] Luke Mathews and then we’ve got some other athletes just below that.

“So hopefully this is just the start of something amazing.”

Rinaldi points to a sliding-door moment for Deng, in March at the Commonwealth Games qualifiers.

He failed to make the A-final, and, despondent, didn’t want to run the B-final, as it wouldn’t bring medals.

But in a lesson in pure doggedness, he decided to back up and show what he was capable of, running a blistering time. That led to his somewhat controversial Games selection, now more than justified after he made the Games final.

Rinaldi has no doubt that if he hadn’t decided to dig in and run the B-final, extending his season past the Games, he wouldn’t have progressed to be the newly minted 800m record holder.

For a few weeks before the Diamond League meet, Rinaldi was sensing his athletes were closing in on the record. They were running fast in four or five of their leadup races and looking dangerously relaxed.

Rinaldi put his job on hold and jumped on a plane with his wife to Monaco.

He didn’t want to miss the moment, as he almost did four years ago when another of his athletes, Alex Rowe, equalled the same record, also in Monaco.

He hunted the record himself in his previous life as a national 800m champion.

Watching Deng blister along through the final stages, Rinaldi recalls “sheer excitement”, running through the tunnels to celebrate in the call room.

“As an athlete, I am jealous because I wish that was me,” he says.

“As a coach, I’m really proud because I think that’s a bit of a monkey we have had on our back for the past 50 years.

“We definitely had a pact this year that we didn’t want that record to see its 50th birthday. We had until October this year. And, thank goodness, it didn’t make its birthday.”

Deng and Bol are not the only Sudanese-Australian athletes set to play a key role in Australia’s sporting future.

AFL’s pursuit of this athletic bounty is almost old news, with Swans star Aliir Aliir — freshly signed to a new extended contract at the club — leading a slew of rising stars, pioneered by Majak Daw, of the North Melbourne Kangaroos.

Soccer is making a play, with the promising teenager Bul Juach impressing in Canberra. Basketball is an obvious good fit, and Boomer and NBA star Thon Maker will inspire a generation.

Already three of the 24 positions in the program are held by Sudanese-Australian players. Akdeniz expects that number to rise.

For now, the two young men occupying athletics’ spotlight are proof positive of what immigrants can offer to their adopted country when given the opportunity.

But along with other Sudanese-Australians, they’re forced to perform off the sporting field as well as on it.

The evidence so far with Deng and Bol is that they’re more than capable of both.

The Sudanese-Australian athletes racing to make the whole country proud