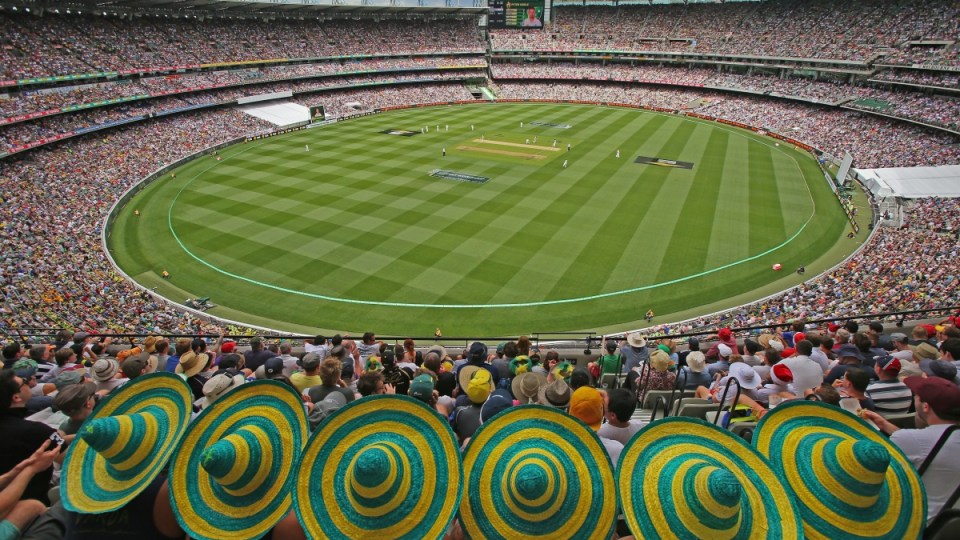 Seven is the new free-to-air home of cricket in Australia. Photo: Getty
analysis

It has never been harder for free-to-air television networks to make a dollar.

The competition from pay television and subscription services is rife and comes at a time where audiences across the board are dropping and advertising revenue has plummeted.

But despite this, networks continue to splurge on live sport despite repeated financial warnings.

Some of those warnings come from people involved in the industry themselves.

Tim Worner, chief executive of Seven West Media, which owns the Seven Network, claimed last year that sports rights had “reached a tipping point” and “price rises are not sustainable”.

Worner was, of course, instrumental in Seven’s new deal with Cricket Australia and Foxtel, unveiled earlier this month.

The networks will combine to show the summer of cricket over a six-year period for $A1.2 billion.

The purchase came after financial analysts UBS urged the Nine Network to axe its cricket coverage because the network was haemorrhaging money on it each summer.

Cricket’s mega-rich deal almost looks cheap compared to the $A418 million each year the AFL receives for its rights, while the NRL is not far behind, bringing in $A360 million on an annual basis.

Given the dire predictions of television’s demise, the growing expenditure on live sport can appear puzzling.

But there is a reason free-to-air networks prioritise live sport ahead of all other content. 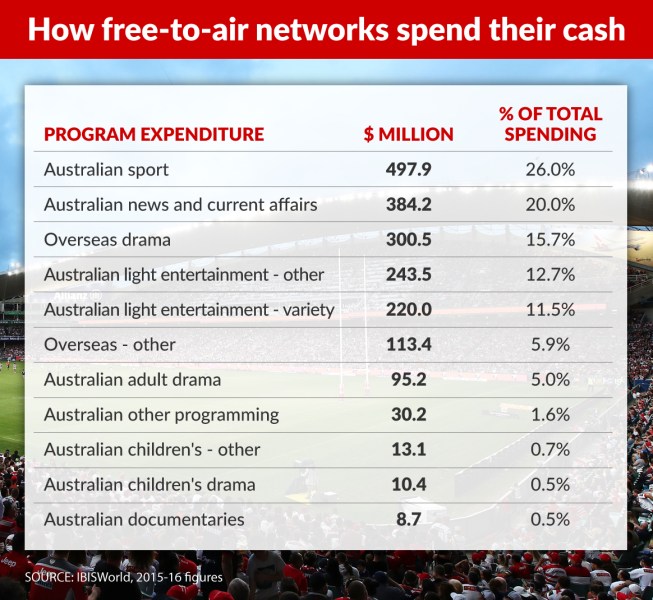 And that is because sport is a safe bet.

In a world of rapidly changing consumer tastes and habits from one year to the next, sport offers network executives the long-term certainty they crave.

As Worner stated when discussing Seven’s new deal: “We don’t know what My Kitchen Rules or other shows will rate.

“But I can tell you with some certainty what the Perth Scorchers and the Adelaide Strikers [in cricket’s Big Bash League] will rate in five years time. You get certainty with sport.”

At a time where television audiences are fragmenting, this type of certainty is worth its weight in gold.

Over the past four years, average television audiences in metro areas have declined by about 16 per cent.

Some viewers have abandoned television for online streaming services, while others are simply watching programs in non-traditional ways via a range of network apps on mobile devices.

Sport helps overcome this problem, too.

It is always best consumed live and as such, networks are guaranteed big audiences for big sporting events.

For advertisers, who are re-assessing their relationship with television, this is crucial.

Revenue for free-to-air television broadcasting, which usually comes in the form of advertising sales, has dropped from $A7.3 billion in 2005-06 to a projected $A4.7 billion in 2017-18.

The big companies know that live sport will always rate, though. 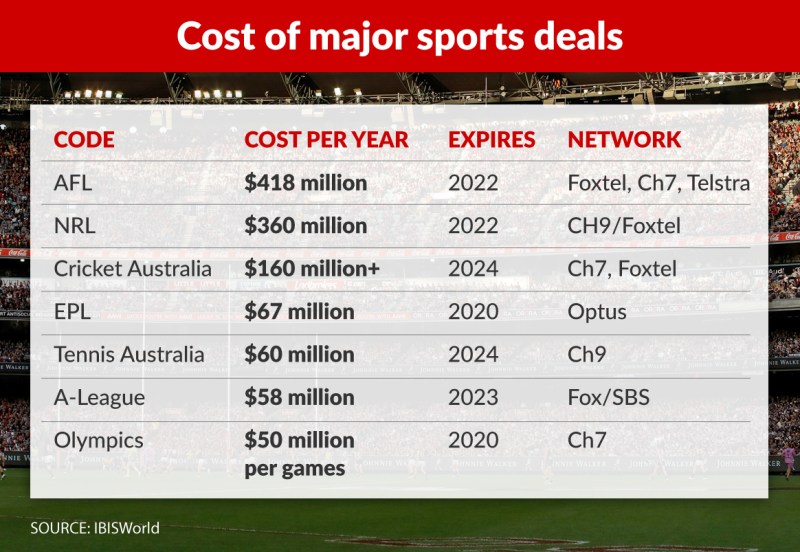 The three most watched television programs in Australia in 2017 were all sport events, with the AFL grand final topping the list with 3.69 million viewers.

The State of Origin decider (3.65 million) and the Australian Open men’s final (3.62 million) were not far behind.

For the networks, who can charge in the vicinity of $A130,000 to $A175,000 for a 30-second advertisement during sport’s biggest occasions, live sport is key.

There’s also the cross-promotion of other programs that sport offers, and the flow-on effect coverage can have on other programs.

That is the reason the AFL schedules a Sunday afternoon game on 3.20pm (AEST).

The timing is designed to ensure the game finishes as close to 6pm as possible so that the footy audience will stay tuned to Seven for their nightly news, a tactic that generally works.

Seven’s news, for example, is regularly in the top five most-watched programs every Sunday night during the footy season.

So, although our television networks are not the powerhouse organisations they once were, the picture would be considerably bleaker without sport.

But perhaps the truth is that networks can’t afford not to invest in them.