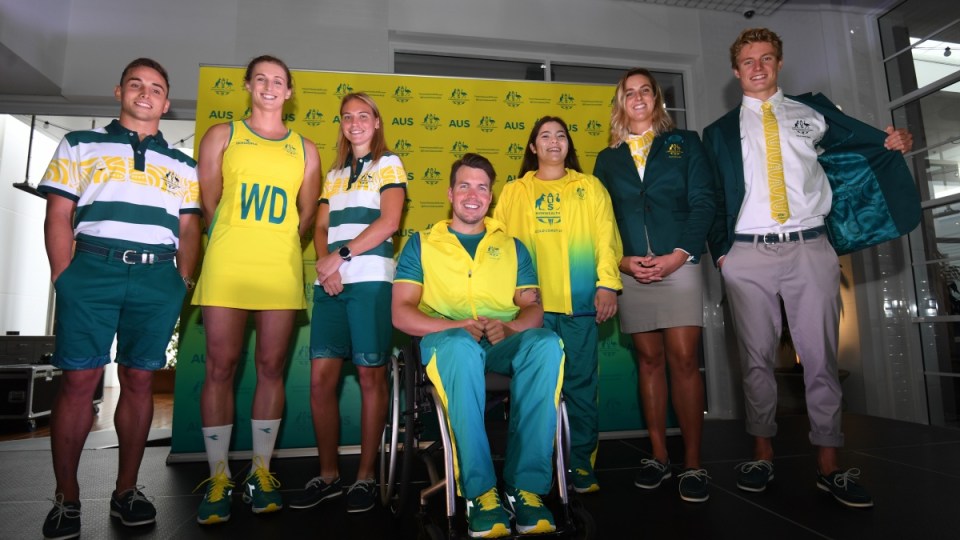 “I wouldn’t mind one for the 40th anniversary of the Mardi Gras.”

You may be thinking the gentleman responsible for this comment – one of Australia’s leading fashion commentators – is referring to a sparkle rainbow tutu with fishnet stockings or a sexy burlesque number.

Damien Woolnough, a former deputy editor of Elle Australia, is in fact referring to Australia’s team uniform for the upcoming Commonwealth Games on the Gold Coast, which was unveiled on Friday.

For some reason, the ‘get up’ our sporting heroes don when they go for gold always makes headlines and polarises opinion.

It may not be as contentious as gun control, climate change or health care, but Aussies love to have their say on the matter.

It’s as certain as death and taxes – and it’s odd.

At the end of the day, we’re a nation that loves a winner. If an Aussie won gold whilst wearing a bed sheet, we’d organise a ticker tape parade and hand them the keys to the city.

Matthew Mitcham, who represented Australia in diving at the Commonwealth Games in 2006, 2010 and 2014, was good enough to win gold in the synchro 10m platform in Glasgow four years ago.

The 29-year-old told The New Daily this year’s competition wear appears similar to what he wore.

“It looks pretty standard, pretty similar to what we would usually wear,” he said.

Like Woolnough, respected fashion writer and New Daily columnist Kirstie Clements, who spent 25 years at Vogue magazine, 13 of those as editor, believes the uniform fails to flatter.

“I think green and gold are really difficult colours to work with. If the green and the gold isn’t interpreted right, it can look a bit lurid, and I think that’s happened on that sportswear – that tracksuit is really, really lurid, it’s quite ’80s-looking. They may have done that on purpose, but for me it looks a bit cheap.”

And Woolnough had some further gold when chatting to The New Daily.

“The ’80s are back! I keep expecting to see Matilda winking in the background,” he said, citing the 1982 Commonwealth Games mascot. “The ’80s were a good time for Australian sport so hopefully the tracksuits will bring the team luck.

“As kids go back to school around the country our athletes look ready to join them, although they might be trying to get away with the skirts and pants they grew out of last year.

“The look is definitely more conservative Christian college than Yeezy. The boat shoes have retro appeal and will make every man over sixty north of Coolangatta feel bang on trend.”

Italian manufacturer Diadora produced the competition wear for Australia’s athletes, while local brand RM Williams came up with the uniforms for the opening and closing ceremonies.

It may not have been a ‘perfect 10’, but the clothing did receive a semi-positive review from one industry expert, celebrity stylist Suzy Eskander.

“I think this year is better than other years,” Eskander told The New Daily.

“The fluoro (yellow) and teal is a modern take on the green and gold; I think that looks good. The fluoro yellow will really stand out.

“I like the formal part of the uniform; I like the cuffed pants on the guys, and it’s appropriate for the weather.”

Eskander did, however, throw a right hook towards those who awarded the production of the team kit to Diadora.

“It’s not an Australian brand, and that’s not cool,” Eskander remarked.

“In a time in fashion where Australian brands are struggling… we’re supporting Australian athletes, the Games are in Australia… I think it should have been given to an Australian fashion company.”

The Commonwealth Games run from April 4-15.