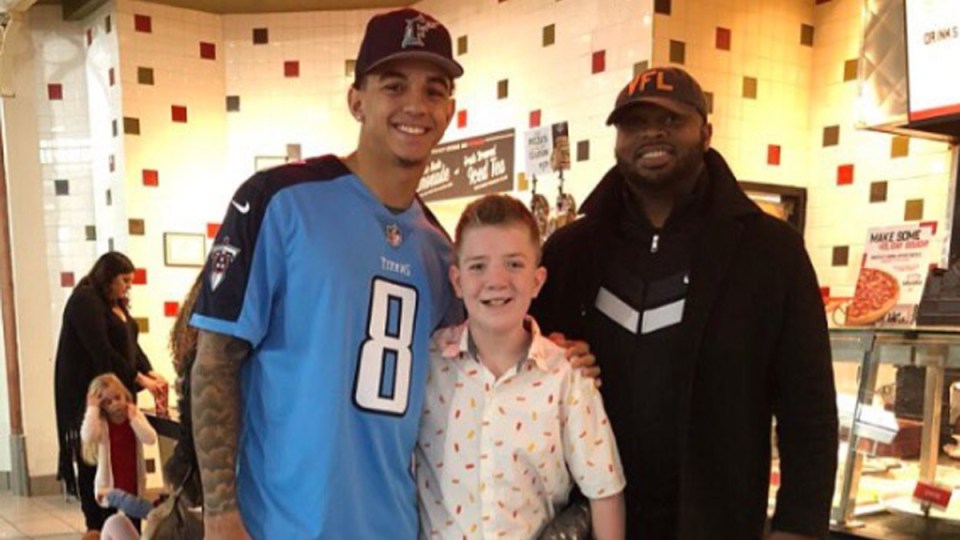 The sports world has rallied around American school boy Keaton Jones, after a heartbreaking video of him talking about the effects of bullying went viral.

Jones struggled to hold back tears in an emotional video (watch it below) recorded in his mother’s car during a school lunch break.

Answering a series of questions from his mother, Jones, among other things, said: “Why do they bully? What’s the point of it? Why do you find joy in taking innocent people and finding a way to be mean to them? It’s not okay.

“They make fun of my nose. They call me ugly. They say I have no friends.

“[They] poured milk on me and put ham down my clothes, threw bread at me.

“People that are different, they don’t need to be criticised about it. It’s not their fault.”

Writing on Facebook when posting the video, his mother, Kimberly, wrote: “For the record, Keaton asked to do this AFTER he had me pick him up AGAIN because he was afraid to go to lunch.”

Meet Keaton Jones a very smart little boy who is being bullied at school. This video is heartbreaking!! I want to bring Keaton to Vegas and hang out at UFC Headquarters. If anyone knows how i can reach the family please let me know. Thank u everyone pic.twitter.com/BR8c4ldDFc

White followed that post on Twitter by saying: “Thank u all for helping try to find Keaton. 1000% greatest post and response in my social media history. This kid is special and we all feel it. Dying to meet him!!”

White’s post triggered a range of similar offers, while others added supportive messages for Jones.

“It’s not wrong to be different. We all are beautifully and wonderfully made.”

Light heavyweight champion Daniel Cormier added: “Regardless of how dark it looks and how sad you may become, know that people are your friend and willing to stand with you.”

American golfer Paige Spiranac, NBA team Memphis Grizzlies and British boxer Tony Bellew also Tweeted about Jones, with the Grizzlies later adding they were “working” on a way to get him to a match as guests of the team.

Hey Keaton I think you’re pretty cool and I’d love to come have lunch with you! Say something nice to someone today. Bullying is never okay. https://t.co/FJZEBoYlsa

@Lakyn_Jones Hey there, we saw Keaton’s video & we want to help. Please follow back so we can DM you! #StandWithKeaton

This is truly heartbreaking! I’d love to teach this kid to fight and believe me the bullies would never bully anyone again after a good crack on the chin! Bully = Coward 😔

And the Tweets of support weren’t limited to the sporting world.

How the sports world rallied around a bullied American student