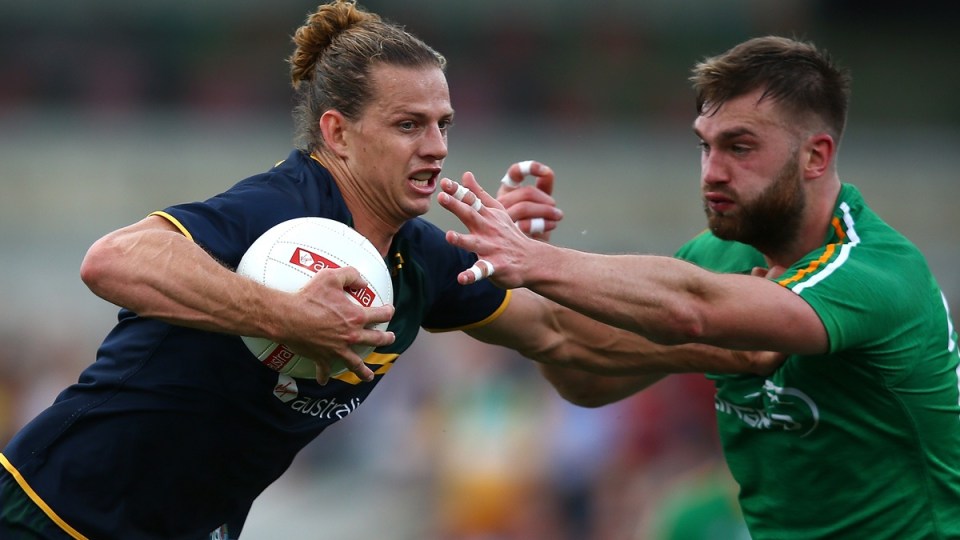 They even 'don't argue' in the International Rules. Photo: Getty

‘International Rules’. Even the name is a gimmick.

Just what exactly is the point of this every-now-and-then series between Australia and Ireland?

Slotted between the Spring Racing Carnival and the cricket, this neither-nor hybrid seems one of sport’s great irrelevancies.

Granted, Saturday’s Perth ‘Test’ was a mildly entertaining curiosity, and attracted a crowd of 30,116 fans, but who is hanging out for next year’s series?

Other than a finger injury to Scott Pendlebury and Joel Selwood’s cheap headshot, interest in the series – even in footy-mad Melbourne – has been minimal to say the least.

That initial intrigue has eased over time and Australian attendances, constantly above 40,000 until recently, have drifted.

Just 25,502 fans attended this year’s series opener in Adelaide and a large factor in Saturday’s turnout was it was the last sporting event ever held at Subiaco Oval.

Without that chance to say goodbye to an iconic, if outdated, venue, the attendance figure may well have been below 20,000.

These matches are played ‘off broadway’ – not in Melbourne – because other cities, more starved of football, will turn out.

This year’s series – won by Australia, in the highly probable case you missed it – has grabbed few backpage headlines.

Why? Because the AFL and the GAA [Gaelic Athletic Association] have not put their best teams on the park.

Leading Irish and Australian players put things like off-season holidays above representing their codes and countries.

Players from the All-Ireland champions, Dublin, decided to pass, as did members of Richmond’s premiership team, including superstar Dustin Martin.

Those defenders of this series insist it has got better in recent years after the Australian side was made up solely of players who had won All-Australian selection.

But just seven of the team picked in 2017 – less than one-third – wore the Australian colours this year. It’s a match-up of the best of the rest.

Only last week, Gaelic football legend Marc Ó Sé told the Irish Independent that the “bastardised game” had to go.

“It is not like representing your country at rugby and soccer, where you are playing your game in a global tournament which you know matters,” he said.

The series is “not just a poor man’s version of international sport, [but] a desperate man’s version”, he added.

The proof is in the ratings.

The Subi ‘Test’ was on Saturday night primetime in Australia, and could be watched over a breakfast ‘fry-up’ in Ireland.

To be fair, the series was a difficult sell in a week when Irish eyes were firmly fixed on weightier sporting matters.

Last weekend Ireland thrashed South Africa in union, while the Republic crashed out of the World Cup qualification process at the final hurdle.

Ratings for the Ireland-Denmark World Cup qualifier spiked at 1.1 million, while 631,000 in the nation watched the rugby. By comparison, the Adelaide ‘Test’ drew a paltry 39,600 viewers on RTE.

The Australian ratings were not much better.

By contrast, the opening match of the Rugby League World Cup between England and Australia spiked at 1.327 million, while 1.196 million tuned into Australia’s home World Cup qualifier against Honduras last week.

Before the Perth ‘Test’, Gillon McLachlan announced that next year’s series would include a game in the US, probably Philadelphia.

With New York, Boston and Chicago, Philadelphia has a strong GAA base.

Obviously, the AFL will use the game and the GAA base to promote its brand in Irish-American heartlands. But the chances of success are slim.

The GAA presence in the US is an expression of Irish nationalism and trans-Atlantic migration.

The AFL has enough trouble spreading its gospel to the Gold Coast, let alone selling Sherrins in Philly, Boston or the Bronx.

Maybe it’s time to give the series the ‘Subi’ treatment and bulldoze it before the AFL launches its next pie-in-the-sky scheme to ‘footify’ the world.