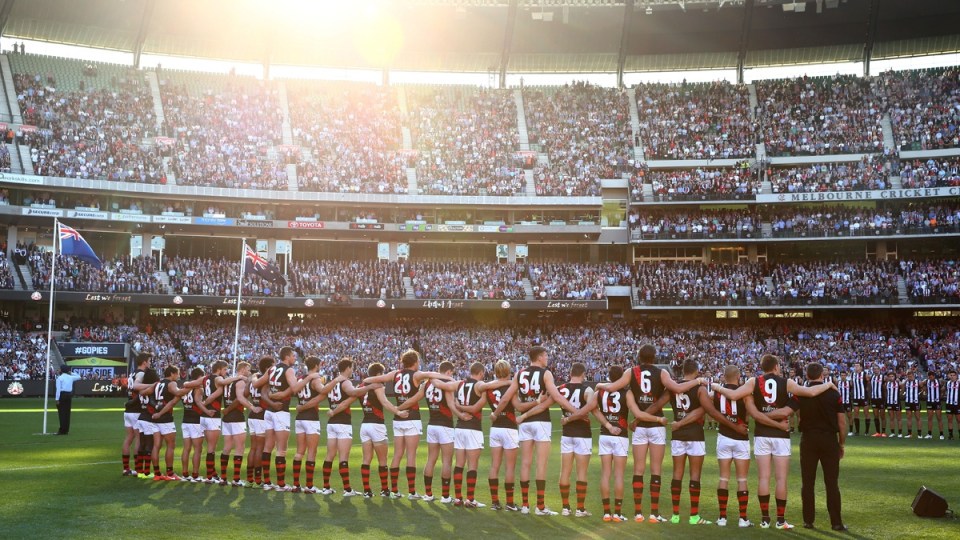 The day is meant to commemorate our servicemen and women, not be swamped by sport.

On Tuesday afternoon, eyeballs across Australia will be glued to the AFL blockbuster between Collingwood and Essendon or the NRL clash featuring the Sydney Roosters and St George Illawarra.

Then, if that wasn’t enough, the Melbourne Storm host the New Zealand Warriors in the evening, a match timed so those interested can make the short walk from the MCG to AAMI Park for kick-off.

This year’s lead-up to sport on Anzac Day has been worse than most; the so-called AFL ‘Anzac Round’ stretches from Friday night to Tuesday.

And no matter what the AFL or the game’s talking heads spruik, the match is now Anzac Day’s main event.

It shouldn’t be this way, but the AFL and RSL have been complicit in making it so.

Anzac Day was founded on sacrifice and slaughter, not a game of football.

Initially, it was mainly a day for the diggers to remember and reflect, with the odd game of two-up thrown in.

But this changed with the passing of the 1958 Anzac Day Act, which allowed the staging of football matches, as long as the governing bodies acknowledged the diggers, started games after 2pm [now 1pm], and shared revenues with the RSL.

From this point onwards, football and the RSL were joined at the hip pocket, with matches played regularly.

The bigger the game and greater the hype, the more money the RSL and football administrators pocketed.

The Collingwood-Essendon blockbuster, introduced in 1995, was met with concern by many diggers who thought a marquee AFL occasion would detract from the day’s true significance.

Their concerns were well founded.

Football’s corporate culture has cheapened Anzac Day and sponsors use it to associate their brands with the Anzacs.

Want an example? Look no further than the jumper Essendon will wear for the 2017 match, where a car logo has been planted on poppies symbolising the club’s war dead.

Lest We Forget, Kia.

Disappointingly, the AFL has bent the rules on Anzac Day.

With a ban on matches in Victoria starting before 1pm, they staged a 2015 clash between St Kilda and Sydney in Wellington, one of FIVE matches on the day.

It started at 11am (Melbourne time), when the diggers were still marching up St Kilda Road to commemorate 100 years since the Gallipoli landings.

The financial windfalls from providing sports media content to broadcasters were more important than the Centenary’s marches and commemorative services.

Fair play to our neighbours across the Tasman; they know how to respect Anzac Day.

Margaret Harris is ex-Kiwi military and a Phd student at Monash University whose thesis explores the Anzacs.

Harris told The New Daily that in “New Zealand sport and war aren’t symbolically linked” as in Australia.

“New Zealand avoids playing sporting games on Anzac Day because it is frowned on more generally by society,” she said.

“Anzac Day in New Zealand doesn’t have the celebratory nationalism that is present in Australian Anzac practice.”

Instead, Harris adds, “Anzac day … is a day for mourning”.

Next year, how about an Anzac Day without sport? It’s not a day for footy parochialism, corporate grandstanding or celebratory nationalism.

It’s about remembrance of our war dead.