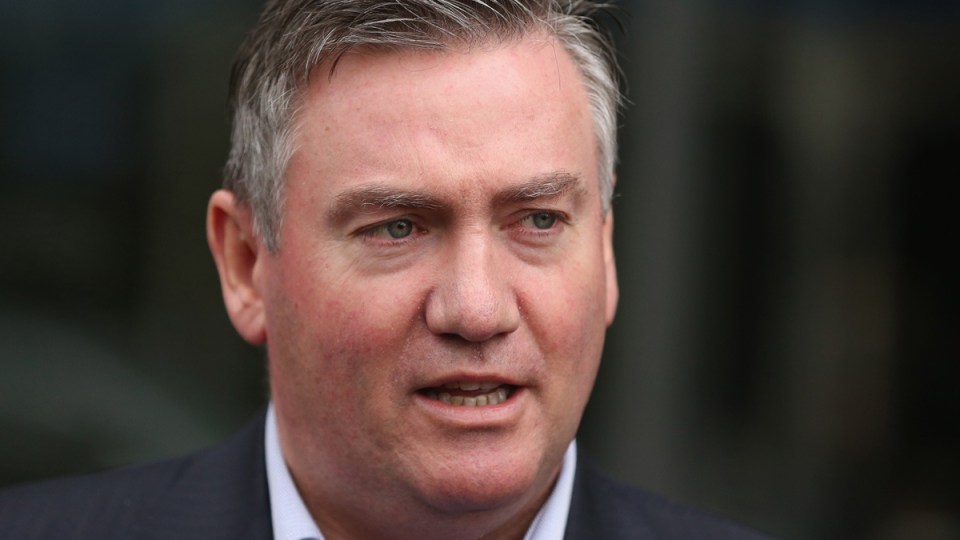 McGuire is not sure what to make of the saga. Photo: Getty

Media identity Eddie McGuire has had his identity stolen and been caught up in a ‘catfish’ saga on a popular US dating website.

The term ‘catfish’ has become the common term for people who use fake identities online to trick or extort unwitting victims.

A user of the dating website match.com, who claims to be a 60-year-old American man from Dallas, Texas, is using headshots of McGuire to try and deceive fellow members.

Triple M – who McGuire hosts a breakfast radio show for – reported the news on Friday morning.

The Collingwood president said he became aware of the fact a user called ‘allinone12’ was claiming to be him on Thursday when a woman made contact with his office.

And McGuire said the photos were definitely not of someone who shared an uncanny resemblance to him.

“It’s me,” he said on his Triple M Hot Breakfast program on Friday.

“I know because I know those photos.

“I’m trying to actually figure out what you do.

“This bloke has obviously thought ‘I’m far enough away from Australia, I’ll go through’.

“I don’t know whether to be outraged or slightly chuffed.”

The profile appeared to have been inactive for three weeks.

The news comes just a week after reports broke that nude photos of a young AFL player ended up on a pornographic website after he was tricked by a ‘catfish’.

Fairfax Media reported that the footballer thought he was chatting with a woman.

He then sent nude photos of himself, only to find out he had been conversing with a man.

A club spokesperson said the player, who remains unnamed, was remorseful for his “stupid decision”.

Why is it called ‘catfishing’?

A popular 2010 documentary called Catfish is behind the term.

It follows the story of an American man called Nev Schilman, who befriended a girl on Facebook.

The pair begin an online relationship and ‘Megan’ sent videos to Nev of her singing for him.

It later emerged that the clips came from YouTube and she was eventually outed as an older woman who posed as others over the internet.

Dating scams are not uncommon, with the Australian Competition and Consumer Commission (ACCC) finding Aussies lost $229 million in 2015 via online scams.

The ACCC said investment and online dating scams were the most popular.

Another week of headlines for Eddie

Comments emerged on Sunday from McGuire that saw him reveal he was under the influence of prescription drugs when speaking about ex-Sydney AFL footballer Adam Goodes in 2013.

McGuire infamously said that the Indigenous star should be used to promote the musical, King Kong, on radio.

The comments came just days after the 2014 Australian of the Year was racially abused by a Collingwood supporter during a match at the MCG.

“I haven’t really said this before, but I was on massive painkillers and crutches,” McGuire told men’s magazine GQ.

“[I was on] heavy-duty painkillers, antibiotics and steroids.

“I mean, the night before, I’d been hosting a function raising $300,000 for Indigenous scholarships [in football] … So I was doing all that and I should have stayed in bed that day [I made the comments].”

McGuire also said he hopes he can patch up his friendship with Goodes, who retired after being the subject of constant booing in the 2015 season.