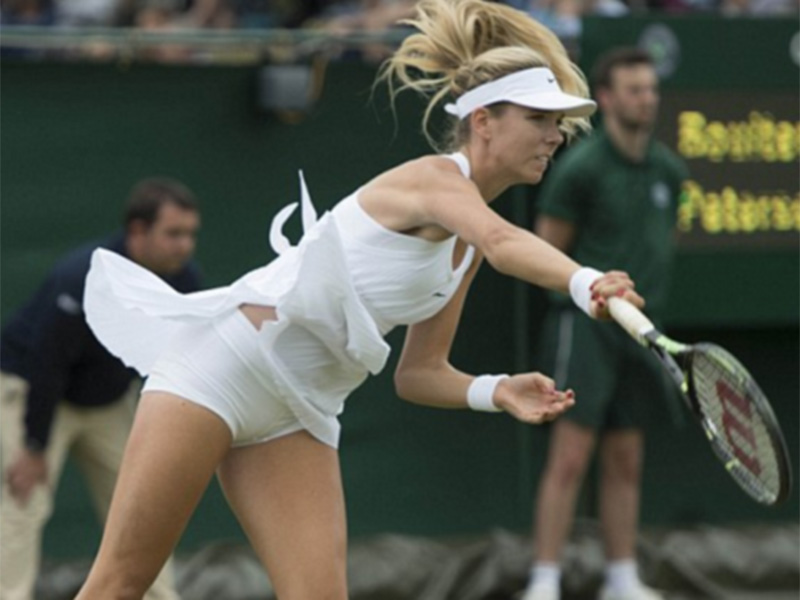 When the focus should have been on the imminent start to the world’s most coveted tennis grand slam, which begins on Monday, it was Nike’s Wimbledon dress receiving all the attention.

The revealing garment was deemed too short by a group of female players contracted to wear it.

The brand’s ‘Nike Premier Slam’ dress – to be worn by 20 Wimbledon competitors including Eugenie Bouchard and Australia’s Johanna Konta – has instead been recalled for emergency alterations.

A number of players complained the dress flew up above their waist during play, forcing Nike write to each player asking them to return the tiny garment.

“We need to make a small change to your dresses per Wimbledon rules,” the email read, according to reports.

“Could you please bring them by the Nike Wimbledon House.”

Next, in bold and underlined type, read the words: “this is VERY important”.

If Nike does manage to alter all 20 dresses before Wimbledon begins on Monday, the brand will have avoided a PR disaster.

In qualifying rounds, British player Katie Boulter’s undergarments were repeatedly on show as the dress flew up, while Czech player Lucie Hradecka was forced to pragmatically pair the dress with a pair of long white pants.

Ironically, Wimbledon’s famously strict All England Club had approved the dress because it passed it’s ‘white only’ colour rule.

But Nike’s tennis fashion wasn’t the only tiny garment taking people’s eye off the ball this week.

The dress that divided the golf world

When Dustin Johnson secured his first-ever US Open title this week, all eyes should have been on him.

Yet somehow the attention was turned to his partner Paulina Gretzky’s dress – and whether it was, in fact, a dress at all.

Ms Gretzky attended the trophy presentation in what those in the know would call a ‘T-shirt dress’, although others were adamant it was simply a shirt.

The 27-year-old model and performer, who is the daughter of ice hockey legend Wayne Gretzky, was seen pulling down the dress hem a number of times, although she seemed to have a pair of blue bike shorts underneath just to be safe.

Some on social media blasted a Fox News cameraman for zooming in on Ms Gretzky’s short hemline, while others argued the somewhat pervy-looking footage was unavoidable.

The camera crew for when Paulina Gretzky made her walk to the clubhouse pic.twitter.com/8tf8yrWnME

This was the fashion news that had a real impact on the sports world this week. The AFL confirmed to The New Daily it is in the process of designing its AFL women’s league uniforms.

According to head of commercial operations Darren Birch, the lead players’ group have told the AFL their current uniforms – replicas of the men’s – don’t cut the mustard for a number of reasons.

“They told us the arm holes are too big, the back doesn’t really fit and the shorts are a real problem,” Mr Birch said.

One aspect the players weren’t interested in changing was the traditional short-sleeve jersey.

“They’ve all grown up aspiring to that,” Mr Birch said, noting that it was one of the “unique” identifiers of the sport.

Despite wanting to maintain some semblance of tradition, he said we were likely to see some interesting changes – like players being allowed to wear long-sleeved compression tops or pants during games.

“We have a chance to really be creative,” he said.