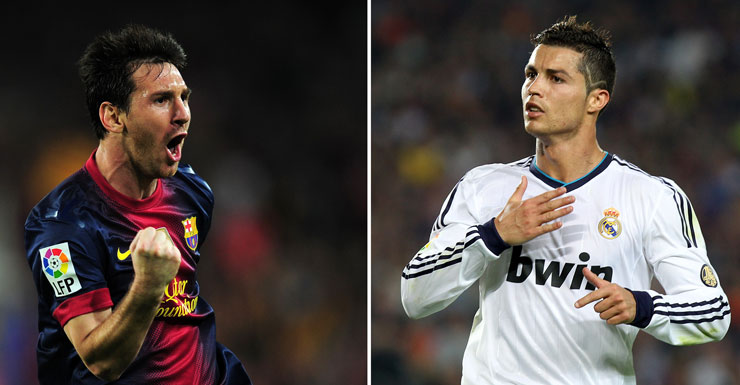 Lionel Messi, left, and Cristiano Ronaldo have dominated the Balon d'Or award for the past decade. Photos: Getty

The times, they are a-changin’.

The Forbes Rich List of the world’s 100 highest-paid athletes has been released for 2016 and, tellingly, it’s not topped by boxer Floyd Mayweather or golfer Tiger Woods.

Ronaldo raked in a staggering A$117.6 million in salary and endorsements in the 12 months to June 1, 2016, according to Forbes.

Jason Day was the sole Aussie on the list, coming in at equal 69th for earnings of $A35.1 million.

Baseball had the most representatives, with 26 inclusions in the list, while the NFL had 21, basketball 18 and football 12.

There were no motorsport entrants in the top 10, with Lewis Hamilton (11th) and Sebastian Vettel (19th) missing out.

Woods, who dropped to 12th, had A$60.2 million of his A$60.6 million come from endorsements as he struggled to get on the course due to a back injury.

He brought in A$43.5 million but that figure is expected in the company’s next list, given the Olympic year that it falls in.

Bolt is aiming to win gold medals in the 100m and 200m sprints for the third successive time at an Olympic Games.

Serena Williams, at 40th, is one of just two women on the list. She is joined by the banned Maria Sharapova, who is 88th.

Wayne Rooney is the highest English Premier League player on the list, at 49th. Sergio Aguero, Bastian Schweinsteiger and Eden Hazard all cracked the top 100.