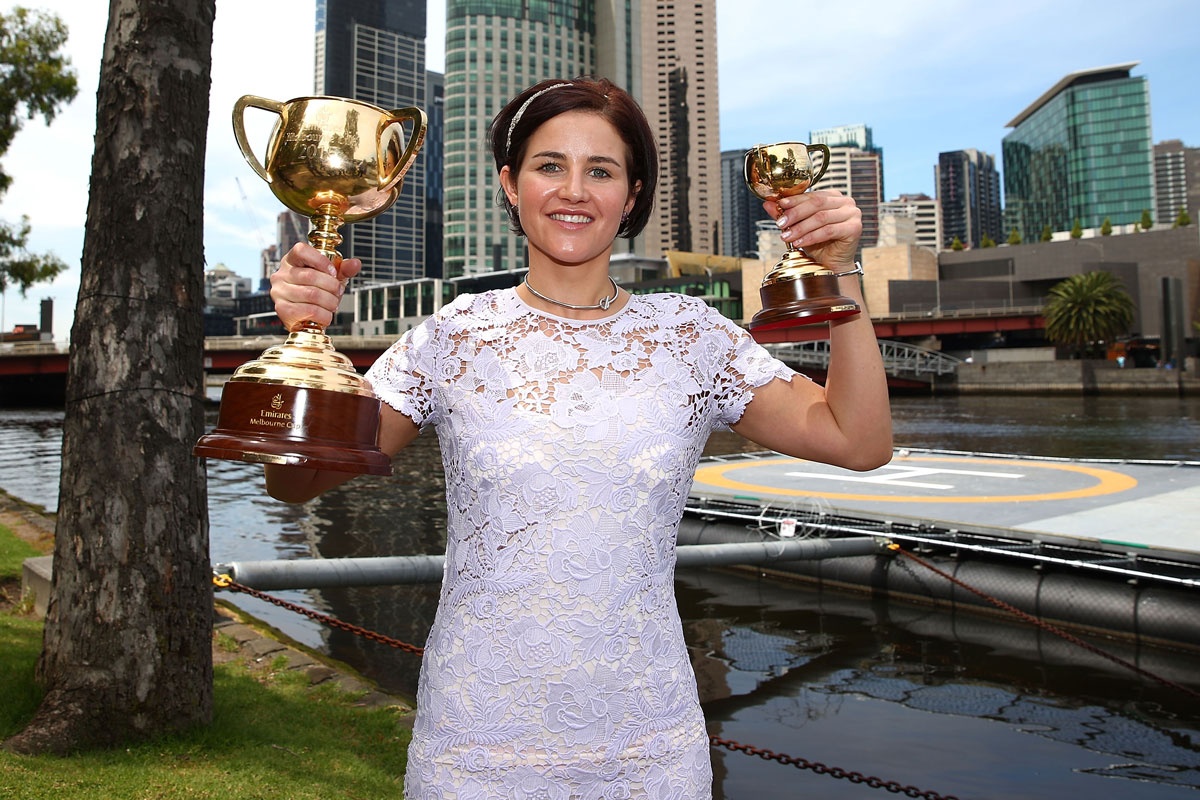 Michelle Payne is being credited with igniting a new golden era for women's sport. Photo: Getty

This was an outstanding year for Australian women in sport – on and off the field.

In one of the year’s most climactic scenes, Michelle Payne, riding 100-1 long shot Prince Of Penzance, timed her run to perfection to become the first female jockey in the 155-year history of the Melbourne Cup to win the race.

Her victory, and post-race comments calling out sexism in her sport, struck a chord with women everywhere – not just those with an interest in racing.

• Highs and lows: TND‘s sporting moments of 2015
• The sporting pictures that defined a dramatic year
• The parent trap: champion offspring do it tough

Her delicately chosen words – “get stuffed” – have gone down in Australian folklore, and more importantly, she has forced the racing industry to rethink its attitudes towards women jockeys.

Coincidentally, Payne was wearing the colours of the suffragettes: purple, white and green.

The Matildas took us on a wild ride all the way to the quarter-finals of the World Cup, achieving something the Socceroos have never managed – a win in the knockout stage of the tournament.

Like Payne, the Matildas turned their focus to matters of equality.

They boycotted their American tour, stepping up their fight for better pay and conditions and more respect from Football Federation Australia.

It was also a superb year for netball and one woman in particular.

As influential as Geitz was in the final against New Zealand, her crowning moment came in the final seconds of the dramatic trans-Tasman netball championship decider between the Firebirds and the Swifts.

Down for most of the match, the Firebirds snatched the lead with 15 seconds to go.

Fittingly, Geitz pulled off an intercept right at the end to win it for the home side, 57-56.

It may have taken 150 years but finally Wisden has a designated women’s award.

You can never be too meticulous in your planning.

The inaugural Leading Woman Cricketer in the World gong went to Lanning, who among many feats led Australia heroically in England.

The Stars regained the Ashes – their first series win in England in 14 years.

While that was going on Cricket Australia was putting the finishing touches on the inaugural Women’s Big Bash League.

It’s a bright new era not only for the talented women who play the sport, but also for the army of girls who slop on the sunscreen and put on the pads during the school holidays to carve their names into suburban folklore.

That’s where it all begins – the backyard, the park, the local nets, and now it won’t have to end there for girls.

A week ago history was made with the first-ever televised WBBL match.

In a boost for the sport, Network Ten has upgraded the Melbourne derby on January 2 from One HD to its main free-to-air channel.

“She’s the best women’s cricketer in the world and it’s a good chance for everyone to have a look and see how good Meg Lanning is. That was a factor in our decision,” Ten Head of Sport David Barham told News Corp.

In another significant breakthrough for women’s sport, the AFL declared it would “push everybody to be a bit more adventurous” in its quest for a national women’s league in 2017.

The AFL has boldly stated it will poach players from other sports in its quest to become “the sport of choice” for females.

Bullishness aside, this is an exciting time for girls and women who play Australian rules.

This snapshot tells you: Australian sportswomen have had an exceptional year and change is afoot.

The success of Australia’s female athletes can absolutely play a part in changing deeply entrenched perceptions about women’s sport being boring (as the blowhards suggest).

Years like this one will help us see our sportswomen for what they are.

‘What a hit’: Albanese on attack after dire wages data
Inquiry into mother’s convictions over deaths of four children
Viagogo loses appeal over $7 million penalty
Sydney home sprayed with bullets in gang violence
‘Admit what the hell is going on’: Biden wants US to face White Supremacy problem
Device detonated, man arrested in Brisbane sieges
The sporting pictures that defined a dramatic year
Today's Stories

The best thing about sport in 2015? The women