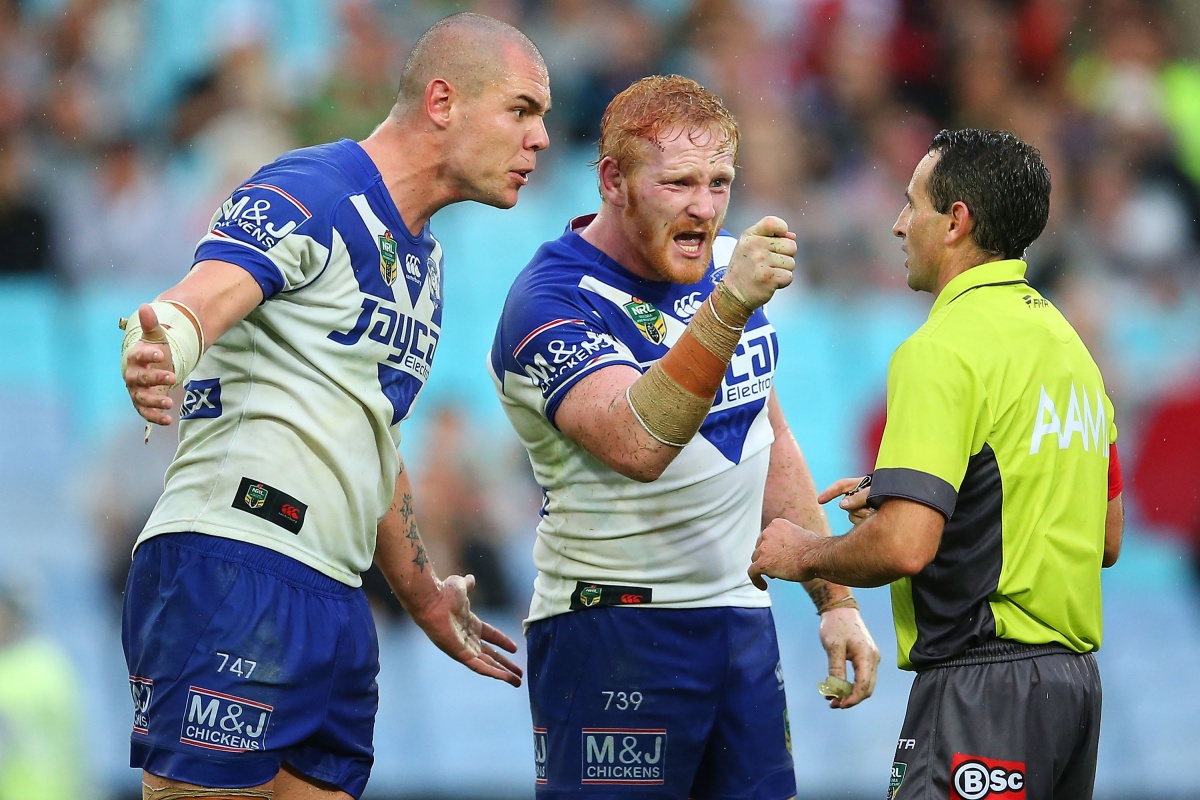 Wrong decision or not, nobody likes to see the type of scenes that occurred in the closing stages of South Sydney’s dramatic win over the Canterbury Bulldogs on Good Friday.

Four Bulldogs players, including captain James Graham, have accepted bans for a variety of misconduct and dangerous activity charges and have apologised to team-mates for the outbursts.

While league purists argue the referee’s penalty ruling was wrong and the time it came in the game meant it tipped the result, there is still no excuse for the players’ intense remonstration.

The on-field reactions were extreme, but they’re certainly not the worst we’ve seen in the sporting world.

Check out the list below for some of the wildest examples of referees under fire:

Individual sports are breeding grounds for mental demons and outbursts – there’s no-one to blame or argue with other than yourself.

And when the self-loathing gets too much, the referee becomes the target. Just ask tennis stars John McEnroe, Goran Ivanisevic and Ilie Nastase who dished out some great bakes to chair umpires over the years.

But when it comes to anger on the court, Serena WIlliams’ disqualification in the 2009 US Open Semi-Final for threatening to shove the ball down the linesman’s throat, is hard to beat.

The Central Coast Mariners trailed Newcastle Jets 1-0 in the closing stages of the 2008 A-League Grand Final and when Jets midfielder James Holland clearly hand-balled a corner in his own area everyone thought the Mariners would have a penalty chance to equalise from.

Everyone except referee Mark Shield. What followed was a classic case of a soccer team crowding referee, but one player took it too far.

That was Mariners’ goalkeeper Danny Vukovic who slapped the hand of former World Cup-official Shield, which resulted in a nine-month ban for the shot stopper.

After becoming a silky-skilled fan-favourite in 66 games for Collingwood Phil Carman moved to Melbourne and then Essendon.

It was for the Bombers that he was given a whopping 20-week suspension for striking an opposition player and head butting the umpire.

For the record, ‘Fabulous Phil’ was then reported in his comeback match.

Springbok fan takes matters into his own hands

Players caught up in the heat of a game’s passion is one thing, but a fan entering the field of play to tackle a referee is a whole other level.

It happened in 2002 during South Africa’s Tri Nations clash with New Zealand in Durban, when Springbok supporter Pieter van Zyl, 46, tackled referee David McHugh as he stood over a scrum. Players on both sides quickly pulled the man off the referee, getting in some rough justice of their own at the same time.

Mr van Zyl’s attack dislocated Mr McHugh’s shoulder and he was jailed for three months, fined and banned from attending all rugby matches in South Africa for life.

Croatian boxer Vido Loncar caused wild scenes after his losing bout at the 2014 European Youth Boxing Championships in Zagreb, when he viciously attacked the referee.

The young fighter was obviously livid with the referee’s decision to hand the bout to the Lithuanian opponent which prompted the Croatian to let fly with a flurry of punches.

Via the Kuwaiti Premier League, we present to you a referee sick of players who refuse to take a decision as final. A man not happy with the universal chiding and abuse that comes the way of him and his colleagues.

Players prod, push, scream and grab at the referee and very quickly, it all becomes too much.

There’s something about the NHL and ice hockey in general that produces incredible punch ons – so it was only inevitable that a referee would one day be inadvertently hit while caught up in a fracas.

That happened in early 2014 when an NHL linesman went in to break up a fight between Colorado Avalanches and Chicago Blackhawk’s players. As the swinging got wiling a stray arm connected with and floored the poor official, who to his credit was straight back to his feet.

Funnily enough, things settled once everyone realised what had happened.