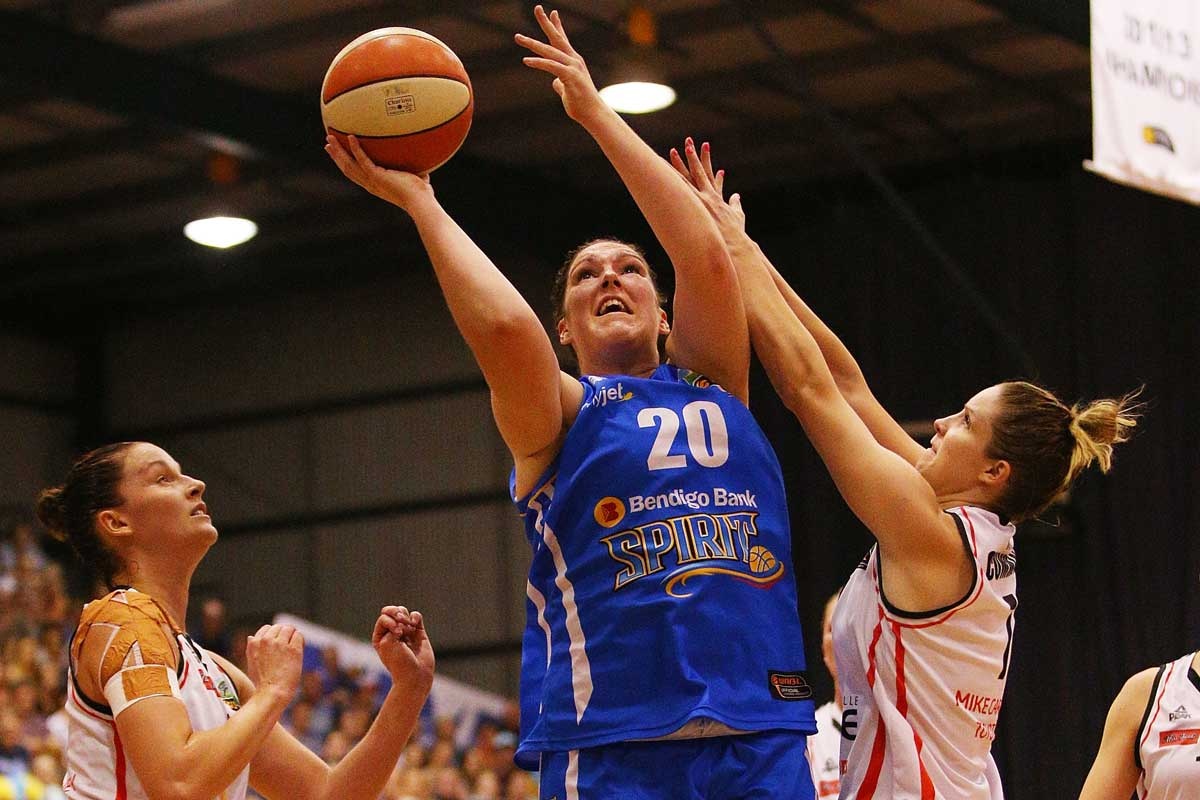 Here’s a question – can you imagine, in five years time, a sell-out crowd at the MCG watching the Australian women’s cricket team?

Can you imagine that crowd in full voice cheering on Lanning, Perry and Blackwell?

Some of you might be thinking there’s more chance of Clive Palmer and Jacqui Lambie eloping off to Beijing – arm in arm, whispering sweet nothings and giggling their way through customs.

• Is tennis the thinking man’s lingerie football?
• UFC and the women who love it

But it’s worth pondering. Is it possible for women’s cricket to reach such heady heights of popularity in a matter of years? Or does this thinking belong in the kingdom of the airborne pig?

For women’s sport to grow you need momentum and you need visibility.

The ABC’s decision to axe its coverage of the Women’s National Basketball League and soccer’s W-League at the end of the current season is not the way forward.

Faced with $254 million in budget cuts it can’t have been an easy decision, but it was a decision they took. (The ABC currently shows one live WNBL game on Saturday, and a live W-League match on Sunday).

There are gloomy ramifications to these actions. Women’s sport is all too often the first to go.

For basketball and soccer it’s a kick in the guts in the fight for equality. Less exposure will make it difficult for both sports to retain their sponsors if another broadcaster doesn’t come on board – it’s, sadly, the same old story.

If we use performance as a measuring stick to justify coverage and investment, then the second-best women’s team in the world, the Opals (some of whom play in the WNBL) surely qualify for a leg-up?

Perhaps they could have mounted a more persuasive case if they were number one?

We owe it to the next generation to keep fighting for equality – or at the very least a fair go.

In the past few months some eye-catching things have happened in women’s cricket.

Recently crowned women’s Twenty20 cricketer of the year Meg Lanning is on target to smash records in both short formats of the game.

The Southern Stars captain led the team to a 4-0 clean sweep of both the one-day and Twenty20 series against the West Indies. That was this month – in August they dished out the same treatment to Pakistan in the WT20 series.

Even those who don’t follow women’s cricket have heard of Lanning and her talented accomplice Ellyse Perry.

All this ‘noise’ builds profile, awareness, respect (from both sexes) and momentum. So it’s a real shame we won’t see the Southern Stars shine on the international stage until next July’s Ashes tour of England.

The international summer of cricket is already over for the women before the first splash of sun block.

It all boils down to a case of bad timing. The Cricket World Cup starts in January, making this a unique summer.

Luck is another key ingredient needed for women’s sport to prosper.

The women’s schedule was done to match the men’s T20 internationals, which were staged this month. This allowed for double-headers with guaranteed television coverage. Normally these matches are held in January.

Instead the women will spend the summer playing for their respective states in the domestic WT20 competition with eight matches played as curtain raisers to the men’s Big Bash League.

For those who answered ‘no it’s not possible’ to my opening question here’s something that might make you raise an eyebrow – or two.

Last weekend a record crowd of nearly 46,000 turned out at Wembley to watch the English women’s football team take on Germany in a friendly.

The weather, true to form, was miserable, but the passionate crowd still outnumbered the 40,000 that turned up to watch the men’s friendly between England and Norway in September.

That is a remarkable (and heartwarming) fact.

Despite England losing 3-0 the record number of fans never lost their voice. It was a night of triumphs. The BBC provided live television coverage and a generation of girls got to see their team as equals to the men for the first time.

Momentum built from the London Olympics played a large part in making this happen. There has been a shift in the national consciousness. Women athletes are seen in a new light – they certainly command new respect and are building a new audience.

In Australia in 2015-16, a Women’s Big Bash competition is due to start. Who knows what effect it will have on a younger generation of sport fans.

You might even have to set off early to grab a seat.