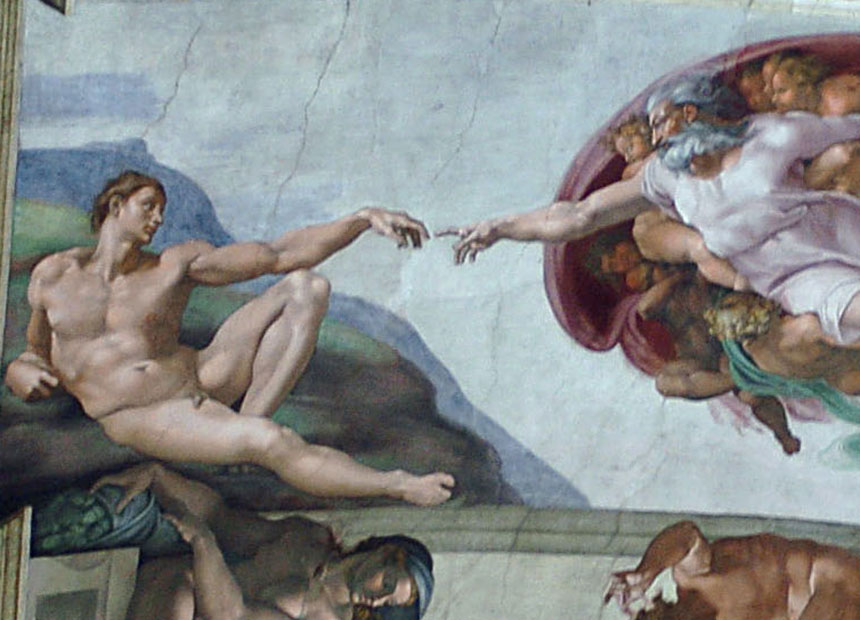 I remember walking through the Sistine Chapel – my thighs squeaking (I had been in Italy for two months and my “diet” of red wine – large glass thanks, and pasta, yes I will have seconds – was beginning to re-shape my once slender frame).

So there I was squeaking along, my neck bent backwards – eyes on the ceiling – a look of marvel fixed on my face.

The Creation of Adam, The Last Judgement – now here was a man touched by God. It moved me. Take me hostage and let me stand in awe forever (and bring me a pizza with the lot and a family-size bottle of Chianti. And don’t skimp on the garlic bread).

• Adelaide Oval: where women count for nought
• Beauty and danger: how I fell for cage fighting
• Exit Sandman: Pippos on Crows’ bloodletting

Michelangelo, sculptor-turned-painter – years on his back, lying on his own scaffolding. I wondered about the pain and suffering he endured, the epic scale of his achievements, his controversial lost fresco.

What were his inspirations? What did he do during his lunch break? All these questions …

You see, not all sports journalists fall into a deep sleep at the mention of the word ‘art’.

Not all sports journalists drag their knuckles and dribble at meal times. Not all of us faint at the sight of tofu, and not all of us break out in a rash when we go to into a museum.

Some of us even read books – books with small print and no pictures – not for a bet, or at gunpoint, but for actual pleasure.

Some of us love architecture, some of us even listen to, shock horror, classical music – and not while waiting to place a bet on the market mover for the last at Moonee Valley. No, some of us actually listen purely for joy.

But it’s also true that some lovers of the arts have their heads so firmly wedged up their buttocks they’ve learnt to walk in the dark.

Being bad at sport doesn’t give you license to belittle it.

I have an appreciation of the arts. Of course I do. But sport has provided me with my own path – my own yellow brick road.

And what a journey it’s been.

The highs, what searing, searing highs. Tony Modra reaching to the heavens, back-to-back premierships in ’97 and ’98, both as underdogs; a serendipitous night out with the late, great Ayrton Senna (… it was a balmy Adelaide evening, the sweet smell of jasmine filled the air, the smile on his moist lips as I approached …); Cathy Freeman in full flight; Cadel Evans, glass of champagne in hand, yellow jersey his for the keeping.

So many glorious sporting moments, moments of inspiration, nail-biting tension, adversity and euphoria.

As a nation we bat above our average when it comes to sport. Unless, of course, you’re an Australian batsman.

Then there are the life lessons – learnt from such a tender age.

Sport was my first love.

I was rarely without a netball, football or cricket bat in my hand. I lived for Saturdays.

I believed I had the natural talent and flair to represent Australia on the netball court. Many a restless night was spent waiting for the growth spurt. If only Joyce Brown’s Netball The Australian Way, which I slept with under my pillow for two years, included a chapter on the realities of genetic disposition.

Sport has taken me gently by the hand and shown me the way; it’s taught me about friendship, teamwork and boundless human endeavour.

It’s taught me how to be gracious in defeat, like Kevin Muscat, and humble in victory, like Shane Warne.

Sport has led the way with its groundbreaking equality towards women – respect, recognition, equal pay, equal opportunities …  cough cough (sorry I seem to have something stuck in my throat).

Where was I? Ah yes, there is beauty in all things – golfing outfits, footballers’ haircuts, former AFL players squeezed into pastel shirts.

So much diversity. So much beauty.

I have sport to thank for my spiritual balance and this brings me back to Michelangelo.

I did manage to find out what he did on his lunch break – and I was amazed to discover he actually played five-a-side football with his plasterers.

Did sport provide Michelangelo with some kind of inspiration?

And what about his controversial lost fresco? Well it’s recently been unearthed in Rome by the great art historian Umberto Lombardo – and it depicts, quite beautifully, a very dramatic penalty shootout between Jesus and his Apostles.

Jesus is in goal. He was, of course, a brilliant goalkeeper.

The painting shows Christ at full stretch tipping one over the bar from Simon Peter – who, legend has it, was a bad sport.

Matthew in the Corinthians quotes Judas: “Simon Peter assured me he never put his full weight behind the shot because he didn’t want to embarrass our Lord, but me and the lads knew he was just a sore loser.”

The truth is no one ever scored against Jesus.

So it could be argued that the inspiration behind Michelangelo’s great monument to what man is capable of achieving came from sport.

Ladies and gentlemen, the path to enlightenment is off the boot of Michelangelo – not his paintbrush.

This is the text of a talk given by Angela Pippos in a debate at the Ian Potter Centre on the topic: ‘The path to enlightenment: sport or art?’

Angela Pippos on sport, art and Jesus the goalie