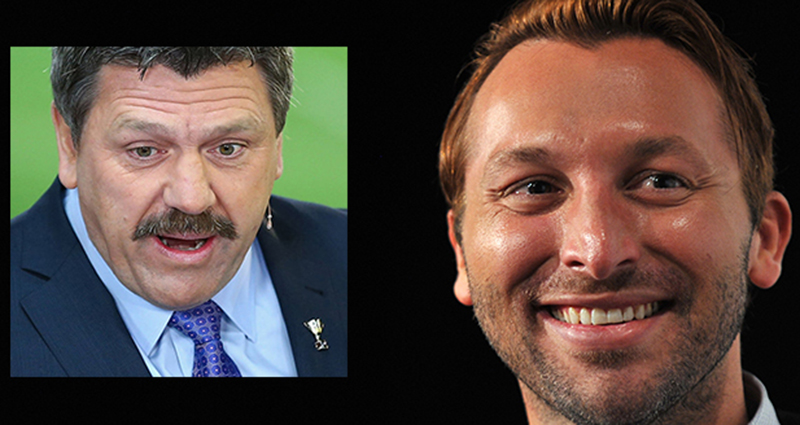 The synchronicity was extraordinary.

Less than 24 hours after Brian Taylor called Geelong’s Harry Taylor a “big poofter” on Channel Seven, Ian Thorpe “came out” on Channel Ten, finally sating the public’s (or perhaps the media’s) bizarre bloodlust to know which side he bats for in the sexuality stakes.

Radio broadcaster 3AW stood Taylor down on Sunday so that he could “collect his thoughts” after the furore of the night before.

• ‘I’m not straight’, Thorpe tells Parkinson
• Praise and big love for Ian Thorpe
• Ian Thorpe’s tell all interview about nothing

Hopefully Taylor used some of his spare time to step into Thorpe’s size 17 shoes, because here, writ large, was a living, breathing example of why his comments matter.

In an agonising interview, Thorpe explained how he had been denying “accusations” that he was gay since his days at an all boys school. He described being called a “faggot” and “poof” in the street, and how he had to constantly deny his true feelings. He was consumed by pain and anger and was petrified about the reaction from family and friends.

Most disturbingly, Thorpe told interviewer Michael Parkinson that he was “a little bit ashamed” that he didn’t have the “courage” to come out earlier, as though this somehow reflects on him, not those judging him.

He does not want others to go through the same experience. “I don’t want young people to feel the same way that I did. You can grow up, you can be comfortable, and you can be gay.”

Given the events of the weekend, it was a timely and powerful message.

If Channel Seven is not prepared to act – other than offering the standard “counselling” – then Taylor should blow the whistle on himself.

After reflecting on the case of Thorpe and the thousands of anonymous young people who find themselves in a similar boat, the commentator should voluntarily stand aside from his duties on Seven next Saturday. If not, at the very least he needs to provide a fuller apology that demonstrates a greater understanding of the issue.

But at this stage, neither Seven nor Taylor have inspired much confidence.

They seem to believe that the primary offence was to Harry Taylor.

“I sincerely apologise in regard to Harry Taylor and anyone – and particularly Harry and any of his friends – that were offended by my remark,” Taylor said on Saturday night.

On Sunday, he was at pains to tell his 3AW colleagues that the Geelong player “was personally not offended”.

That is hardly the point.

Harry Taylor is a self-assured athlete who happens to be married (if only that were not relevant) and who appears to have a vastly more sophisticated understanding of the potency of Brian Taylor’s comments than either the commentator or his network.

In accepting the apology, the Geelong player said: “Our club respects diversity in our game and in our society and I know all of our players are very big on that and I don’t think those things should be said in our game, but also in society.”

It is blindingly obvious that it is not the likes of Harry Taylor who are the most vulnerable as a result of the sentiment expressed by Brian Taylor.

Commentator and network are well behind the curve on this issue.

A player, for example, would face action under the AFL’s vilification and discrimination policy if he uttered the same words on the field.

The not-so-neanderthal NRL this season suspended Mitchell Moses for two matches for calling an opponent “a f—ing gay c—“ in an under-20 state-of-origin match.

Bear in mind that Moses is a teenager and was speaking to an opponent in the heat of battle. Some, including this writer, believe he was perhaps treated harshly, that counselling would have been the right option in this instance.

Taylor is 52, an experienced, professional broadcaster and was speaking to an audience of hundreds of thousands, including many school children.

His remarks reflected the most juvenile, schoolyard gay stereotype. Harry Taylor’s “crime” was to wave at the crowd in a regal (“poofy?”) manner as he was carried off after his 150th game, rather than conducting himself in a supposedly more “manly” manner.

This column would not presume to suggest that Brian Taylor is homophobic, He was playing for a cheap gag, which is as old as Monty Python’s “no poofters” sketch.

But his homophobic language gives further licence to the casual, exclusionist prejudice that isolates so many vulnerable young Australians. Taylor has form in this area, pronouncing the look sported by fellow commentator Seb Costello earlier this season as “gay”, equating it with “bizarre”.

Tellingly, the reaction from his fellow commentators on both occasions was to laugh along with the schoolyard jokes, reflecting the smug blokiness that pervades so much AFL commentary these days.

But, as the Thorpe story makes plain, this is not harmless fun. There are real life victims. Most will endure their pain away from the public glare. But if Channel Seven and Brian Taylor needed an obvious example to drive the message home, he was staring them in the face on Sunday night.