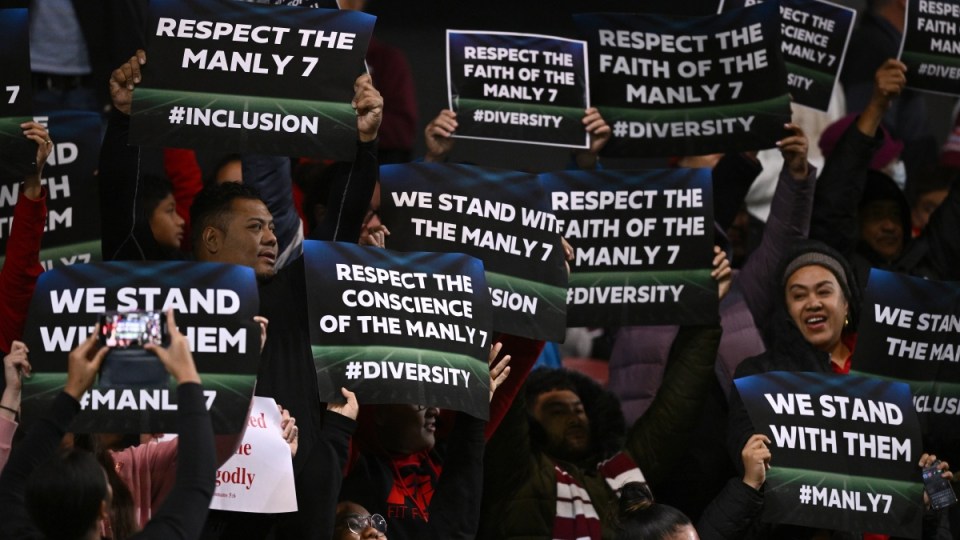 Some fans at 4 Pines Park showed support for the Manly players who boycotted the rainbow jersey. Photo: AAP

Daly Cherry-Evans claims only understanding and acceptance can bring Manly back together as he tries desperately to keep the club unified in the run to the finals.

The Sea Eagles were gutsy in the 20-10 loss to the Sydney Roosters, playing without the seven men who refused to wear the club’s rainbow jersey on religious, cultural and family grounds.

But a significant challenge still awaits, with the players to return at home next week against Parramatta and another week in the spotlight likely.

Coach Des Hasler claimed on Thursday night he hoped the group would be shown some sympathy by fans, after not being consulted in the lead up to Manly’s inclusivity jersey.

Likewise Manly captain Cherry-Evans said it was vital players welcomed them back with an open mind, pointing to the values the inclusivity initiative had tried to represent.

“It’s really important for us to understand where everyone comes from,” Cherry-Evans said.

“How can we not go in there and understand and accept what people have done if we are out here trying to promote inclusiveness and diversity?

“It’s not easy … there is human emotion to this, so it’s never going to be perfect.

“But I always see the opportunity in things. I think this could be a chance for us to come together and understand a bit more about each other.”

Next week’s clash shapes as crucial for Manly, who now need to win up to four of their last five games to make the finals.

When asked if Manly’s fight on Thursday night was a statement of how unified the club were, Hasler admitted the Sea Eagles still had some work to do.

“It’s been very emotional on all different aspects,” Hasler said.

“It’s never going to be solved but at the same time we certainly don’t want to be shying away from it.”

Hasler also said he could see the seven players being willing to take up to offer from club great Ian Roberts, who broke new ground when came out in his playing days, to meet with them.

Manly intend on wearing the inclusivity jersey again next year, with owner Scott Penn confident the players would feature and hopeful it will be part of a league-wide initiative.

However Cherry-Evans has warned the game has to be careful at times not too push too much on players without proper consultation, be it with any issue.

“We need to be really careful about how much we push on players to commercialise the game,” the players’ union general president said.

“If you look at a dressing room as an NRL squad, it is very diverse and very inclusive.

“I think at some stage we need to understand that sport is pretty inclusive. It’s not perfect, it does have boundaries.

“I know from my time in the game it does represent a lot of the things we are talking about.

“But unfortunately when people get put in a position to have to do something they don’t want to do, that’s when you see positions like (Manly faced).”

Manly offer understanding to their seven