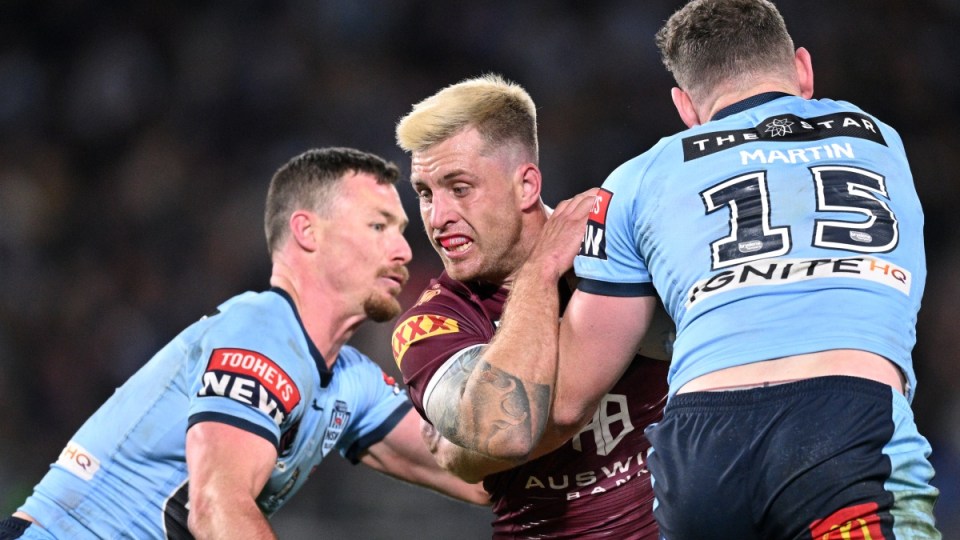 Queensland's Cameron Munster was a deserved man of the match. Photo: Getty

Isaah Yeo came within a metre of scoring the equaliser for New South Wales in the final seconds Wednesday night before Queensland held on for a gutsy 16-10 win in the series-opening State of Origin encounter.

The match marked the first State of Origin game in Sydney since 2020 after COVID restrictions robbed NSW of a home match in 2021, when the Blues claimed the series 2-1.

For Queensland, the win was its first in the NSW capital since game two of the 2017 series.

After conceding the first try of the match to Blues centre Jack Wighton in the 15th minute, the Maroons overcame a series of handling errors to take the lead shortly before halftime and win the crucial first match.

And despite some inspired play from NSW captain, fullback James Tedesco, the Blues were unable to break through a dynamic Queensland defence for most of the second half.

“That this is the response that we wanted and any player who played last year, we wanted the chance to come back and show that the jersey means something to us, and it was a good start,” Maroons captain Daly Cherry-Evans said after the match.

“The series is not won but that’s a good start,” he added.

While Queensland led for most of the game, the partisan NSW crowd of more than 80,000 at Accor Stadium were on their feet in the final minutes as the home side came close to levelling the match.

A 16-4 lead was reduced to six points when Cameron Murray scored for NSW with seven minutes to play, and it was only the fulltime siren that ended a Blues counterattack that came perilously close to denying a Queensland win.

NSW must now overcome a near 30-year hoodoo to retain the State of Origin shield.

Only one side this century – the 2017 Maroons team – has lost the first game with home-ground advantage and gone on to claim the series.

“It was a bit sloppy. We probably lost [the game] that period just before halftime and then after halftime they came out firing and we didn’t respond well enough,” NSW halfback Nathan Cleary said after the match.

“They scrambled hard and saved us a couple of times just before the line and that’s what Origin’s about.”

Former Origin great Billy Slater, who retired in 2018, was part of the 2017 Maroons team, and he marked his opening match as Queensland coach with a gamble that paid dividends.

Slater’s bold selection of four debutants in his inaugural side paid off as Pat Carrigan, Reuben Cotter and Selwyn Cobbo played key roles in the gritty victory.

Jeremiah Nanai, who was also playing his first Origin match, overcame a nasty ankle injury to return in the second half and relieve what had become a two-man bench after Xavier Coates’ first-half injury.

Cobbo set up Queensland’s the first try when he gathered the ball and kicked in-field to find Dane Gagai five minutes before halftime.

Carrigan was instrumental in swinging the momentum of the match when he came off the bench in the first half and Cotter was key in a dogged Queensland defence with  total of 49 tackles.

Cherry-Evans sliced through for a try in the 49th minute, while Ponga set up two more and Munster broke the Blues’ line numerous times and came close to scoring twice.

Valentine Holmes rounded out the Queensland score by adding a 54th-minute try to his two conversions.

The Origin series nows head to Perth with the Maroons in the box seat ahead of the third game at Brisbane’s Suncorp Stadium on July 13.

“It’s a leg in the door but we did that a couple of years ago when we won the first game and then lost three in a row, and [NSW] will come out and play a good style of footy, and chance it in the second game because they are down 1-0,” Munster said.