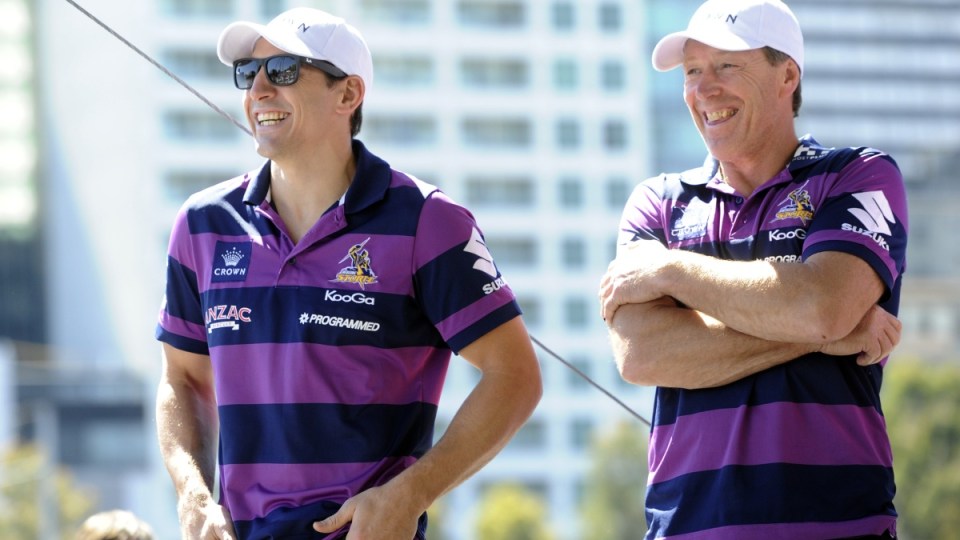 Bellamy is yet to make a call on whether 2022 will be his last as Melbourne Storm coach before moving to a director of coaching role with the club.

Slater, who will be Queensland’s State of Origin coach this year, has been touted as a replacement.

Despite not serving a traineeship as an assistant coach like Bellamy and most other coaches in the NRL, Slater has the runs on the board, says Bellamy.

The 38-year-old played 319 games with Melbourne, wore the Maroons jumper 31 times and played for Australia in 30 Tests.

Club legend @billyslater got mic’d up for Storm’s on-field warm-up on Sunday! Listen in 🔉⚡️

Slater still works with the club on a regular basis and was out on the field helping the team warm up for last Sunday’s match against Canterbury Bulldogs.

“For me, I probably felt it was probably a good thing for me as that’s the sort of person I am and the way I do things and handle things.

“For Bill, because he’s been in the game so long and has been such a great player and play a lot of rep footy under a lot of coaches, he probably wouldn’t need as long as most people as far as the apprenticeship goes.

“He starts in a different role with Origin this year, so it would be interesting to see how he goes with it and how he enjoys it.

“It will be something for Bill to decide, but I’m sure if he wants to go that way he will be a huge success.”

Bellamy said despite the working relationship he would have with his replacement, he would have no say in who takes on the day-to-day role at Melbourne, with the board making that call.

“That won’t be my choice,” Bellamy said.

“If the board wants my advice I’m sure they will ask, but that’s not part of my job description to appoint the new coach. That will be up to the board.”