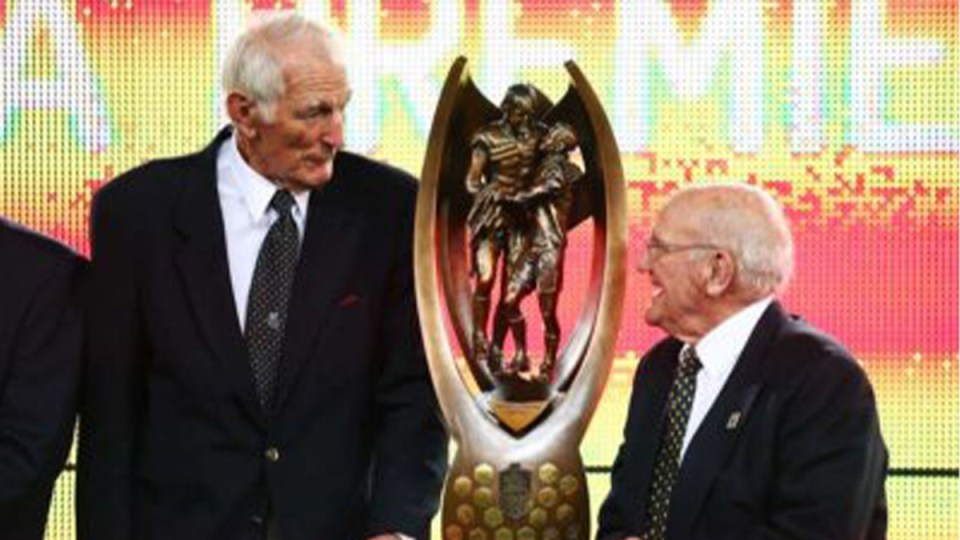 Norm Provan (left) and Arthur Summons with the NRL trophy that bears their names, at the 2013 grand final. Photo: Getty

One of the finest second-rowers in the history of the game, Provan won 10 premierships as part of St George’s in their golden era of 1956 to 1966.

His name still remains in the game – he features with Western Suburbs rival Arthur Summons in the famous image that adorns the NRL’s grand final trophy.

The decoration on the trophy is taken from a photograph of Provan, captain of St George, alongside Summons, covered in mud after the 1963 grand final. It was the inspiration for the current premiership trophy, which is named for both great players.

The Provan-Summons trophy was embroiled in controversy earlier this month, after the 2021 grand finalists, the Penrith Panthers, damaged it in a night of partying following their championship win.

The gladiators sculpture was found to be broken away from its base.

An NRL spokesman confirmed the league had asked the Panthers for an explanation.

After debuting for the Dragons in 1951, Provan played 256 games for the club, as well as 19 matches for NSW and 14 Tests for Australia.

He was named in Australian rugby league’s team of the century in 2008 and was elevated to immortal status in 2018.

Provan was unable to attend the ceremony because of his ailing health. Daughter was Sue McCloud there on his behalf.

“We’ve always looked up to dad. He’s always been immortal to us,” she said at the time.

“To have him receive this, especially now, means an awful lot to all of us – and to him.

Former colleagues and fans of Provan shared the impact he had on them, calling him a “true gentleman”.

Provan’s death comes after a tragic year for the sport, following the deaths of fellow immortal Bob Fulton and league legend Tommy Raudonikis.