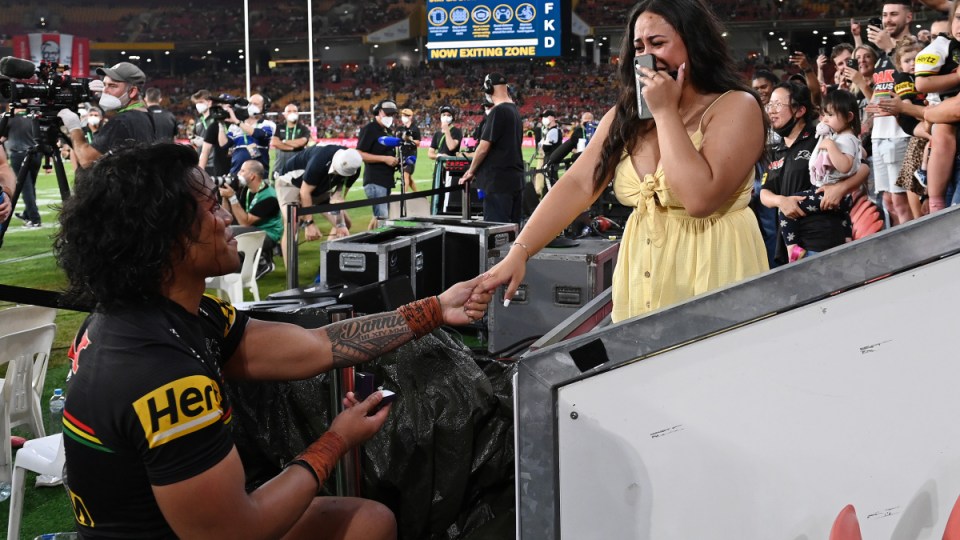 Penrith winger Brian To’o turned up to Suncorp Stadium with an engagement ring and left with a premiership ring following his grand final proposal.

Moments after the Panthers’ heart-stopping 14-12 win over South Sydney in Sunday’s premiership decider at Suncorp Stadium, To’o went to where his partner Moesha Crichton-Ropati was sitting in the crowd before getting on one knee and proposing.

In a double win for the NSW State of Origin star, a thrilled Ms Crichton-Ropati said yes and gleefully accepted the ring To’o proffered.

A beaming To’o turned to his teammates and mouthed “she said yes!”.

Later he said he had planned to ask the question, regardless of the game’s result.

“Pretty happy that I’ve got a ring and she does as well,” he said.

“I just told her she’s the best thing that’s ever happened to me then got down on one knee.

“I was planning to do it during Origin but due to COVID it didn’t happen, so made the next step to push for a grand final.”

Ms Cricthon-Ropati is a cousin of To’o’s teammate and grand final try-scoring hero Stephen Crichton, who helped him buy the ring.

“I thought that he was coming to give me a hug like he usually does,” she told the Nine Network.

“I wasn’t expecting that at all.”

To’o has often referred to the important role his partner has played in his career.

The 23-year-old defied an ongoing ankle issue to played a starring role in the Panthers’ victory, picking up a game-high 235 metres in a typically hard-running contribution.

To’o said the win and proposal capped a year he will never forget.

“Everyone was buying into it, to put their bodies on the line to get where they are today,” To’o said.

“Everyone was doubting us a little bit (after losing last year’s final) but we had no problem, took it as a positive thing.

“It makes it 10 times for more special for [coach[ Ivan [Cleary] … he treats us all the same, like his own son.”