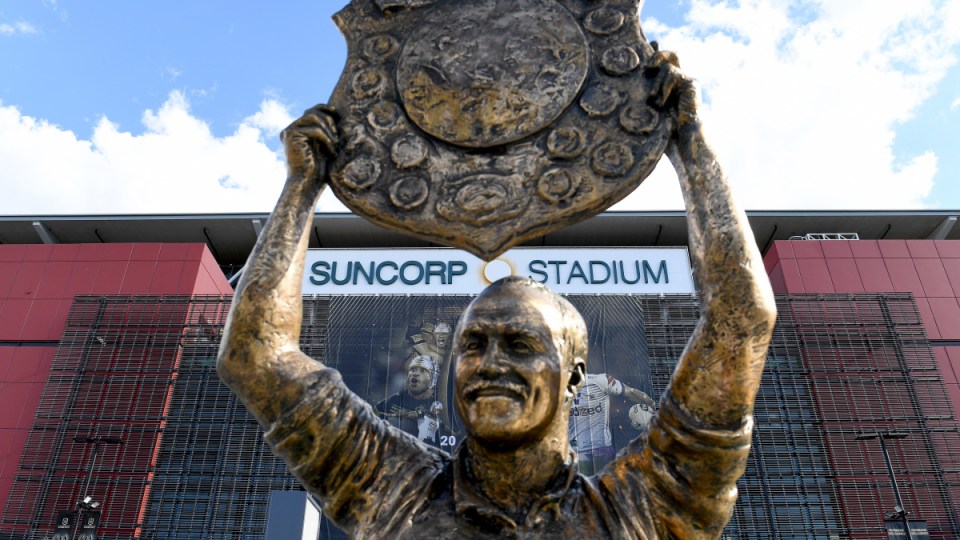 There were fears the grand final could be postponed due to a Qld outbreak. Photo: Getty

Barring an unforeseen blowout in Queensland COVID numbers to be released on Sunday, a weary Penrith will look to overcome a refreshed South Sydney in the NRL grand final.

After days of speculation – and just two new coronavirus cases in Queensland on Saturday – it is now extremely unlikely that the NRL will postpone Sunday night’s grand final in Brisbane.

“It’s all systems go now, the cases have dropped down and there’s a bit more confidence in the air, and we’re looking forward to having 39,000 people at the game,” Rabbitohs assistant coach Jason Demetriou said.

“It sounds like it’s going to be a great atmosphere and we’re looking forward to it,” he added.

Crowd numbers were cut from the original 52,000 people, and could still drop further, depending on Sunday’s numbers.

But the players involved will have other concerns come kickoff in what is expected to be a warm Queensland evening.

The Panthers will need to overcome a fortnight more gruelling than back-to-back State of Origins if they’re to redeem last season’s grand-final loss to Melbourne.

Official NRL data shows just how brutal their past two weeks have been.

Last Saturday’s win over Melbourne had almost 64 minutes of ball-in-play time, the third-highest figure of all games this season.

Only St George Illawarra’s round-16 win over the Warriors – aided by extra-time – and Penrith’s round-seven win over Newcastle had more. The match also had 327 play-the-balls and at one point went for more than six minutes without a stoppage under the Brisbane sun.

The Panthers’ semi-final win over Parramatta also had more than 61 minutes of ball-in-play time, with 335 play-the-balls, placing it seventh for this year in terms of active play.

All metrics show a higher intensity than State of Origin, where the average ball-in-play time was 56 minutes this year with 290 play-the-balls.

By contrast, South Sydney have had a comparatively cruisy run as a reward for beating Penrith in week one of the finals.

They enjoyed the second week of the finals off, before breezing past Manly in a game where the ball was only in play for 55 minutes.

“It could be (an issue),” Penrith legend Greg Alexander admitted. “It just depends on their mental approach. That was that big of a game.

“There could be a train of thought that that was such an emotional win and big build up (against Melbourne).

“They had to invest so much in that game to get the result. Are they exhausted mentally and physically?”

Penrith coach Ivan Cleary has repeatedly claimed his team is battle-hardened, but truth be told their tough streak has dated back to before Origin.

Since flogging the Rabbitohs in round 11 at Dubbo, no NRL team has been forced to make more tackles than Penrith’s 355 per game. They have also done it battling a number of injuries.

But as far as Alexander is concerned the pain of last year and young legs will be enough to overcome Sunday’s challenge.

“The bigger part of me thinks they have just got themselves where they wanted to,” Alexander said.

“They’ve earned the right to have another crack at what they didn’t get right last year.

“The excitement of being in a grand final and getting that chance again might override everything they are feeling.”

South Sydney meanwhile have been flying since Dubbo.

Often overlooked because of Tom Trbojevic’ brilliance and Melbourne’s winning streak, Souths have topped every attacking category since June.

Defensively, Souths have also missed the least tackles per game (22.4), with their pack conceding the fewest metres per set (37) in that time.

But after three straight preliminary finals losses, Souths are used to being underrated.

“It suits us to be undersold,” Wayne Bennett said recently.

“If you go and have a look at the stats it would be quite enlightening,” the former Brisbane coach said.

“People talk about the Roosters, Storm and Penrith being tremendous teams. But if you look at all the stats, South Sydney are one win either behind or ahead most those teams.”

On Sunday, they will get the chance to prove it with a title.

The pre-game entertainment gets underway from 5.30pm, with kickoff at 7.30pm.

You can watch the game free-to-air on Channel Nine and 9Now.