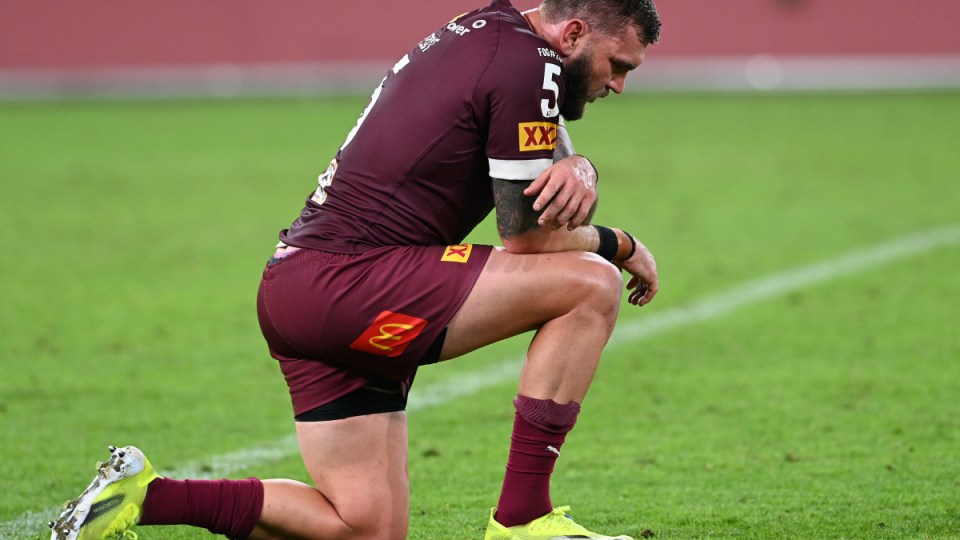 It's been two decades since Queensland left the Origin series with zero wins. Photo: Getty
analysis

It never rains, it pours. That’s how Queensland is feeling as the third and final State of Origin game of 2021 approaches.

Down 2-0 in the series, after one-sided defeats in game one and two, the Maroons are desperate to avoid an embarrassing whitewash.

It has been 21 long years since they lost a series 3-0; a painful experience they are keen not to repeat.

But once again the Maroons camp has been marred by injury, stupidity and a series of unfortunate events.

After two big losses the selection axe has been swung again, with coach Paul Green praying for some reversal in form.

Kalyn Ponga is back at fullback, while rookie Hamiso Tabuai-Fidow has been given the unenviable task of making his debut against New South Wales star Tom Trbojevic in the centres.

The toughest of tough assignments.

Andrew McCullough has been punted to make way for Ben Hunt at hooker, while Coen Hess and Kyle Feldt have also been cast aside. Debutants Kurt Mann and Thomas Flegler have been selected, with AJ Brimson giving the chance to impress from the bench.

It’s a side missing strike forward David Fifita to suspension, with injury again claiming both Harry Grant and Reed Mahoney.

But again before a ball has even been kicked, like in Game II with Ronaldo Mulitalo, major controversy has hit.

Lock Jai Arrow will miss the match after he brought a woman into the Queensland hotel, breaching biosecurity restrictions.

Arrow has received a two-game ban and a $35,000 fine, and his indiscretion sums up how disastrous this whole Origin series has been from start to finish for the Sunshine State.

Coach Green only further added to the farce by weakly avoiding the media, following the news of Arrow’s antics, and leaving his players to instead take the heat.

Then on Saturday, COVID-19 forced game three to be moved from Newcastle to Gold Coast, meaning all Origin matches this year will have been played on Queensland soil.

While normally this would have been an advantage, but considering how the Maroons were torn apart in Townsville and then dominated in Brisbane, it could be anything but.

Meanwhile, south of the Tweed and NSW is quietly going about its business. The Blues know a special slice of history is at stake.

They have injury issues of their own to contend with, with dynamic Penrith halves Nathan Cleary and Jarome Luai unavailable.

Parramatta player Mitchell Moses gets his chance at halfback, and will be paired with Jack Wighton.

Daniel Saifiti has also been ruled out, with Dale Finucane to take his place, and hooker Api Koroisau joins the bench.

The spate of withdrawals would appear to strengthen Queensland’s chances.

But looks can be deceiving.

NSW’s strike weapons of Trbojevic, James Tedesco, Latrell Mitchell and Josh Addo-Carr are all still there.

Hooker Damien Cook is still calling the shots at the back of the ruck, and the forward pack of Junior Paulo, Cam Murray, Tariq Sims, Isaah Yeo and Payne Haas remains.

Like Jaws at feeding time, the Blues can smell blood in the water. The Maroons are just waiting to be finished off.

Brad Fittler’s open and transparent style with the media, his quiet confidence and new-age approach to coaching is paying dividends.

NSW is a picture of cool and calm despite all the COVID interruptions.

For Queensland, coach Green is facing the sack.

So is captain Daly Cherry-Evans, if his team cops another beating.

The Maroons have a long tradition of beating the odds and being proud underdogs, but this year has been nothing but blue murder.

All eyes will be on the Gold Coast this Wednesday to see if there is still life in the culled canetoads, or whether the cockroaches will march on triumphantly once again.

Queensland feeling the blues as State of Origin reaches its climax