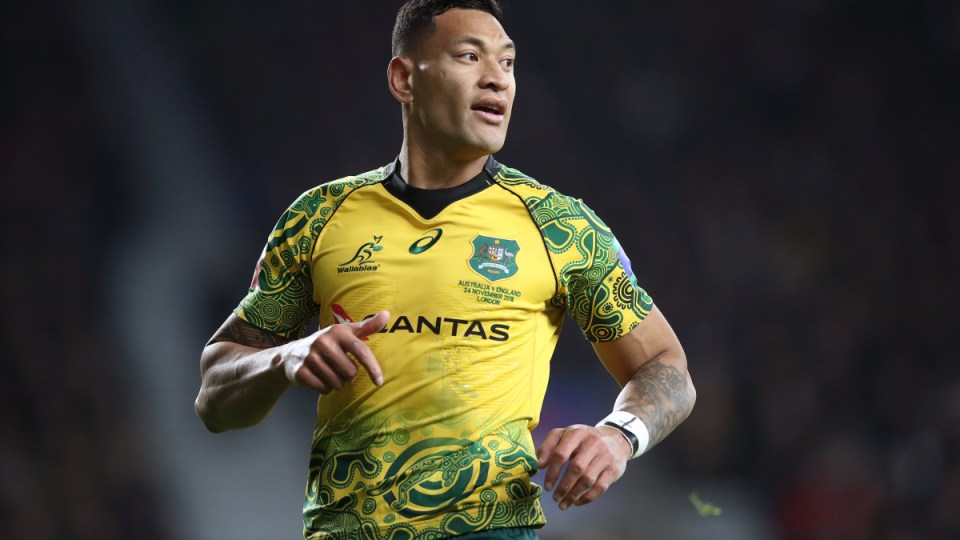 Israel Folau is returning to rugby union, signing to play for a Japanese club in 2022. Photo: Getty

Controversial former Australian rugby star Israel Folau has signed to play with a Japanese club in 2022 in a surprise move.

Folau, who was sacked by Rugby Australia in 2019 after posting homophobic comments on social media, was released from his contract with French rugby league club Catalans Dragons only last week.

The 32-year-old had been expected to play for rugby league for Gold Coast club Southport Tigers, with the backing of billionaire Clive Palmer. Queensland Rugby League confirmed his registration last week.

Instead, Japan Top League club NTT Communications Shining Arcs confirmed on Monday the dual-code international would line up in its competition from January.

Folau will reunite with sacked Waratahs coach Rob Penney in Ichikawa. His and Penney’s arrivals were announced by the Shining Arcs, along with the signings of Australians James Moore, Sam Jeffries and Brody MacAskill, as well as former Blues five-eighth Otere Black.

Folau had previously threatened legal action against the QRL after it refused to ratify his registration with the Tigers because he was still contracted to the Dragons.

“The QRL made clear from the outset that Folau would be registered upon completion of the registration process, including the obtaining of a release from his previous overseas club, as per the rules of the game which apply to all players,” the QRL said in a statement.

Folau continued to negotiate with the Super League club, which confirmed last week it had torn up his contract.

“Catalans Dragons can confirm Israel Folau will be released from the remainder of his contract with immediate effect,” a club statement read last week.

The deeply religious Folau was thrown a lifeline by the French club before the 2020 season, after being was sacked by Rugby Australia after repeated homophobic posts on social media. The club took him on in the face of opposition from rival Super League clubs and the governing body.

He played in 15 out of a possible 17 matches last season and agreed a contract extension to the end of 2021. The Dragons gave him permission to miss the start of this season so he could return to Australia for “pressing family matters”.

He was then courted by St George Illawarra and recently attempted to make a comeback with Southport, where his brothers play.

“Israel has been great with us in 2020, both on and off the field, and we wanted to facilitate the negotiations to reach an agreement,” Catalans chairman Bernard Guasch said.

“He told us his desire to play alongside his two brothers and we didn’t want to prevent him.”

The timing of the Japanese season – Folau isn’t due there until September – means he could still feature for the Tigers in 2021.

Folau played rugby league for Australia before switching to the AFL in 2011 and jumping codes once again to rugby union in 2013. He scored 37 tries in 73 Tests for the Wallabies.

Rugby Australia’s sacking of Folau sparked a lengthy court battle that was settled only when it made a multimillion-dollar out-of-court payment.