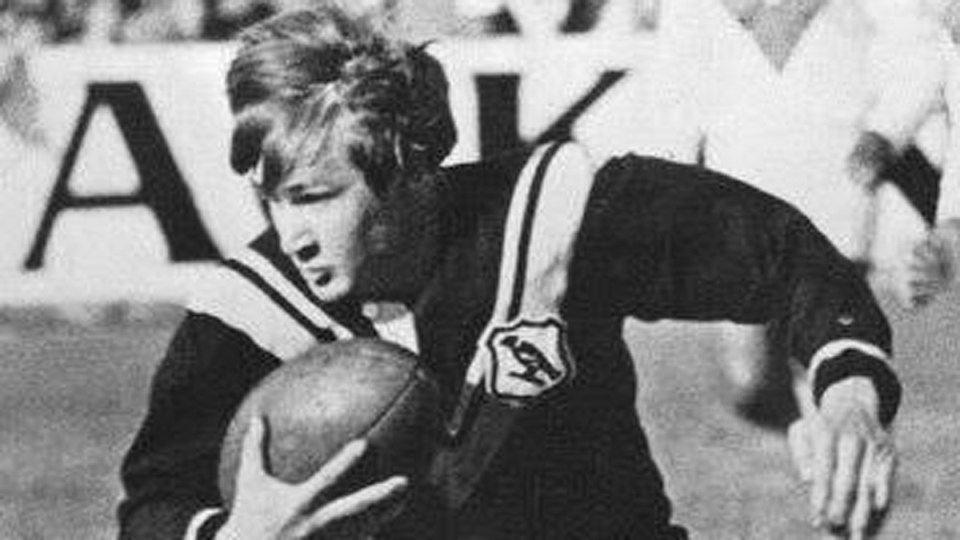 Tommy Raudonikis completely lacked political correctness, was habitually irreverent and unfailing in his honesty and compassion.

He was also one of the most-loved and best-performed figures of his era in rugby league, a game in which he was the model for toughness and commitment.

As a rival player once testified: “If he couldn’t beat ya, he’d belt ya.”

Which isn’t as bad as it might sound, because Raudonikis wasn’t often beaten.

Raudonikis, who has died aged 70, was “Tom Terrific”, a halfback who played like a front-rower, a rugged, uncompromising and brilliant footballer who lived his life just as he played and coached the game he professed to love “like a fat kid loves cake”.

Born in Bathurst, NSW, Raudonikis was the son of an immigrant Lithuanian father and a Swiss mother.

After beginning his senior football career at Cowra, he continued it at Wagga Wagga where he joined the RAAF as an engineering apprentice.

In 1969 he moved to Sydney and played the first of 201 games with Western Suburbs in the Sydney first division.

In almost every sense, Raudonikis was a perfect fit at Wests, a club whose working-class demographic was reflected in its nickname “the fibros”, and one with a long history of battling against adversity and producing no-nonsense players.

His time at Wests corresponded with one of the club’s greatest periods.

Although they didn’t manage a premiership, the Magpies of the Raudonikis era included John Dorahy, Les Boyd, John Donnelly and Graeme O’Grady.

Among such an illustrious group, Raudonikis was voted the league’s best and fairest for 1972 and awarded the Rothman’s Medal.

He won selection for NSW and Australia in 1971 and was an almost automatic choice as Blues and Kangaroos halfback for the next decade.

More recently, Raudonikis was inducted into the Wests Magpies’ Hall of Fame and was named one of Australian rugby league’s 100 greatest players.

After 11 seasons at Wests, nine of them as club captain, Raudonikis, reluctantly, moved to Newtown in 1980, playing 37 games over three seasons at the club.

After the Jets which included a grand final as captain in 1981, he went to Queensland where he was captain-coach of the Brothers club in Brisbane in 1983 and also coached at Norths in Brisbane and at Ipswich, returning to Sydney for two forgettable seasons as coach of his former club Wests.

His two-year spell as NSW State of Origin coach included a series win in 1997 in which his infamous “cattle dog” war cry – an instruction to his players to start a brawl – was born.

As notorious and celebrated as Raudonikis’s efforts at club level may have been, it was his role as a NSW representative, ‘Origin Original’ and Australian international that gave more illustrious definition to his football career.

Having played for NSW in the old interstate series for 10 years, Raudonikis captained the Blues in the inaugural State of Origin match in 1980.

That fixture was actually the third game of that year’s interstate series in which the state a player represented was determined by where he played club football, and had long resulted in lopsided NSW victories.

This time Queensland won 20-10 with Raudonikis, in his one-and-only Origin appearance, getting knocked out early and scoring a late try for the losers.

His recollection of the match was less-than-detailed, but typically erudite: “There was a blue, I went over to it ….. I went down like a bucket of s–t.”

Both his interstate and international careers ran from 1971 to 1980 and involved 24 games for NSW and 29 for Australia.

Reflecting on his finest moments in the green and gold, Raudonikis noted the only times in his career that he was sent off were on tours to England.

“I got sent off twice in England, but I should’ve got a medal because it was in Test matches and I took two Pommies with me,” he said.

The same attitude went with him when he embarked on a post-football media career highlighted by his ‘Raudonikis Report’ segment on the NRL Footy Show.

A “go-to” voice, particularly in discussion on questions of commitment and courage and the inevitable “in my day” comparisons, Raudonikis never held back.

A favourite was that players needed to “harden the f— up”.

“One thing I hate in sport is blokes not having a go,” he complained.

Raudonikis also had little time for the practise of players chatting and joking with their opponents after the full-time whistle.

“I hated the opposition like they’d done something wrong to the family,” he once said.

While irreverence and confrontation may have characterised the Raudonikis image, his long-term friend and former coach at Wests Roy Masters provided another insight into a man he loved and respected.

In 2017 when Raudonikis was found to have a cancerous tumour in his neck, Masters also one of Australia’s finest sporting journalists, wrote: “It should be no mystery why Tommy is universally loved.

“His twin defining characteristics are a searing honesty and a commitment to hard work. He is incapable of telling a lie.”

At the time of Raudonikis’s heart surgery, Masters observed: “Who could believe the very object that identified him would give him his biggest problem.

“At least the doctors will have plenty to work with.”