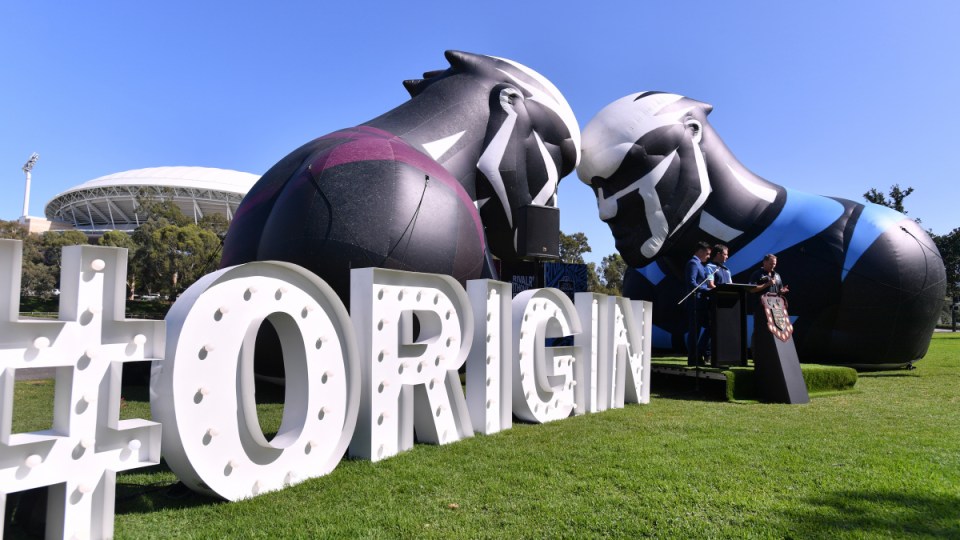 The State of Origin series, launched in Adelaide in February, kicks off on Wednesday night. Photo: AAP

Paul Vautin has backed Queensland’s unlikely bunch of State of Origin rookies to repeat the heroics of his 1995 side and pull off the biggest interstate boilover in 25 years.

Vautin, who coached a Queensland team shorn of several key players during the Super League split to a 3-0 series win, said the formula he used can apply to this year’s team when the series kicks off in Adelaide on Wednesday night (8.10pm AEDT).

The Bureau of Meteorology said there is a 60 per cent chance of rain and strong winds.

“You don’t have to be the best players to win Origin,” Vautin said.

“You don’t have to be the superstars. The fastest. The strongest.

“It comes from within and that’s what I got that team to believe in, to believe in themselves and each other.

“I don’t care how good NSW are or think they are.

“I’m confident that this Queensland team’s got the guts and intestinal fortitude to win.”

In 1995 Queensland had their backs against the wall. But they miraculously pulled off a series sweep.

Then Maroons coach Paul Vautin knows better than most that no matter how fancied the Blues are, "anything can happen" in #Origin. 😤https://t.co/JhgJr5UdKw #NRL #9WWOS

Chasing a third-straight Origin series victory, New South Wales is the overwhelming favourite, leaving the injury-hit Maroons as the biggest outsiders for an Origin game since 1998 and at the longest odds to win a series.

Queensland will field eight debutants, its most since Wayne Bennett picked 10 new faces for game one of its victorious 2001 series.

Blues coach Brad Fittler on Tuesday vowed not to underestimate the Maroons, pointing to his 2018 series win when he blooded 11 debutants in Game I.

“We had 11 players playing their first game two years ago, so I know exactly what it’s all about,” Fittler said.

“The one thing you know is they have very experienced coaches, so they know how to get a team working together.

“And they are going to be excited.”

The things that can go down in the #Origin arena 🤯

The Maroons’ depleted backline is under a further injury cloud, with debutants Brenko Lee (calf) and Kurt Capewell (groin) both battling niggles during Tuesday’s final training session at CbusSuper Stadium on the Gold Coast.

Losing either player will add further pressure to the Maroons, who are already missing incumbent backline stars Michael Morgan, Moses Mbye and Kalyn Ponga to injury and Valentine Holmes through suspension.

“It’s probably a little bit of an issue (experience), but it shouldn’t be too bad. They all play in the NRL and are used to playing against the players they’re playing tomorrow night,” Bennett said.

“They’ve got some experienced players around them – [Dale] Cherry-Evans and Cameron Munster – those guys are experienced. In the forwards we’ve got Jake Friend and Josh Papalii.

“I’m confident without being overconfident.”

#Origin has had some iconic combos over it’s 40 years 😋@AmpolAustralia and State of Origin is no different and on the eve of game one our new naming rights partner gets an insiders perspective on what the game means to players, legend and fans! 👏 pic.twitter.com/IaMJ2zuzpf

The Blues camp is far more settled, with Fittler spruiking the passion of debutant No.6 Luke Keary.

Despite queries over his eligibility to play for NSW, Keary had been as passionate as any about the Blues jumper, Fittler said.

“It was just a great chat to hear his side and the truth of when he moved and how he feels about State of Origin,” Fittler said.

“I don’t think anyone understood (his story). He moved as a young kid, but his parents are Queenslanders.

“They go for Queensland and he does still have relatives there.

“But he’s been in NSW for a lot longer than he was up in Queensland.

Under the conditions, eligibility is largely determined based on where players played and spent the majority of their childhood from age six to 18.

Keary first entered Origin calculations in 2017 but was overlooked by coach Laurie Daley.

The Sydney Roosters half was again unlucky to miss out in 2018 when Nathan Cleary returned from a knee injury, and in 2019 he looked a certainty only to have a concussion curtail his chances.

“Without a doubt if anyone deserves a run it’s him … He now gets a chance and has been incredibly impressive,” Fittler said.

“He handles training at high levels and just knows how to concentrate under pressure.

“I just can’t wait for him to get out there.”

Keary’s combination with Cleary will be crucial for NSW at the Adelaide Oval, with James Tedesco getting through Tuesday’s final session without issue on his knee.

Fittler’s squad was trimmed to 19 on Tuesday evening, with Cameron McInnes and Reagan Campbell-Gillard missing out.

State of Origin: Maroons tipped to upset Blues … against all odds