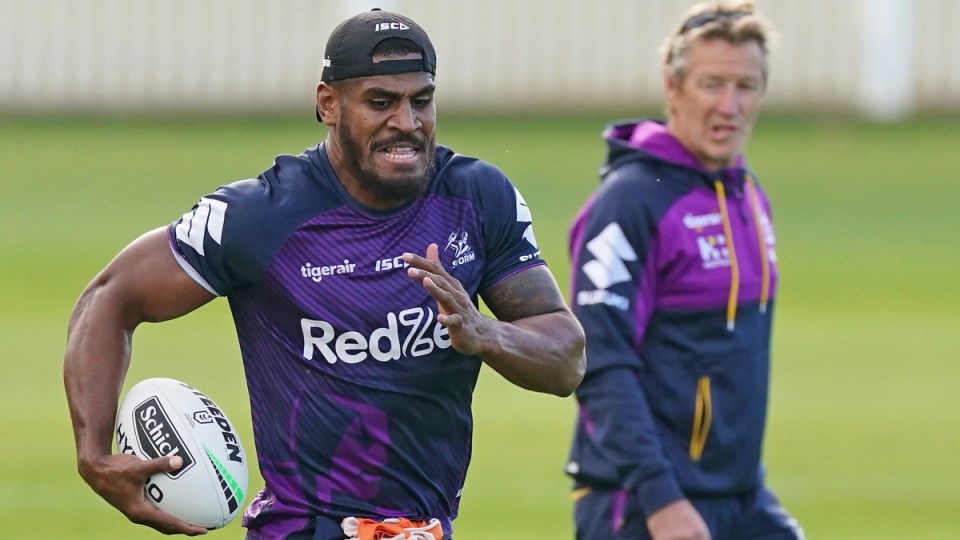 Melbourne coach Craig Bellamy will rely on a “gut feel ” in deciding whether to risk Tui Kamikamica in the NRL grand final despite the powerhouse prop not playing for almost a month and only featuring in five games for the season.

Kamikamica and utility back Nicho Hynes both ran with the side in their final training session in Queensland on Saturday before boarding a plane for Sydney ahead of their title clash with Penrith.

Hynes came off the bench in Melbourne’s preliminary final win over Canberra and would be considered unlucky to miss out should Bellamy opt for power over pace.

Neither have played in a grand final before, while Kamikamica played the first two rounds of the season but then missed most of the campaign after undergoing back surgery in June.

The Fiji-born monster, who stands 195cm and weighs in at 110kg, then injured his ankle in round 20, and also copped a one-match ban.

“Both guys trained this morning and Craig will make that decision himself,” said Storm assistant Ryan Hinchcliffe.

“Tui is coming back from an injury and hasn’t played for five weeks so there’s a little bit of risk in that, while Nicho has been coming off the bench for us.

“It’s a bit of a gut feel for him (Bellamy) – I can’t explain exactly but he talks to players in the team and people around whose input he values and then he goes with his gut.

“He will choose who he thinks is going to suit our team best.”

Melbourne players were unable to have a final training run at ANZ Stadium and had to settle for a walk around late on Saturday.

While relieved they did not have to travel on the match day as they had done through the season, and the Raiders had to do last week, Hinchcliffe said it was not ideal to miss a run-through.

“You’d prefer to have the opportunity but in saying that it’s been one of those years where things that you’d want to do you can’t, so it is what it is,” he said.

“We played Souths there in about round 17 so it wasn’t that long ago that we played on that field.

“The players will go to the field and have a look around and the enormity of the situation will sink in.”

Rain and cool conditions have been forecast as well as a heavy track, in contrast to the hard, fast fields at their adopted ‘home’ of Sunshine Coast Stadium and Suncorp Stadium.

“There will be some adjusting to the conditions, there’s no doubt about that,” said Hincliffe, who was part of Melbourne’s grand final wins in 2009 and 2012.

“We will have to tweak a few things with what we do when we’ve got the ball but we’ve got a style of footy we think can hold up in dry and wet.

“It’s more around decision making with your passing and catching, and being selective with not putting your teammates under too much pressure.

“The conditions will play a part and the team that adapts to the conditions of the game, will go a long way to getting the result they want.”