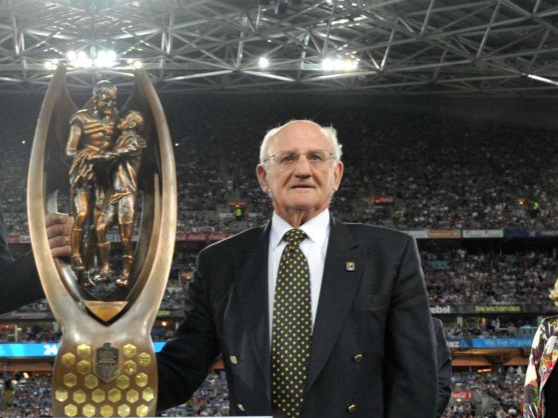 Arthur Summons, shown here in 1963 with the trophy he inspired, passed away at the age of 84.

Arthur Summons was never too bothered that he would be remembered better as a mud-covered figure in a famous photograph than as the very good rugby league player he undoubtedly was.

In fact, he quite liked the idea.

Summons, who has died aged 84 had a celebrated football career representing Australia in rugby union and captaining and coaching his country in rugby league.

He is listed among the 100 greatest players of last century, was a member of the first Australian rugby league team to win the Ashes in Great Britain and will always be remembered as one the best to have played the game during a golden era at Sydney club Western Suburbs.

Summons, of course, is also the short bloke in that wonderful, muddy portrait of he and rival captain Norm Provan at the end of the 1963 Sydney rugby league grand final between St George and Western Suburbs at the SCG.

It is an image so evocative that it is has been reproduced as a sculpture awarded each year to Australia’s rugby league premiers and is held, under its official name of The Gladiators in the collection of the National Portrait Gallery.

And the story behind it may well be more myth than fact.

Arthur James Summons was born in Paddington, NSW, on December 13, 1935.

He attended Homebush Boys High School, captaining their First XV and winning selection in the Combined High Schools rugby union team.
Summons also played for Gordon in the Sydney grade competition and at the age of 21 he played his first international for the Wallabies against South Africa.

Like so many players of that amateur era of rugby, Summons found it impossible to give up so much time without reward, and after earning 10 Wallaby caps, he switched to rugby league, signing with Sydney club Western Suburbs in 1960.

The same skills that had earned him Wallaby selection soon won the halfback a place in the Kangaroo squad to tour New Zealand in 1961 and so began a long and successful career as a player, captain and coach of Australia.

As captain-coach of the Kangaroos in 1963, Summons led Australia to its first series on British soil.

Summons played five seasons at Wests before finishing his playing career with three seasons with the Wagga Magpies, during which time he also represented Country against City.

It was in the last of them, in 1963, that the moment that was to characterise Summons’ sporting life was captured by Sydney Sun-Herald photographer John O’Gready.

In a torrid duel played on a quagmire at the SCG, St George won 8-3 and as the players were leaving the ground O’Gready snapped his momentous shot.

Wests Tigers would like to extend their condolences to the family of Arthur Summons following his passing last night.

The pose in which Summons, covered from head to toe in SCG mud, is looking up at Provan as the two players embrace has mostly been regarded as a symbol of Australian mateship.

An alternative story later emerged which maintains that Summons was going crook about the referee who had been rumoured to have had a big bet on St George.

It is also said that Summons wanted to swap jerseys with Provan, who refused.

The NSWRL re-staged the pose at the SCG in 2013 when they announced the sculpture depicting the two men would be known as the Provan-Summons Trophy and be awarded to the premiers.

“It’s surreal, what happened from that photo being taken,” Summons said at the time.

“Images being used for the premiership trophy … it’s beyond my ability to explain it.

“The mud helped make it – we look like statues, and a statue they made from it.

“We’re epitomised for as long as they play for that trophy. We’ll be long gone and they’ll still be playing for it because it is rugby league.”

On the two stories behind the pose, neither player has elaborated.
But they remained close friends.

“I’ve been blessed in life to have an association and a friendship with Norm,” Summons said.