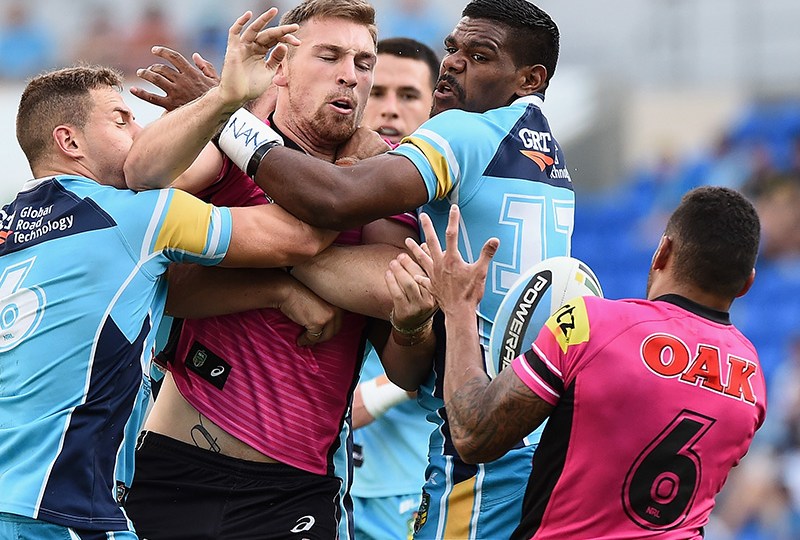 After Prime Minister Scott Morrison called for a “no jab, no play” stance on NRL anti-vaxxers, ARL Commission chairman Peter V’landys is set to enter talks with the RLPA to encourage players to agree to flu shots before the May 28 restart.

Gold Coast star Bryce Cartwright has polarised the rugby league community after it emerged he refused the vaccination, which is part of the strict biosecurity protocols to restart the NRL competition next month.

High-profile anti-vaxxer Cartwright has copped criticism for his stance, with even the Prime Minister weighing in on Wednesday.

“When I was social services minister I started the ‘no jab, no play’ rule into the childcare facilities,” Morrison told 2GB radio.

“And I think the same rule applies there – no jab, no play.”

But RLPA player director Dale Copley has revealed “several” players have also rejected vaccination after throwing his support behind Cartwright and taking a swipe at Mr Morrison.

It has prompted V’landys to plan talks with the RLPA players’ union and stress the importance of players getting a shot.

“We are awaiting advice from management and our biosecurity people before we move forward on what we will do,” he told News Corp.

“This is a process with the Rugby League Players’ Association and we need some solid consultation with them before we take any steps.

We want them to have flu shots because it minimises risk to the game and the player. This is part of protocols and we expect players to follow them.

“We are meant to be all in this together. I’ve given the RLPA an undertaking that we will always work with them first to see if a solution can be found.”

Cartwright has signed a waiver to train with the Titans but must explain his actions to NRL chief medical officer Paul Bloomfield.

An NRL spokesperson said players who refused to receive the shot would be dealt with on a case-by-case basis amid consultation with club and NRL medical staff.

Reports claimed Cartwright faced a ban, but the NRL spokesperson refused to speculate on possible penalties.

Copley on Wednesday backed Cartwright, claiming his Titans teammate was not the only player to take the stance while also taking aim at Mr Morrison.

“I certainly throw my support behind Bryce. I think ScoMo has got his political parties a bit mixed up,” he said.

“The Coalition is the one who is supposed to try and fight for our freedoms.

“Look, it’s a crazy issue. It is very divisive, (but) I have always been a supporter of freedom of choice and not encroaching on personal liberties.

“I am more than happy for Bryce to make his own decision in that regard.

“I think that is pretty important to note that he isn’t the only one in the NRL who said he wouldn’t have it … probably the media blew it out of proportion compared to what it was.”

“But ultimately the proof is in the pudding. Our kids are a picture of health.”

Peter V’Landys negotiating with NRL players over PM’s ‘no jab, no play’ ruling