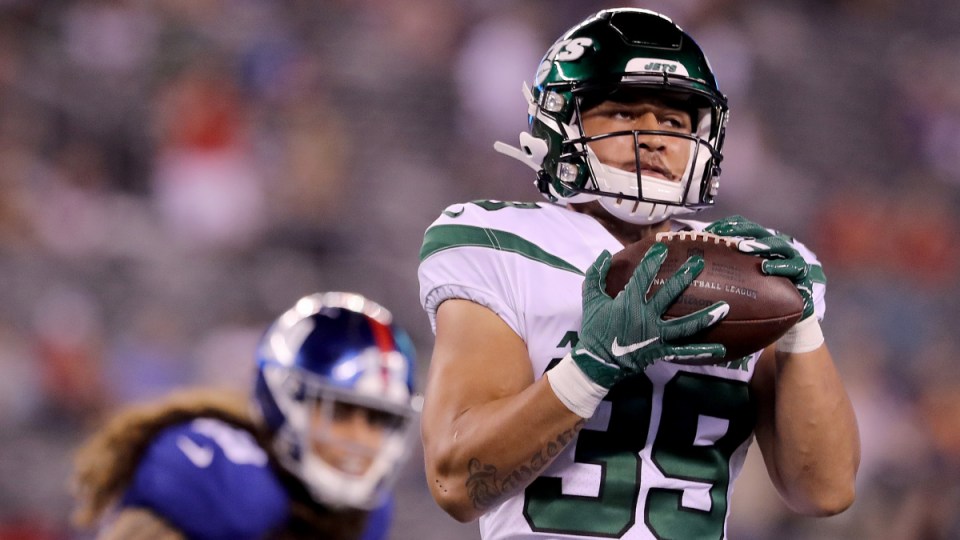 Valentine Holmes playing with the Jets in August. Photo: Getty

Valentine Holmes will return to the NRL in 2020 after signing with North Queensland on a six-season deal.

The Cowboys wasted no time snapping up the former Cronulla flyer, inking a deal until the end of the 2025 season barely 24 hours after Holmes was officially released by NFL franchise the New York Jets.

Townsville-born Holmes, 24, is tipped to don the No.1 jersey for North Queensland after signing the lucrative long term deal, reportedly worth almost $1 million a season.

While known for his prowess on the wing, Holmes played the majority of games in his last NRL season in 2018 at fullback for the Sharks, scoring 22 tries in 26 games with a league leading 26 line-breaks.

“This is a wonderful signing for our club,” Cowboys director of football Peter Parr said in a statement.

Val’s record speaks for itself and we couldn’t be more excited about securing him at the Cowboys for the next six seasons.”

North Queensland had spoken to Latrell Mitchell, hosting the Sydney Roosters X-factor on a tour of their facilities just last week.

But Holmes has been a long term target for the Cowboys who are believed to have set aside salary cap space for almost 12 months with the aim of luring the try machine back to his hometown.

Now Holmes has finally put pen to paper, North Queensland will hope the 2016 NRL premiership winner with Cronulla sparks their backline and breaks them out of a slump.

Holmes will provide much needed firepower for a North Queensland side that finished third last in 2019, ensuring the former premiers have missed the finals the past two seasons.

He has scored eight tries in five State of Origin games for Queensland and a remarkable 17 tries in 13 Tests for Australia.

Overall Holmes has scored 66 tries in 105 NRL games since his 2014 NRL debut with Cronulla.

“It wasn’t long ago that Valentine was one of the best players in the competition before his courageous decision to go to the NFL,” Parr said.

“His form in 2018 was as good as any player in the NRL, particularly in the second half of that season.

“He’s a proven big game player. He’s won a grand final and he’s played some terrific football for both Queensland and Australia.”

The cashed up deal will no doubt ease Holmes’ disappointment over his failed NFL experiment.

The 24-year-old left the Sharks at the end of 2018 to pursue his NFL dream and spent this year in the Jets’ practice squad as an International Pathways Player.

He played in the Jets’ four pre-season games but missed out on their 53-strong player roster.

Walters is under pressure after NSW won the last two Origin series.

Holmes has a stunning try scoring record on the wing for the Maroons but may yet threaten incumbent Queensland No.1 Kalyn Ponga for the fullback role in 2020.

The Cowboys are yet to confirm when Holmes will start pre-season training but will officially unveil their prized recruit at a Townsville press conference at 12 noon AEDT on Monday.