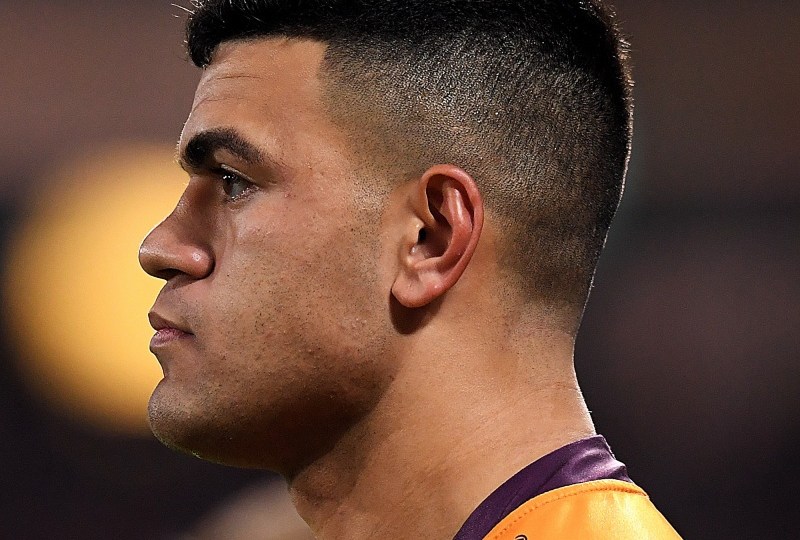 David Fifita says he's learnt from his ordeal in Bali after his release from jail for allegedly assaulting a security guard. Photo: AAP

David Fifita says he’s “learnt a big lesson” after arriving safely in Brisbane after three days in a Bali jail.

The Brisbane NRL star touched down in Brisbane early on Tuesday to be greeted by mother Gwen and club CEO Paul White before giving a short statement to the media.

With Fifita facing more than two years in jail for assault, White confirmed the 19-year-old had to pay compensation out of his own pocket to reach a “peace settlement” with the complainant – a security guard he allegedly punched early on Saturday morning.

Fifita was arrested after the alleged incident, forcing the club’s welfare officer Adam Walsh to fly to Bali to work with Fifita’s lawyers, Kuta police and the security guard to have the complaint dropped.

“I’d like to thank everyone who has worked to help me get home,” Fifita said.

“I’d like to thank Walshy, Payne (Haas, who he had travelled with) and my lawyers in Bali and everyone at the Brisbane Broncos.

“There has been a lot going on behind the scenes and I am really grateful for that.

“It’s a great feeling to be home to see my family.

“I’ve learnt a big lesson from what I’ve been through these last few days.”

Confirming the club did not pay compensation to facilitate Fifita’s release, White said the teenager’s version of events would come out once the integrity unit interviewed him.

“Any compensation that was paid was agreed upon David’s legal representative over there and David himself,” White said.

“That is something between David and the alleged victim.

“I look forward to the integrity unit being able to speak to Dave and take his version of events and make an independent judgement.”

Fifita is entering the final year of his Brisbane contract and, attracting interest from a number of clubs, is expected to fetch offers in the region of $1 million a season.

Regardless, White conceded Fifita had made a poor decision putting himself in the party destination’s nightclub precinct in the early hours.

“You’re always disappointed; we work really hard with our players.

“David is a good young man and he’s going to learn a very big lesson from what he’s gone through over the last three days.”

White said the club would allow the integrity unit to conduct its investigation and, while not ruling out a separate club sanction, indicated Fifita’s “harrowing” ordeal may be punishment enough.

“I don’t know too many 19-year-old men … of his background, who have had an experience like that,” he said.

“I know, having a policing background, that being in a cell is not a great experience, and being in one in a foreign country was pretty confronting.

‘I am not afraid’: The modern unknown soldier risks it all in Ukraine
Energy market reform will be a big boost for emissions reductions: Chris Bowen
Greens sign up for Labor’s looming jobs-and-skills summit as Liberals stick with boycott
Joe Biden’s $430b green victory for the environment
China cementing its Thailand ties with joint military exercises
NRL: Titans frantic to end 10-game losing streak as Manly showdown looms
NRL: Fifita’s lawyer says Bali arrest ‘a misunderstanding that he can’t remember’
Today's Stories