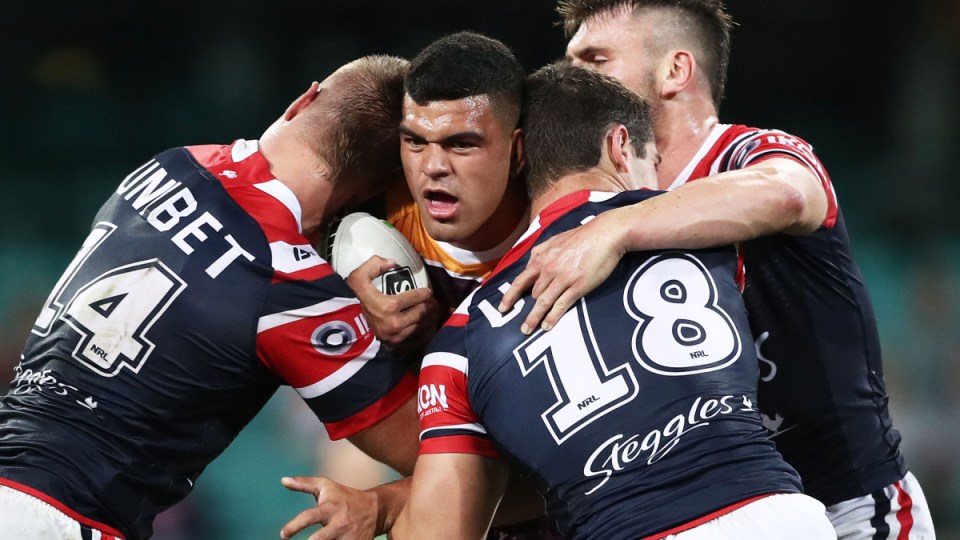 David Fifita’s lawyer says the NRL star “doesn’t remember” hitting a security guard and is confident the issue can be quickly resolved.

An out-of-court settlement appears Fifita’s best chance of being freed from a Bali jail after the NRL star was detained for allegedly striking a security guard outside a nightclub in Seminyak.

The bouncer who accused Fifita of hitting him early on Saturday morning has reportedly forgiven the 19-year-old and accepted his apology.

Brisbane Broncos welfare officer Adam Walsh has flown to Bail and is continuing to work with local representatives to help resolve the issue.

“David is respectful of Indonesian law and is cooperating with local authorities,” the Broncos said in a statement issued on Sunday night.

“The Broncos are also working with the NRL integrity unit on the issue.

“The club will provide more updates as information becomes available.”

Fifita remains in a Kuta jail cell after being arrested following the alleged incident outside the same nightspot at which Melbourne Storm’s Nelson Asofa-Solomona landed himself in trouble last month.

Fifita’s lawyer says the teenage forward “doesn’t remember” hitting the security guard and is confident the issue can be quickly resolved.

Bali bouncer Dani Irawan indicated he would be willing to forgive Fifita.

But first he wants to speak with Fifita again to ensure he is truly remorseful. It’s understood there are plans for Irawan to meet with Fifita’s lawyers as early as Monday.

Dani said he wasn’t seeking compensation and was prepared to sign a so-called “peace agreement”, which shaped as Fifita’s best hope of being released.

Dani said he was shocked when Fifita, who was leaving the La Favela nightclub on a motorbike taxi, allegedly punched him on the right cheek.

He also alleged that Fifita tried to jump from the motorbike to punch him again but was prevented from doing so by the bike rider.

That was when he decided to report Fifita to police.

“I just don’t like to see arrogant tourists. We should give him a lesson,” he said.

Fifita was in Bali holidaying with Broncos teammate Payne Haas.

“It’s only some misunderstanding and that we hope we can solve immediately,” Rifan said.

He doesn’t remember because it was too quick and fast. Maybe something like that (is a) misunderstanding.”

A police report obtained by the Seven Network said Fifita was not initially able to be interrogated because he was under the influence of alcohol.

The incident took place at the same nightspot where Asofa-Solomona was involved in a wild brawl, which resulted in a three-game ban and a suspended $15,000 fine, and comes a fortnight after Fifita captained a Junior Kangaroos team to a win over France in Wollongong.

Fifita is set to enter the final year of his NRL contract with Brisbane, and is widely considered the hottest free agent available for the 2021 season.

He has been linked with a number of NRL clubs, including South Sydney.

A Bali police report outlined the case against the NRL star.

“The perpetrator jumped from the motorbike and tried to approach the victim, but was prevented by ojek driver,” the police report reads.

“The victim felt pain in his face and made a report at Kuta police station.

“Based on report, police went to the crime scene, asking witnesses and the victim. A bule (foreigner) that was allegedly the perpetrator was arrested.

“The perpetrator was taken to Kuta police station for further investigation.

“The alleged perpetrator could not be interrogated yet as he is still under the influence of alcohol.”

“So the alleged perpetrator was nabbed straight away and taken to the police station,” Kuta police chief Teuku Ricki Fadlianshah told the Seven Network.

“Witnesses said that he hit La Favela’s security. An ojek driver tried to separate them and he tried to hit the security again.

“It is still being investigated. Based on witnesses, the perpetrator spontaneously hit the security without any reason. But we are still facing difficulties to interrogate him.”

‘I am not afraid’: The modern unknown soldier risks it all in Ukraine
Energy market reform will be a big boost for emissions reductions: Chris Bowen
Greens sign up for Labor’s looming jobs-and-skills summit as Liberals stick with boycott
Joe Biden’s $430b green victory for the environment
China cementing its Thailand ties with joint military exercises
NRL: Titans frantic to end 10-game losing streak as Manly showdown looms
Broncos’ David Fifita arrested after Bali biffo with nightclub doorman
Today's Stories