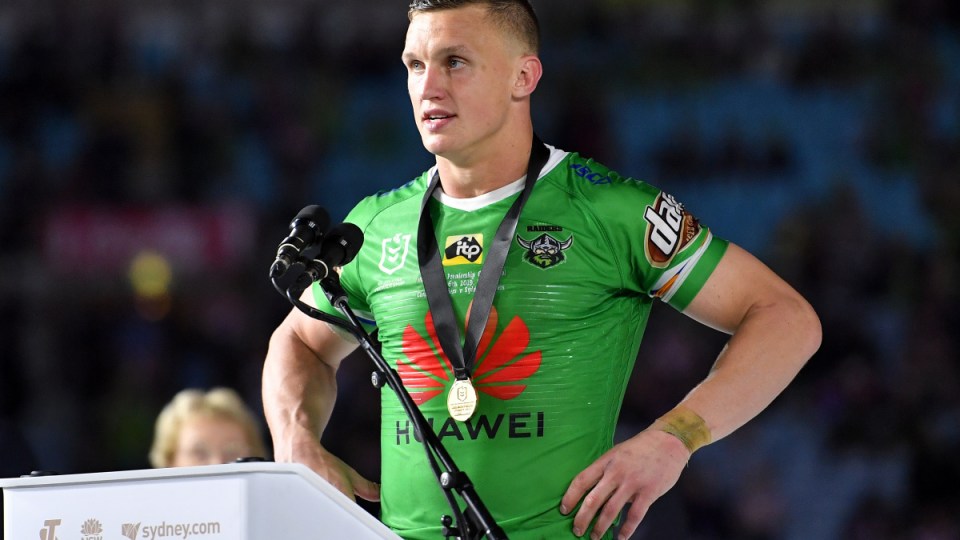 Canberra's Churchill medallist Jack Wighton was in strife off-field in 2018, but turned it around in 2019. Photo: AAP

A technical error on the NRL’s voting app prompted confusion over the Clive Churchill medal with Jared Waerea-Hargreaves incorrectly told in private he had won the award.

Waerea-Hargreaves was told by an unknown official before the post-match presentation he was going to be named player of the match for the grand final.

The Sydney Roosters prop was positioned next to the stage to be called up before Canberra’s Jack Wighton’s name was read out to collect the award.

The NRL went to lengths on Monday to insist the right player had won the award after the Roosters’ 14-8 win.

“There was a process, the process was going on, the person who won frankly was the one who should have won,” ARL Commission chairman Peter Beattie said.

“The vote was being counted, there were some people who thought they knew what was going on who didn’t. That’s the bottom line.

“When all the votes were counted Jack won. That’s it.”

Under the NRL’s system, Kangaroos selectors Laurie Daley, Darren Lockyer and coach Mal Meninga each vote on a 3-2-1 basis for the player of the match.

It’s understood Waerea-Hargreaves had led the count when Raiders legends Daley and Meninga entered their votes, but Lockyer was unable to log on to the application.

He then had to deliver his votes verbally to officials and it’s understood it’s during that time the mix-up occurred.

“We all thought Jared was getting it,” Roosters five-eighth Keary said.

“I thought Jared, Boyd (Cordner), Toops (Daniel Tupou) or Teddy (James Tedesco could have won it).

“But I thought Jack was outstanding.”

A big congratulations to Jack Wighton on taking out the Clive Churchill Medal!#NRLGF pic.twitter.com/L3MrlQw5vH

Wighton was subsequently booed onto the stage by Roosters fans, prompting Raiders coach Ricky Stuart to label them “wombats”.