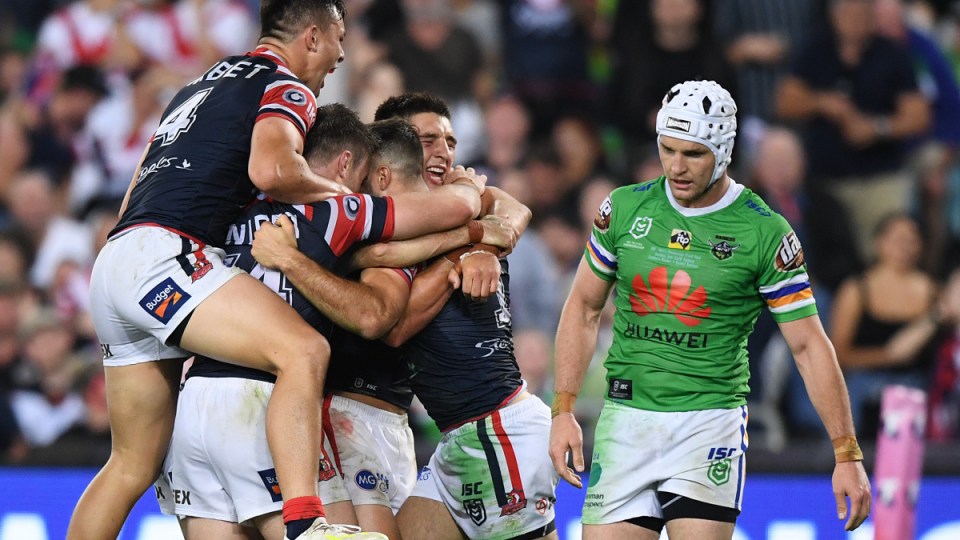 Sydney Roosters’ renowned defence has held out the Canberra Raiders to win the NRL grand final 14-8, becoming the first team since 1992-93 to win back to back premierships.

The Roosters played 10 minutes of the second half without veteran Cooper Cronk, who was sin binned for a professional foul.

The Raiders had the momentum for much of the last quarter, but were blindsided by official Ben Cummins waving for six more tackles, but then changing his mind.

The Roosters immediately broke away in the next set of six tackles, with Roosters fullback James Tedesco scoring the match-winning try by finishing off a 60-metre movement in front of a crowd of 82,982 fans at ANZ Stadium.

Tedesco said the premiership had been set up by his teammates’ strong defence.

“Everything was against us, Cooper getting sent to the bin, his last game, we were just under the pump the whole second half.

“It is just the culture. We’ve got a winning culture, the boys never give up. Fought for the whole 80 … At the end there? Just defend our line as best we can.

“That is our whole year, our best performance, and we wanted to keep them to as low points as possible. We defended our heart out that second half.”

Canberra’s Jack Wighton won the Clive Churchill Medal for best afield, although he was booed while on the dais by the pro-Roosters crowd.

Earlier, the Roosters called up their undercooked co-captain Jake Friend, but it was youngster Sam Verrills who drew first blood.

Verrills had been the man thought most likely to drop out of the side, but ultimately his grand final debut hit top gear when he made the most of being unmarked at the back to cross the tryline after only six minutes.

After 10 minutes the Roosters were dominating play, with the score at 6-0, adding a penalty goal 10 minutes later to be 8-0.

But Canberra kept coming, with Wighton getting over the tryline at the 30-minute mark, with the conversion bringing the score back to 8-6.

It stayed that way until half-time.

The Rosters had some injury worries, with backrower Mitchell Aubusson helped off to the rooms.

After half-time the tight play continued, until Cronk was sin binned for a professional foul, with the resulting penalty kick tying the game at 8-8.

Canberra had been unlucky early, with a bizarre incident during its second set at ANZ Stadium.

A kick by Roosters five-eighth Luke Keary was charged down by Raiders prop Sia Soliola but the rebound hit a trainer, who was behind the play.

Canberra’s Elliott Whitehead was racing to collect the ball but as the ball hit the trainer play stopped and as the attacking team, the Roosters got the scrum feed and another set.

According to the NRL rules: “Where play is irregularly affected in the field of play, the referee shall restart play with a scrum with the attacking team to receive the loose head and feed.”

While within the rules, veteran Nine commentator Phil Gould said the Raiders were hard done by.

“That could’ve been a try under the posts,” Gould said.

The Roosters forced a goal-line dropout and in the next set young hooker Verrills dived across the line next to the posts.

Veteran hooker Friend had played only five games this season, but has the experience of six grand finals to draw on.

Friend has had a disrupted season with a fractured arm and a calf injury putting him in doubt for a grand final call-up. Zane Tetevano is out of the side.

The Raiders fielded the 17-man line-up they named earlier in the week, with John Bateman and Josh Hodgson overcoming viruses and Joey Leilua a calf complaint.

An hour before the match, Roosters skipper Boyd Cordner said he would welcome Friend helping him with leadership duties on field.

“[We] sort of knew early on he had to sort of get through the week at training first. Every session was crucial for him. But he nailed his week and, yeah, it is good having that experience with Friendy coming in the team,” Cordner told Channel Nine.

“Leadership, just his composure, too, around the middle of the ruck. He gets his hands on the ball. All the time, he is probably the player on the field that touches the ball the most.

Raiders skipper Jarrod Croker said his team was ready for the challenge having done all they could to prepare for the journey to Sydney.