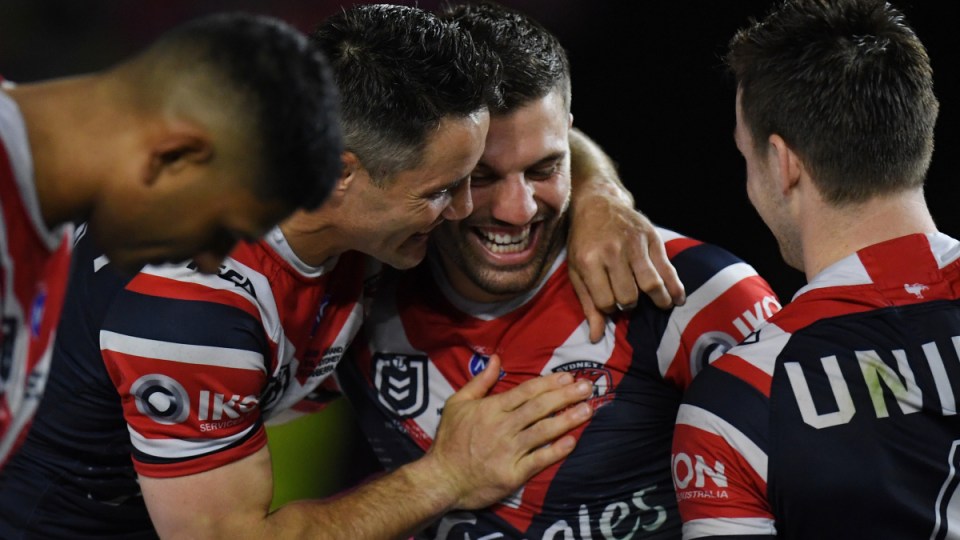 In the elation of the Roosters 14-8 NRL grand final win in Sydney on Sunday night, Cronk told his former Melbourne Storm teammate Billy Slater that he had benefitted from being involved with some quality teams.

“All I can say is … I’ve been fortunate enough to play with some guys like yourself that changed the way rugby league was played and I just jumped on the back of that and had some fun along the way,” Cronk said as he called time on his 16-year, 372-game career

Cronk finished his career with victory in his ninth grand final – equalling Ron Coote and Eddie Lumsden for third-most appearances in a decider.

He also became the first player since a host of Parramatta greats, including Peter Sterling and Brett Kenny in 1981 to 1983, to win three straight titles.

His achievement was acknowledged after the match by co-captain Boyd Cordner, who said Cronk had been a big part of forging a winning culture at the Roosters.

“Mate, what a career you’ve had,” Cordner said.

“We’ve been blessed to have you here at the Sydney Roosters.

“What you have done for this team, for this club, mate, will never be forgotten.”

Cronk’s imminent retirement was a key storyline of the 2019 decider, but there was one final twist when he was sinbinned for 10 minutes after being called for a professional foul.

The only dent the Raiders made on the scoreboard with Cronk off the field was a Jarrod Croker penalty goal, which evened up the scores.

Even so, Canberra looked to have all the momentum, but Cronk’s return ushered in yet another huge and controversial moment.

With the Raiders pressing for a winner, referee Ben Cummins looked to have granted a repeat set when James Tedesco failed to reel in a Jack Wighton bomb.

Cummins waved his arms in the air to signal six again but, when Wighton was tackled with the ball, the officials ruled a turnover.

In the next set the Roosters’ Luke Keary exploded down the blind side, with Latrell Mitchell producing a flick pass to give Daniel Tupou an explosive run, ending with Tedesco scoring between the posts.

The win made the Roosters the first team to record back-to-back premierships in 26 years and came off the back of a season of ups and downs, but where their defence held strong.

“We showed heart and character and stuck in there and we grabbed our opportunity and we held on in the end,” said Cordner.

“I’m so overwhelmed and excited. We’re just going to enjoy this and ride it out as long as it goes. It’s an amazing achievement.”

The referees were influential for the entire 80 minutes after the Roosters took first points in controversial circumstances after Sam Verrills dived over.

The Roosters were gifted prime field position after an Elliott Whitehead charge-down cannoned into Roosters trainer Travis Touma and they were given a scrum feed.

Under NRL rules, if play is “irregularly affected”, the referee awards a scrum feed to the attacking side and Verrills soon dived over.

While the rule was widely criticised, the Raiders remained in touch at 8-6 after Clive Churchill Medal winner Wighton stepped off his left foot to bamboozle Cordner.

But the Roosters showed their trademark grit and flair to hold on as they recorded their third premiership under coach Trent Robinson.

Canberra coach Ricky Stuart would not comment on the refereeing after the match, batting off several questions about it.

“Mate, you all saw it. None of us here will be commenting on that tonight. It’s not the time to talk about it,” he said in his post-match media conference.

You know, the Roosters achieved something very special tonight in winning two grand finals in a row. I don’t want to take the spotlight off that.

Asked if he could comment on the play that led the Roosters to score the winner, Stuart said: “Well, instead of me tomorrow saying what I think and then getting abused by everybody in regards to my unsportsmanship manner, you write what you think.

When a reporter answered “we all think they got it wrong”, the coach replied “OK, well, write it.”