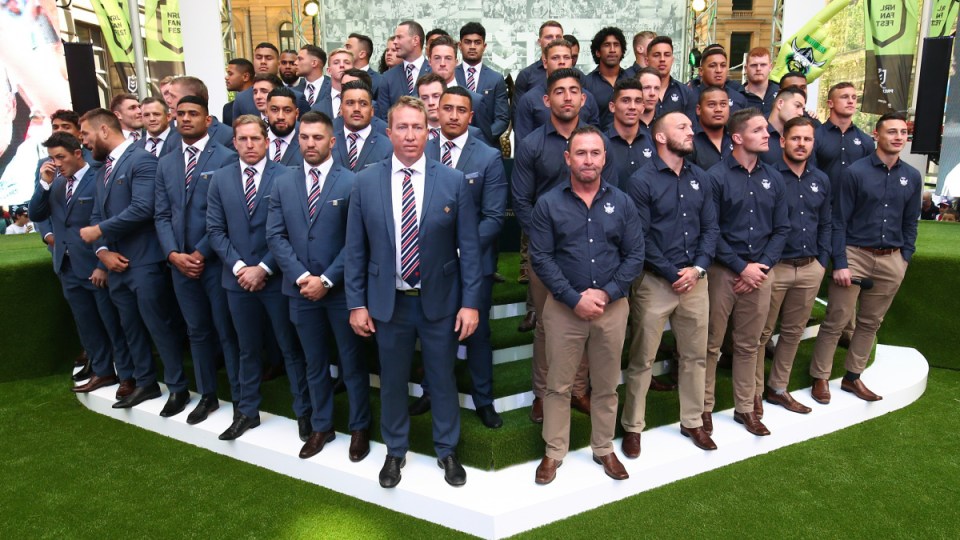 The Raiders and the Roosters line up ahead of Sunday's NRL grand final. Photo: Getty

Canberra premiership prop Glenn Lazarus thinks the Raiders have a similar look to the 1989 heroes, but the legend is getting no support from the present-day Roosters who think they can keep a clean-sheet on Sunday.

After a strong defensive record this year, Roosters’ forward Sio Siua Taukeiaho says his team’s brick wall is aiming to keep the Raiders scoreless, with the backs
conceding just 32 points in their past five finals.

Lazarus knows all about breaking the lines, being a part of the Raiders’ first flag  30 years ago when upsetting the Balmain Tigers in what many consider the greatest grand final ever played.

Lazarus packed down in the front row alongside Steve Walters, and they were just two household names in the star-studded Canberra side.

The 1989 premiers were, or became, a who’s who of rugby league, with Mal Mengina, Ricky Stuart, Laurie Daley, Bradley Clyde, Gary Belcher, Gary Coyne and Kevin Walters all in the team.

Lazarus, who won five premierships at three clubs, said the similarities between the famous 1989 team and the Raiders facing Sydney are obvious.

“They just love playing for each other and being around each other. It just reminds me so much of the 89-90-91 era. The style of players and certainly the camaraderie and the attitude is there,” Lazarus told AAP.

“We had really good outside backs, Belcher, (John) Ferguson, Paul Martin, these sorts of guys that could run like the wind and we’ve got a pretty handy back three playing for Canberra at the moment.

“The centres we had Daley and Meninga and now they’ve got (Jarrod) Croker and Joey (Leilua).

“But the forward pack is more similar than anything else, the way they play. Josh (Papalii) has played out of his skin this year and is a standout, very closely followed by John Bateman and Josh Hodgson.

“Take the hookers for instance – Steve Walters or Josh Hodgson? Who do you pick there? Front rowers – (Brent) Todd or Papalii?

“(Joe) Tapine played really well against South Sydney. I thought his defence was inspiring and Clyde could do that, he could inspire teams.

Then both teams have hard-working second rowers, so there are a lot of similarities there and I’m hoping they can do what we did in ’89.”

Canberra are in their first grand final since coach Ricky Stuart led the Green Machine to their third title in six years as a player in 1994, but face a huge task in upsetting the Roosters who have been strong all year.

Retired Roosters’ star Anthony Minichiello, who played in the Roosters’ drought-breaking premiership win in 2002, said he was confident his old club would win.

“We are looking at the start of a dynasty,” he  told the ABC.

“When Robbo [coach Trent Robinson] came on board in 2013, he’s been outstanding. He played for the club in the ’90s and instilled in players [the desire] to strive to be better each day.

The Roosters haven’t conceded a first-half try in their last four finals games, with Cronulla the last team to breach their defence in the first half of a playoff in last year’s qualifying final.

“Yeah, it sounds good. But as players we know we can do better than that,” Taukeiaho said on Friday. “I don’t think we have given our best defensive game yet to any team. The plan is to do it Sunday.

“I know others will look at it like that’s pretty good if a team is only scoring one try.

“Six points (conceded in a match) is still heaps for us and Trent Robinson.”

Premierships are built on defence and coach Trent Robinson has made that the core of everything since arriving in 2013. Players are given individual video homework and their own role in defence.

“Everyone has that hunger and brutality in them to go after players, whoever is running the ball,” Taukeiaho said.

It’s shown. The Roosters have been in the top two defensive outfits in the NRL in five of the seven years Robinson has been there.

In 41 games of Robinson’s 188 games in charge, they have kept opponents to single figures. In 11 of those matches it has been to nil.

“We worked so hard through the whole pre-season about defence, and we also set a task about not letting tries in,” Taukeiaho said.

“I don’t think we’ve done it this year. We’ve been so close and taken teams down to the last 10 minutes of a game.

“But we’ve just switched off and they’ve been able to score those points. We’ve got one more game to get it done.”

The Raiders are one of the few teams to have found the Roosters wanting this year, scoring a combined 42 points in their two losses to them this year.

Five-eighth Jack Wighton has been at the centre of much of that, setting up a try and three line breaks when the two teams met in Magic Round.

His solution for breaking the Roosters defence is simple.

“We have (scored points against them). We’ve got the strike power to do it. We’ve just got to be consistent and play the long game.”