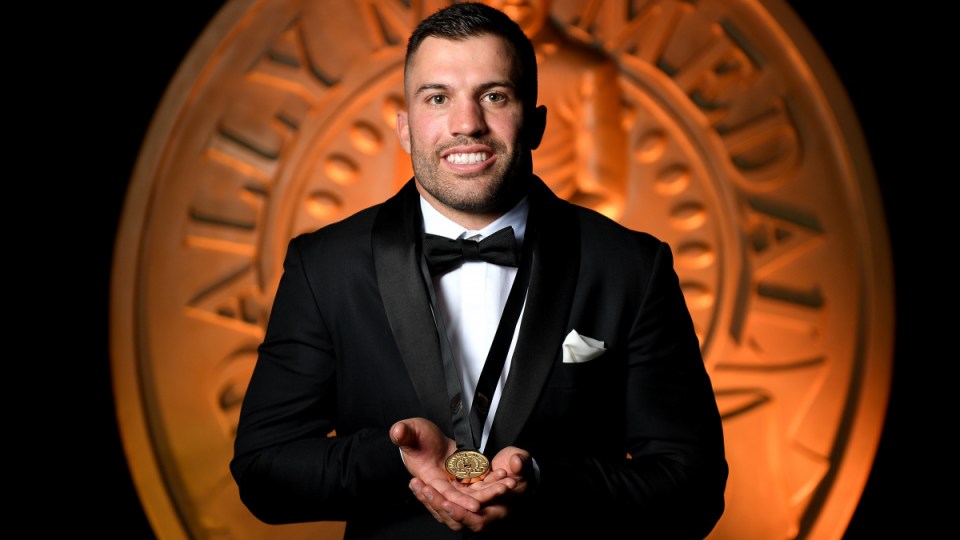 James Tedesco is on the verge of becoming the first player to complete rugby league’s individual grand slam, after one of the most dominant seasons in memory.

Tedesco romped in his win with 34 votes for the title throughout the night, the strongest effort since Jonathan Thurston’s 36 in 2007.2017.

Tedesco led the count by three points headed into the final round of voting, before he and Smith both polled one each in Round 25 to ensure Tedesco’s title.

“Everyone was telling me I was a big chance of winning, and I was a bit nervous there at the end,” Tedesco admitted.

“I actually thought Cameron was going to get the three at the end there. He has played so good for so many years now.

“I actually thought he was going to win. I’m glad it’s done now, I can just focus on Sunday.”

The honour comes after the 26-year-old also claimed the Wally Lewis Medal for the player of the State of Origin series, scoring the match-winning try in the series decider for NSW.

It also puts Tedesco on-track to set a new record by placing him one medal away from taking out every individual honour available to him.

The Clive Churchill Medal – awarded to the man-of-the-match in the grand final – is the only one now missing from Tedesco’s cabinet.

If the Roosters win on Sunday and Tedesco is man of the match, he would become the first player in history to win the Wally Lewis Medal, Dally M, grand final and Clive Churchill in the same year.

“It would be good (to win the Clive Churchill),” Tedesco said. “We’ve got so many good players in our team, and if we do our job anyone could receive the award.

“Our goal is to win the game, and then congratulations to whoever can win that award.”

The only other players to go close to achieving the feat are Johnathan Thurston and Peter Sterling.

Thurston claimed the Dally M and Clive Churchill in 2015 without the Wally Lewis Medal, while the State of Origin gong did not exist for Sterling in 1986.

In a glittering night for Tedesco at the Hordern Pavilion in Sydney, he was also the fullback of the year while the Origin-winning try was the Peter Frilingos headline moment of the season.

Parramatta halfback Mitchell Moses finished third on 29 in the overall count, while Broncos rookie Payne Haas was fourth on 27 points.

Haas was also named the NRL’s rookie of the year, just months after the powerful forward made his Origin debut for NSW.

Tedesco’s teammate Latrell Mitchell was the centre of the year, Moses was halfback and Smith both the hooker and captain of the year.f

Melbourne coach Craig Bellamy won the coach’s award, after his team took the minor premiership by six points before being bundled out of the finals in week three.

Meanwhile St George Illawarra centre Jessica Sergis was the Dally M female player of the year, ahead of her team’s NRLW grand final against Brisbane.