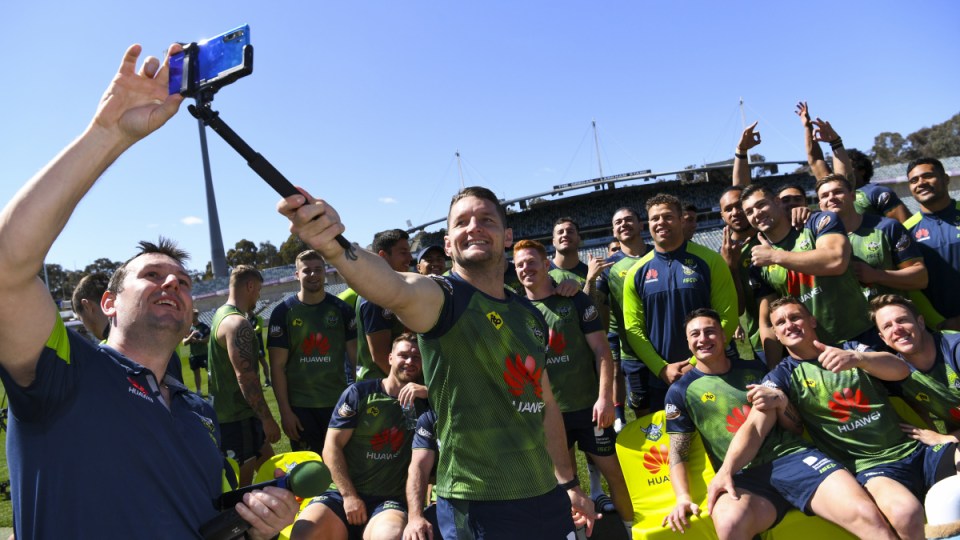 Take a look at yourself: Jarrod Croker of the Raiders takes a team selfie during a training session. Photo: AAP

To be at your best on grand final day requires extremely decisive planning around style of play and physical development of your players.

It is the variables that have to be overcome through the course of the year and a gruelling finals series that makes this extremely difficult.

The teams that make the finals have had to navigate and react to how other teams are developing, an ever-present injury list, how games are being officiated and even the rub of the green in the bounce of the ball.

All these unpredictable variables can be diminished by a strong club through instilling a strong culture, clear mental strength, complete preparation and absolute commitment to the team systems.

When looking at how the grand final teams have navigated these challenges, it is apparent that the Canberra Raiders and Sydney Roosters have taken different pathways to the top of the pile.

The Raiders have timed their run to perfection. Their best football is being played right now.

They had an up-and-down month leading into the semi-finals, but coach Ricky Stuart rested key players who needed time to recover from injury and rebuild energy.

He followed this up with a couple of hard-fought wins over top-eight teams mixed in with a timely kick up the backside from the Sea Eagles.

This reset their minds and focused attention on the job ahead.

The one constant during this period was their resolute commitment to defence, coupled with a visible team ethos to all their play.

Going to Melbourne is never an easy assignment, particularly in week one of the semis, but the upset in week one was a strong indicator of Canberra’s emergence to the top of the pile.

While Storm had periods of domination, Canberra over the 80 minutes created the most opportunities.

The ability to stay in the game when the stakes are at their highest is an essential component of winning the premiership.

For the Raiders to do this against Melbourne in the dying moments of the game sent a strong message they were the real deal.

Some may see the Raiders making the grand final as an achievement in itself, but I have zero doubt they are thinking this. Canberra knows it has the weaponry to take the game.

After such a long drought, the Raiders will be keen to back it up.

The Roosters started the season as competition favourites for good reason as their roster boasts the most complete top-20 players, along with an outstanding coaching staff led by Trent Robinson.

Robinson’s team of mentors have a progressive approach to personal and professional development of their players.

Even during the season when they drifted in form or suffered injuries to key players, you always had the feeling that the focus was on peaking in early October.

The speed hump they hit in the last game of the regular season when losing to Souths was answered in a resounding manner.

The return of Luke Keary to the team in a semi-final allowed it to wipe the floor with the Rabbitohs, racking up 30 points.

Last year’s grand final replay against Storm didn’t produce the spectacle at the SCG that many of us were hoping.

Both teams showed stunning defensive attitude on their goal lines, but neither really were able to get into the attacking flow that had been witnessed during the regular season.

The Roosters’ win certainly wasn’t a walk in the park, but really was also never in doubt.

Robinson will definitely take the opportunity to drill improvement on all levels as he prepares his men for Sunday’s match.

The Roosters do a fantastic job of creating storylines for players to grab hold of every week.

This helps them to elevate their focus and prepare with intensity.

So be assured it won’t be just the inclusion of Jared Waerea-Hargreaves and possibly Jake Friend that takes them to the next level – the entire team is being equipped this week with the physical, mental and emotional resources to play their best game.

So who wins and why?

As canvassed, peak performance is a quality that is not everpresent – just like standing on the top of Everest you don’t get to stay there long.

Both the grand finalists deserve their place in the big game because they have been able to outlast the marathon that is a tough NRL season while winning consistently when not at their best.

The winner must have their top game in gear for the full 80 minutes, with the understanding there will be setbacks that could knock them off their game plan.

Both teams have the potential to do this, but the 17 men representing Sydney Roosters are most likely to do it because the quality of the personnel just slightly shades the Raiders.

That said, the Raiders are an unpredictable unit.

It doesn’t take much to knock even the best off a mountain.