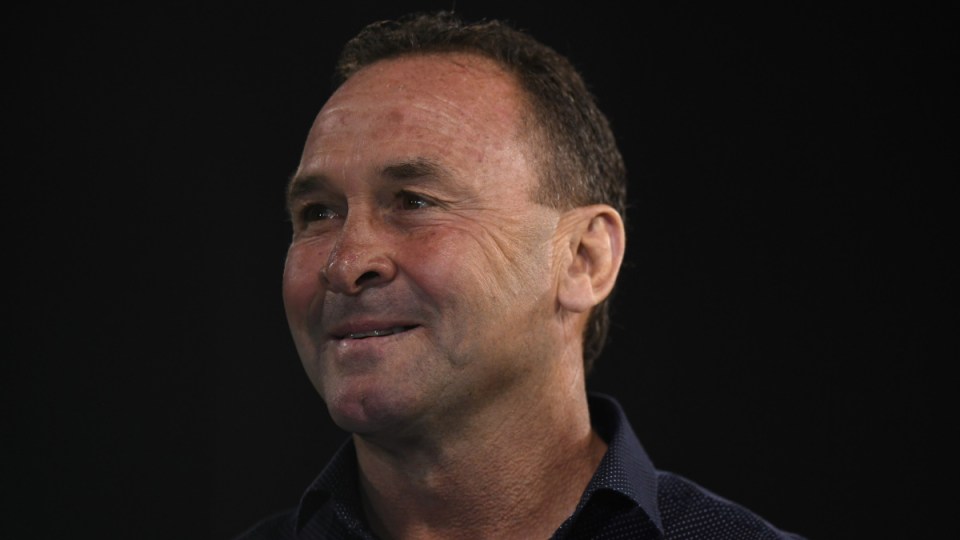 Canberra hero: Ricky Stuart was all smiles after winning through to the NRL grand final Photo: AAP

Twenty five years. That’s how it has been since the Canberra Raiders made an NRL grand final.

It seems like a lifetime ago, and that’s because it is.

It was thrilling to see the Raiders book their spot in the decider against the Sydney Roosters next weekend with a tough and gritty win over South Sydney.

It is fitting that their coach is Ricky ‘Sticky’ Stuart, one of their club’s greatest players and a star in that 1994 grand final victory, who has led them all the way to the big dance.

Stuart’s coaching reputation was in tatters when he abruptly left Parramatta to return to the ACT in 2014.

He had been successful at the Roosters, but struggled at the Sharks and Eels.

Since then the 52-year-old has turned around Canberra and the Green Machine is finally back with a chance to win the big one.

Helping ‘Sticky’ get the Raiders into the grand final was their English quartet.

Hodgson has been phenomenal all season and made a team-high 48 tackles against Souths, along with a crucial ball steal.

Bateman has been the best buy in the NRL this year and he was heroic once again making 108 metres, 11 hit-ups, 39 tackles, one tackle bust and two offloads.</p> <p>

Whitehead’s numbers might not have been as eye-catching as the other two, but he is completely dependable and consistent, and played the full 80 minutes working his guts out.

Canberra’s UK connection has given it real teeth and fight, something the Raiders lacked in the past, and it has undoubtedly been the spark behind their rise in the past few years.

One of Canberra’s best this season has also been forward Josh Papalii.

Moved from the back row to the front row, a trimmed-down Papalii has been brilliant.

It was his bullocking late try that sealed the win over the Bunnies.

There was some doubt whether the prop might miss the grand final, after a big tackle on Souths fullback Adam Doueihi, but he has escaped sanction from the match review committee.

It’s a huge relief for the Raiders.

If they are to knock off the defending champions Roosters, and win their first premiership in 25 years, then they need the big Kiwi-born enforcer firing on all cylinders.

Early biff, prepare to be binned

Just like the Canberra-Souths game, the Sydney Roosters v Melbourne Storm game at the SCG was enthralling, tense and dramatic.

It all kicked off after the first carry when man mountain Nelson Asofa-Solomona went toe to toe with Sio Siua Taukeiaho.

The stink saw both forwards sin-binned very early, something that is thankfully rare these days

The referees have set the precedent, you punch and you’re off.

Many fans are not happy about it, but if you want to see people fight then go watch boxing or UFC.

Cooper Cronk’s last game will be his ninth grand final.

It is a crazy stat that Cronk will have played in nine grand finals in his 16 seasons in the NRL.

The man is a freak. But another decider is a fitting end for his heroic halfback to bow out.

The 35-year-old was a key part of the Melbourne machine from 2004 to 2017, part of the ‘Big Three’ that helped Storm romp to trophy after trophy.

He then jumped ship to the Roosters at the end of 2017, famously leading them to grand final glory over Melbourne last year with a broken scapula.

Cronk has no such injury worries this time round and his huge talent has not diminished one iota. In fact, it seems he could easily play on for another season.

Regardless of the result next weekend, don’t expect any return bout. The boy from south Brisbane will be sorely missed next year.

Robinson is the coaching GOAT

Just like his halfback, Chooks’ coach Trent Robinson has a remarkable record.

Under his direction the Tricolours have also won minor premierships in 2013, 2014, 2015 and 2018, further demonstrating their amazing consistency.

He was the youngest coach in the competition when he arrived at the SFS in 2013 at 35, and now at 42 he appears to be getting better and better.

The ex-Parramatta and Wests forward is up there with Craig Bellamy and Wayne Bennett in the discussion as the best coach in the world, undoubtedly.