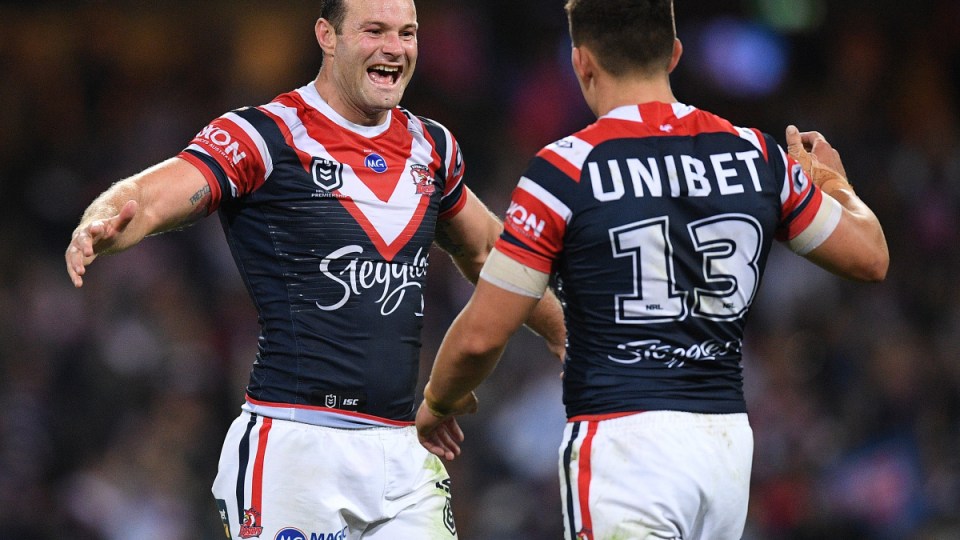 Boyd Cordner and Victor Radley of the Roosters celebrate at the end of the NRL Preliminary Final Photo: AAP

The Sydney Roosters are 80 minutes away from becoming the first back-to-back premiers in 26 years after a gritty and bloody 14-6 win over Melbourne to advance to the NRL grand final.

It gives Trent Robinson’s side a chance to send retiring halfback Cooper Cronk out as a premiership hero, as the ex-Storm champion seeks a third-straight grand final win.

The Storm finished Saturday night’s match with just two men on the bench after losing Felise Kaufusi and Ryan Papenhuyzen to head knocks, while Roosters veteran Mitchell Aubusson also ended the game watching from the sheds with a concussion.

Robinson has a big decision on his hands whether to bring co-captain Jake Friend back into the side, having missed the past two months with a fractured forearm.

The Storm were gutsy in the second half but James Tedesco’s 69th-minute try gave his side the knockout blow and set up a date with Canberra in next Sunday’s season decider at ANZ Stadium.

Nelson Asofa-Solomona and Sio Siua Taukeiaho set the tempo when both were sin-binned after just 20 seconds, coming to blows following the first hit-up, allowing Latrell Mitchell to give his side a 2-0 lead.

Roosters five-eighth Luke Keary faces a nervous wait for a 24th-minute incident which left Kaufusi concussed and forced him off for the rest of the game.

After Keary took offence to a fend to the face, he pulled out a clump of Kaufusi’s hair before hitting him around the neck with a swinging arm.

Keary also finished the game hobbling after struggling all week with an ankle injury.

Roosters prop Zane Tetevano will also be scrutinised after being put on report for a high shot on Papenhuyzen.

The only try of the first half came when Daniel Tupou leapt above the Storm pack and batted it back to Roosters skipper Boyd Cordner, giving his side an 8-0 lead at the break.

Asofa-Solomona had only been back on the field for two minutes, after replacing Jesse Bromwich who was temporarily off for a head injury assessment, when he crashed over to make it 8-6 in the 49th minute.

After a Jahrome Hughes break gave his side field position, Brandon Smith gave his side a quick play-the-ball and Cameron Smith sent his prop hurtling over Cronk and Aubusson.

Joey Manu looked like he had extended his side’s advantage but was turned down by the bunker after Tedesco was ruled to have knocked it on in an aerial contest with Cameron Munster.

But Tedesco soon made amends, sliding over after an Angus Crichton break, sending the 32,814-strong crowd into raptures.

“We can improve on tonight, I was really proud of them but we’ve got better than what we did tonight,” Robinson said.

I felt like we could have had a zero there but we didn’t get it. We has maybe four or five poor tackling plays.”

Storm coach Craig Bellamy said he was proud of his side despite bowing out one game short of the grand final, pointing out they won the minor premiership.

“We had a lot younger squad this year, to what they did during the year was quite exceptional.

“There’s two trophies up for grabs. I know one is a whole lot bigger than the other one but we’ve got to console ourselves we won the minor one.”