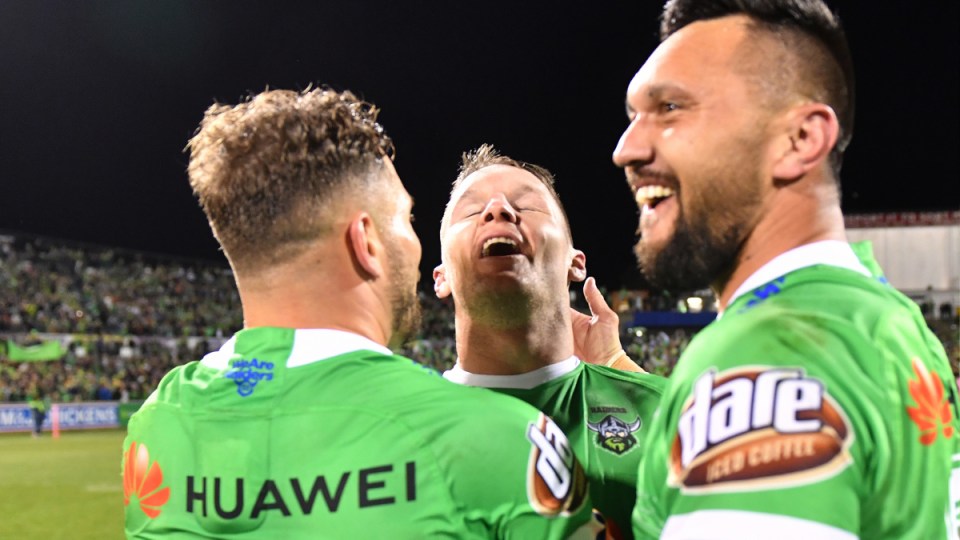 Aiden Sezer, Jarrod Croker and Jordan Rapana of the Raiders celebrate after their win. Photo: AAP

Canberra is into its first NRL grand final in 25 years after beating South Sydney 16-10, despite being a man down for the final 10 minutes.

Charnze Nicoll-Klokstad was sin-binned on Friday night for a professional foul in the 70th minute, but the Raiders rallied before Josh Papalii burst through to score the match-winning try in front of a record crowd at GIO Stadium.

Coach Ricky Stuart has taken Canberra to its first grand final since helping the Green Machine to their last premiership as a player in 1994.

The Raiders’ season has been defined by defence and, for their biggest home crowd in club history, they again stood strong.

Three times in the first half, the Rabbitohs looked certain to score and were denied as the Canberra wall couldn’t be penetrated.

“But defensively, you can’t defend like that if you don’t believe in each other and don’t have the trust and camaraderie.

It’s not just defensive strategy and it’s not just structures, you’ve got to have trust. If you’re not mates with each other, there’s no trust.”

Souths crossed first through Alex Johnston but the pass from Campbell Graham was ruled to have come off the ground while he was being tackled and the try was disallowed.

Rabbitohs coach Wayne Bennett said they were prepared for one-on-one strips but they couldn’t stop Hodgson pick-pocketing Ethan Lowe in the 13th minute.

A few plays later, Hodgson grubbered through and, when Corey Allan tried to escape the in-goal, Hodgson made the tackle which forced the ball free and Jarrod Croker pounced to score.

Croker converted but, five minutes later, he lined up a penalty almost in front and 30 metres out but hooked it wide to keep the score 6-0.

Souths earned an attacking scrum in the 26th minute and Dylan Walker burst through, looking certain to score, only to get stripped on the line by Hodgson.

But the Rabbitohs wouldn’t be denied from their next scrum set piece when the ball moved through the hands before Dane Gagai cut through to score in the corner.

Reynolds slotted the sideline conversion to lock up the scores in the 30th minute.

Souths were gifted the ball back just minutes later. Damien Cook darted out of dummy-half and found Teita Tatola who looked to have scored between the posts but was ruled short.

The half ended with the crowd of 26,567 in raptures as Jack Wighton raced 50m downfield but was pulled down by Gagai.

But the Raiders’ faithful didn’t have to wait long in the second half to get back on their feet for Wighton after the five-eighth scored a brilliant individual try.

Souths fullback Adam Doueihi couldn’t take a bomb and Wighton scooped up the loose ball before dropping it onto his foot and scoring in the corner.

Croker’s sideline conversion hit the upright in the 45th minute.

Papalii was put on report for contact with his shoulder to the head of Doueihi in the 50th minute but will be confident of playing in the decider.

Souths threw everything at Canberra, having all the ball in the second half, but the defence was equal to the challenge.

The Raiders finally managed to get some ball and were on the attack in the 70th minute when Reynolds intercepted and ran 60 metres before Nicoll-Klokstad chased him down, but was binned for holding on too long.

Doueihi knocked on in the 74th minute before Papalii powered his way over from 10 metres out to send the crowd wild.

“Unfortunately at this level trying doesn’t get the job done for you. You either do it or you don’t, and we didn’t do it,” Bennett said.

“I just think we executed poorly.”

The Raiders will face Melbourne or the Sydney Roosters in the grand final.

Raiders into their first NRL grand final for 25 years